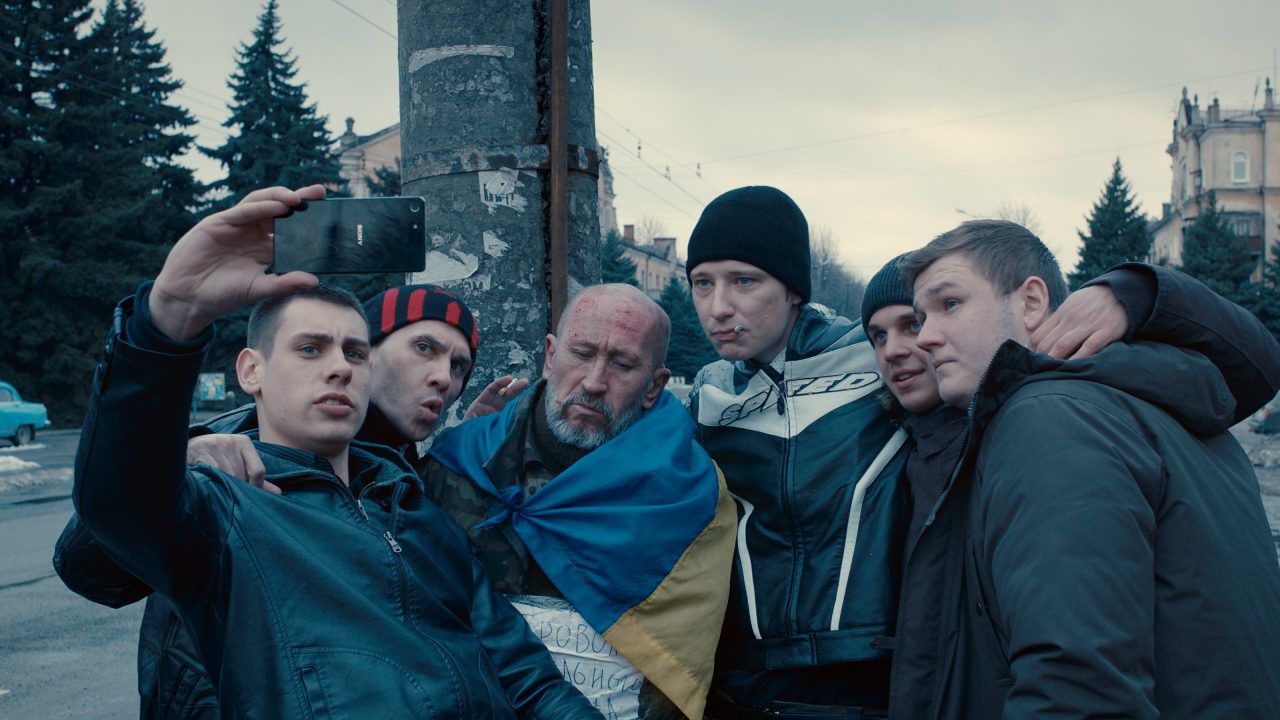 “We have one mother. One mother for all. She is sick.” So says a disaffected militant midway through Sergei Loznitsa’s Donbass, a pseudo-documentary with blacker than black humour that works only perfunctorily, a potentially smart move on Loznitsa’s part squandered by his inability to establish a tone and stick with it. And boy does he paint a very bleak portrait of his home nation, as lethargic as his directorial style.

Using a vignette form with some admittedly well-executed transitions, Donbass takes aim at the fake news, fractured alliance, corrosive and explosive society of Ukraine circa 2014 but almost definitely still repercussive today. We get actors in trailers prepping for news shoots, MPs with shit on their head, maternity wards that are criminally undersupplied, and fascisistic factions colliding, stealing cars and beating so-called “exterminators” in the name of ‘freedom’. If it sounds full-on, that’s because it is. And if it sounds too much, then bingo… it is.

No context is overly necessary to understand the political agendas being attacked as the imagery is about as subtle as a Trump tweet about Kim Jong-Un’s “big button”. Weaponised media raiding scenes of devastation like a crack squad of Seals, camera clicks like gunshots firing off left, right, and centre, and TV crews like militia are conveyed well enough, with the soundscape provided representing an appreciated and mostly effective counterbalance for the drab cinematography and uninspiring performances. Donbass is an aural arousal of our collective attention, and a consistent visual attempt to lose it that the latter achieves with ease.

The saddest thing about the film is the fact that the very last scene is the only one where everything the film aims for is achieved. It is uncomfortable, jet black in humour, and a hell of an allegory for the sensationalist and propaganda-perpetuating media who control the way we see the world we live in. As a massacre takes place in a make-up trailer, civil services and news crews alike flock to the scene, concocting a sensationalist spin on events to fit their political agendas in an act of gross propagandising and self-preservation. If the first scene, whereby the occupants of the trailer are set up as a cog in the media machine that are as to blame as anyone, and the last as just described, were a short film, it’d be worthy of some real buzz and attention, but in its cumbersome 2 hour full form it is just a bit overlaboured and a lot underwhelming.

The film ultimately ends up like a fist to a wall – full of punch and high intensity, but delivered in a way that does nothing that isn’t self-destructive or achievable by anyone else. It is daft raw, entirely regrettable. And that really is a knockout blow that Loznitsa aimed at a broken country and only landed on himself.

Donbass is currently not scheduled for UK distribution but was premiered at Cannes.

CHECK OUT AN EXCLUSIVE CLIP BELOW.