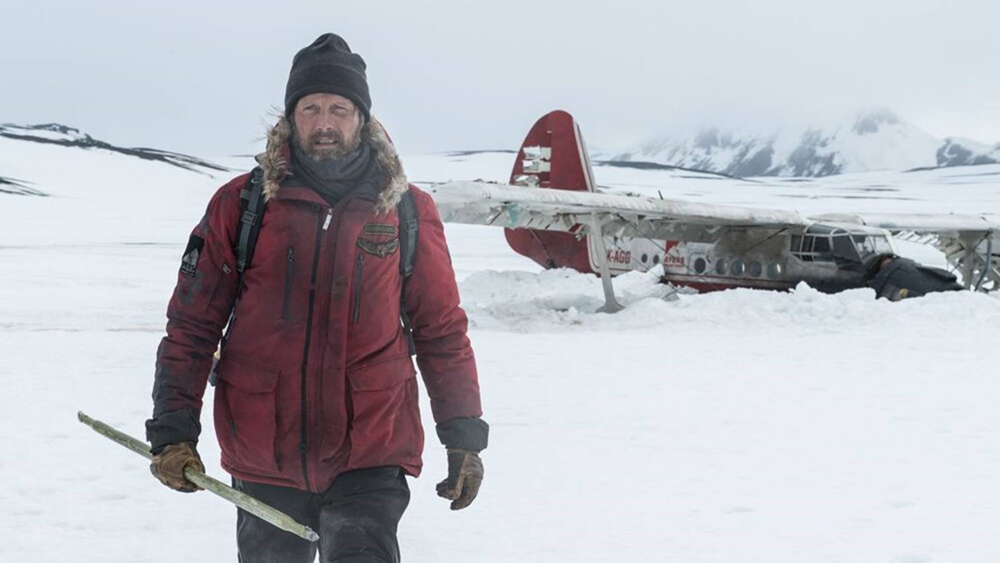 Mads Mikkelsen is THE man. Move over Castaway, The Grey, All Is Lost, The Revenant… Arctic is the definitive Man VS Nature film.

The film picks up several weeks into the plight of light aircraft captain Overgård (Mikkelsen), who finds himself stranded in the vast abyss that is the Arctic. His daily routine consists of baiting for fish, trying to pick up a signal to call for help, and working to keep a giant SOS sign carved into the ice. He has a primal machismo and a steeliness in the face of the unforgiving clime, resolutely waiting for someone, anyone to come. When help finally does arrive, a tragic turn of events leaves Overgård more desperate than ever, and custodian of a young woman who is fighting for her life with severe injuries. Spurred on by the bleakness of his predicament and a desire to protect this woman, Overgård embarks upon a perilous journey across the Arctic, where it is not only the bitter cold that threatens his and the young woman’s life.

What can I say? Honestly, Arctic is breathtaking.  With no clear narrative or context, scarce dialogue and a virtually solo character focus, set in the most barren of landscapes, the omens for the film were about as positive as Overgård’s chances of surviving his hellish test of mettle. But by Christ is the end product sensational.

Mikkelsen is relentless, an unbreakable spirit in a broken body and driven not by his own will to survive, but by a will to protect. He is intense, committed, and delivers an absolute powerhouse of a performance, exuding strength in mind and body to such a tenacious extent that the sinews of his very being throb before our eyes. And yet there is more to him, a fragility and a sensitivity, a glowing humanity that is drawn out by the young woman whose life hangs in the balance and whose continuous squeezes of his hand give him hope and a reason to earnestly say it’ll be okay, even when things appear insurmountable. He sheds tears from his raw eyes and his lips quiver as his worst fears come to light, and when he must use his voice there is purpose and agony fuelling every line. From Jagten to Hannibal to Rogue One to this, Mikkelsen is showing truly remarkable range and is at the peak of his acting powers, with Arctic showing us the brute force of the man’s capabilities both in character and in performance.

Joe Penna’s direction is superb, unafraid to expose the brutality of nature in the seemingly innocuous challenges it poses… a ten minute scene centred around pulling a sled up a hill may sound tedious, but in Penna’s film it is as tense and as taut as the rope that just won’t give for Overgård. The unpredictable terrain is an everpresent threat, and the stark white landscapes and lashings of blizzard snow cut a beautiful and ominous canvas from which Penna’s film is cut. The camerawork is faultless and the desolation and isolation of Overgård is evoked masterfully.

The score too is phenomenal, adding true heft to the dramatic scenery and emotional weight to the peaks and troughs of Overgård’s unwanted but unavoidable expedition, punctuating every smile and every cry of pain with absolute finesse and conviction. The soundscape of the Arctic eradicates any fears for a lack of verbality, mastering the art of sparse dialogue in a way that All Is Lost failed to and Cast Away cheated to avoid.

Overwhelmingly though, this film seems to come around time and time again to a core moral purpose. It explores the immeasurable strength that the belief in one person to care for another can produce, giving rise to miracles of deliverance and salvaging even the most impossibly dark moments. To see a survival film where the survival is subordinate to the desire to save another’s life is revolutionary and emotionally packs a huge punch. Though the film has a relentless slew of defeats for the protagonist, and offers little by way of joy, it is utterly enthralling and never for one second loosens its grip on the audience.

We are in it with Mikkelsen from that first shot to the last, our hearts in synchronicity with our hero and every last emotion he feels translating through the screen into our very hubris. The ending is ambiguous, in some ways disappointingly so and in others only rightfully so, but there is an unmistakable victory in the stoic human spirit and power of belief Overgard displays – one’s body may be broken, but the spirit can never truly shatter, flickering away like a lighter in the vast Antarctic planes, promising hope in the most hopeless of times.

A stunning, brutal, remarkable film that falls just short of magnificence but rises well above mere decency as an outstanding work within an ever-intriguing genre.

Arctic does not currently have a UK release date, but if it attains one then you will hear it here first.

Check out an exclusive clip from the film BELOW.