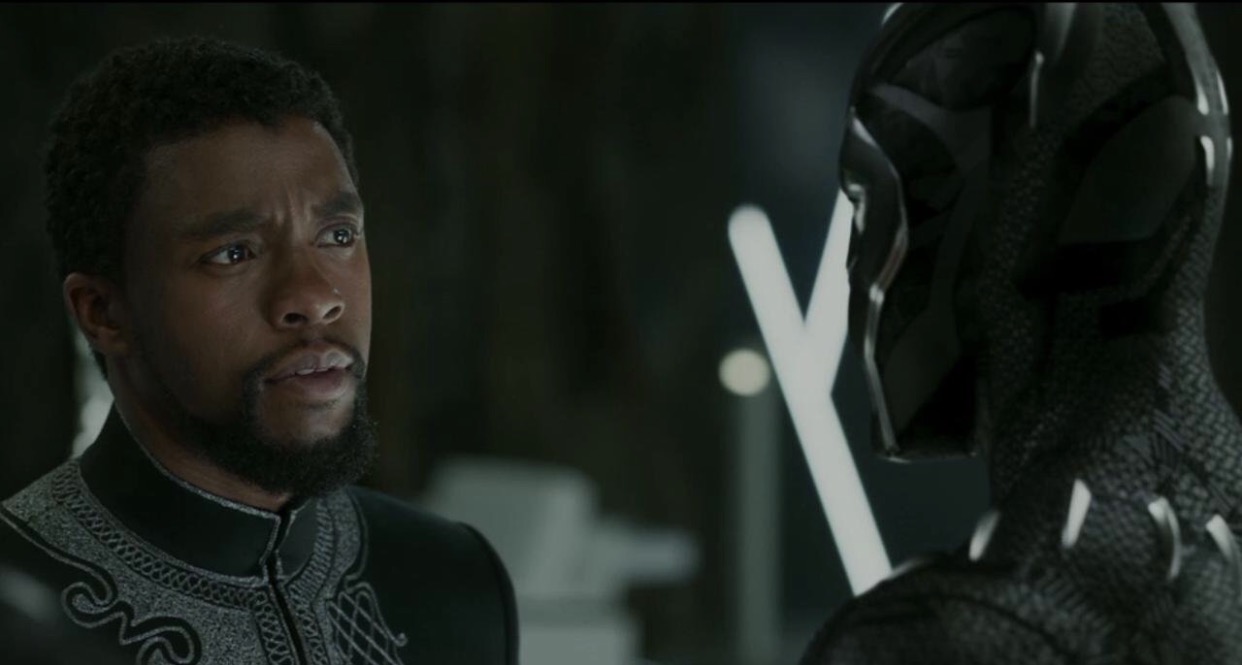 Marvel Studios have really hit their stride over the past decade. For 10 years, they have given us so many memorable moments, found a formula that has spanned across now 18 films, working more often than not, and made us wait until the end credits for a snippet of footage or absolutely nothing at all; they really do have the fans and audience members hook, line and sinker. 2018 is a big year for the MCU (Marvel Cinematic Universe), as we finally get to see what has been building for those 10 years; Avengers: Infinity War. But before that, we have had arguably just as big as a film; Black Panther, and for me, this one definitely lived up to my expectations.

Black Panther is set after the events of Civil War, and see’s T’Challa (Chadwick Bosman) return to Wakanda following the death of his father, T’Chaka (John Kani). With all of the responsibilities falling on him as to either maintain Wakanda’s secrecy or branch out into the wider world, Erik ‘Killmonger’ Stevens (Michael B. Jordan) has other plans for their enhanced resources. The balance of wit, passion, heart, action, vengeance and culture allowed the film to flow seamlessly. You didn’t have to overanalyse whether something belonged or not, you could just enjoy it and move on. Not one area overpowered another, which is very difficult to do in a film of this magnitude.

Chadwick Bosman is very good as both the T’Challa and the Black Panther. He balances the emotion of a leader with the love he has for his family and relationships he has established within his new found kingdom, whilst having the knowledge, wisdom and strength as a warrior. Michael B. Jordan is a welcomed edition to the MCU in his second outing as a Marvel character, playing his villainous Killmonger superbly, and pushing the boundaries towards some of the very best we’ve seen so far. Lupita Nyong’o, Danni Gurira, Martin Freeman, Daniel Kaluuya, Winston Duke, Angela Bassett, Forest Whitaker and Andy Sekris are all exceptional in addition, but are outshone by Letitia Wright’s character Shuri, the 16-year-old sister of T’Challa, who is an engineer and tech genius, responsible for a lot of the inventions in Wakanda. Not only is she such an inspiring character for young woman, she also has the best lines, creating a memorable performance. I look forward to seeing a few reprisals in Infinity War.

I enjoyed the insight into the African culture on display, with the costumes a real standout feature. From the Dora Milaje and Border Tribe warrior armour, to the robes that T’Challa sports and garments the likes of Niakia (Nyong’o) and Ramonda (Bassett) wore, were vibrant and beautiful. The explanation of plot points and background of characters, key to any origin story, were easily and thoroughly laid out, which is something that really pleased me, because they can sometimes be clouded by the overall arc of the film. Another cool feature was the freedom of gadgets and setting that this film had. It is truly stunning to watch the fusion of Africa with technology beyond comprehension. The best part about it, is that it doesn’t look out of place in the slightest, which was rounded perfectly by Ludwig Goransson’s score and an album produced by Kendrick Lemar. I cannot praise the director Ryan Coogler enough for steering this film with obvious passion and pride.

For me, it’s a film that I watched and instantly came away thinking “that was just sublime from start to finish”. As a fan of the Marvel franchise, it is instantly one of my favourites, and rivals, in my opinion, the MCU’s best; Captain America: The Winter Soldier and both Guardians of the Galaxy films, while being the best origin story we’ve seen from one of the characters. “Wakanda forever”, what the proud characters in this movie live by is something that, after this film, will most definitely live up to the definition of everlasting. It does more than just become another clog on the Marvel Studios spoke wheel. It has a defining place in cinematic history that will stand the test of time, with the buzz and attention surrounding what, in my opinion, is an outstanding film.

Black Panther is in cinemas everywhere now, and will be showing at Pontio from Friday 23rd March till Tuesday 3rd April.

Black Panther will also return in Avengers: Infinity War! Click on the image below to read our 10 Year In The Making article and see the trailer for yourself!