Ant-Man and The Wasp:
A somewhat forgotten about MCU (Marvel Cinematic Universe) film with Black Panther and Avengers: Infinity War headlining 2018 for Marvel Studios. However, off of the success of the first one, with how good the trailer looks and, from the looks of the snippet, sticking to a similar formula, it will undoubtedly be as good as the original, and keep up with the standard the MCU has set itself.

Deadpool 2:
Back in 2016, we saw what many people felt should have come a long time before; a R-rated, fourth wall breaking, comedic and violent Deadpool that pushed all the boundaries to the limit and won over everyone who saw it. Ryan Reynolds’ hard fought, 11 year battle with 20th Century Fox finally paid off, (with the help of leaked test footage) and the rest, as they say, is history. So when a sequel was immediately green lit after it hit cinemas, fans from all over have been so excited to see what’s next. We had a ‘Wet on Wet’, Bob Ross inspired teaser that only showed seconds of actually footage, but then on the 7th February, we saw more than a glimpse, and how spectacular it was in the most Deadpool way; it won’t disappoint! 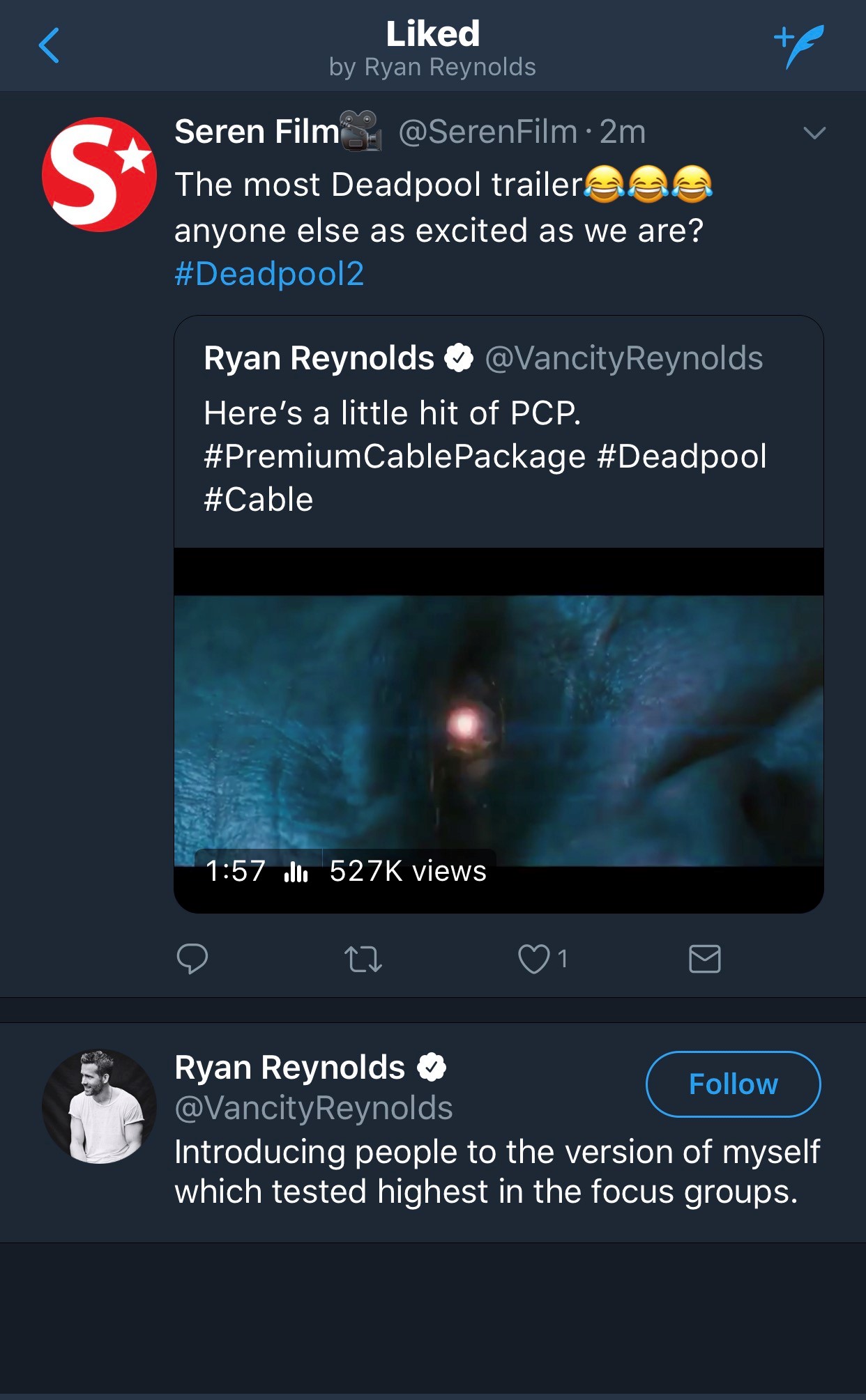 Deadpool himself, Ryan Reynolds, liked our retweet of the new Deadpool 2 trailer.

Jurassic World: Fallen Kingdom:
Another addition to one of Steven Spielberg’s beloved franchise’s, and the trailer looks as if it will both terrify us with huge, rampaging dinosaurs, yet pull at our heartstrings as the bond between man and beast will be tested. Either way, I’m sure fans will be in for something spectacular.

Mission Impossible: Fallout:
This is the sixth instalment of the Ethan Hunt (Tom Cruise) saga, and the trailer is definitely giving off some Spectre meets John Wick vibes at the beginning. As expected though, it finishes with some outrageously extravagant stunts and action that the Mission Impossible franchise has become known for. After Cruise was injured during filiming, it will make for interesting viewing to see what dangerous situation he’s got himself into this time.

Skyscraper:
Dwayne Johnson stars in what I hope doesn’t turnout to be a blockbuster flop in terms of quality like Geostorm became late last year among audiences and critics. From the trailer, it looks to have a solid plot that will explore some interesting themes, and if all goes to plan, will further cement The Rock’s place as one of Hollywood’s biggest driving forces.

Solo: A Star Wars Story:
A film that has been shrouded in directorial departures, questions about the lead actor, and confusion from Star Wars fans as to why it isn’t titled ‘Obi-Wan’ or ‘Kenobi: A Star Wars Story’. However, it seems the trailer will have people just a little bit excited. Ron Howard seems to have steadied the Millennium Falcon, bringing us the first taste just a few months before release. I for one, am looking forward to something a bit different from the Star Wars franchise that will surprise fans and company a like.

Venom:
Sony are attempt another Spider-Man film by producing Venom, who we saw back in 2007 in Spider-Man 3, but no where near to his full potential. However, this new movie, starring Tom Hardy as Eddie Brock, the host of the venom symbiote, looks like it will focus on when Brock becomes harmonized with Venom, and look into the tribulations he must deal with as a result on a personal level. The only downside is that it won’t be part of the MCU (Marvel Cinematic Universe).