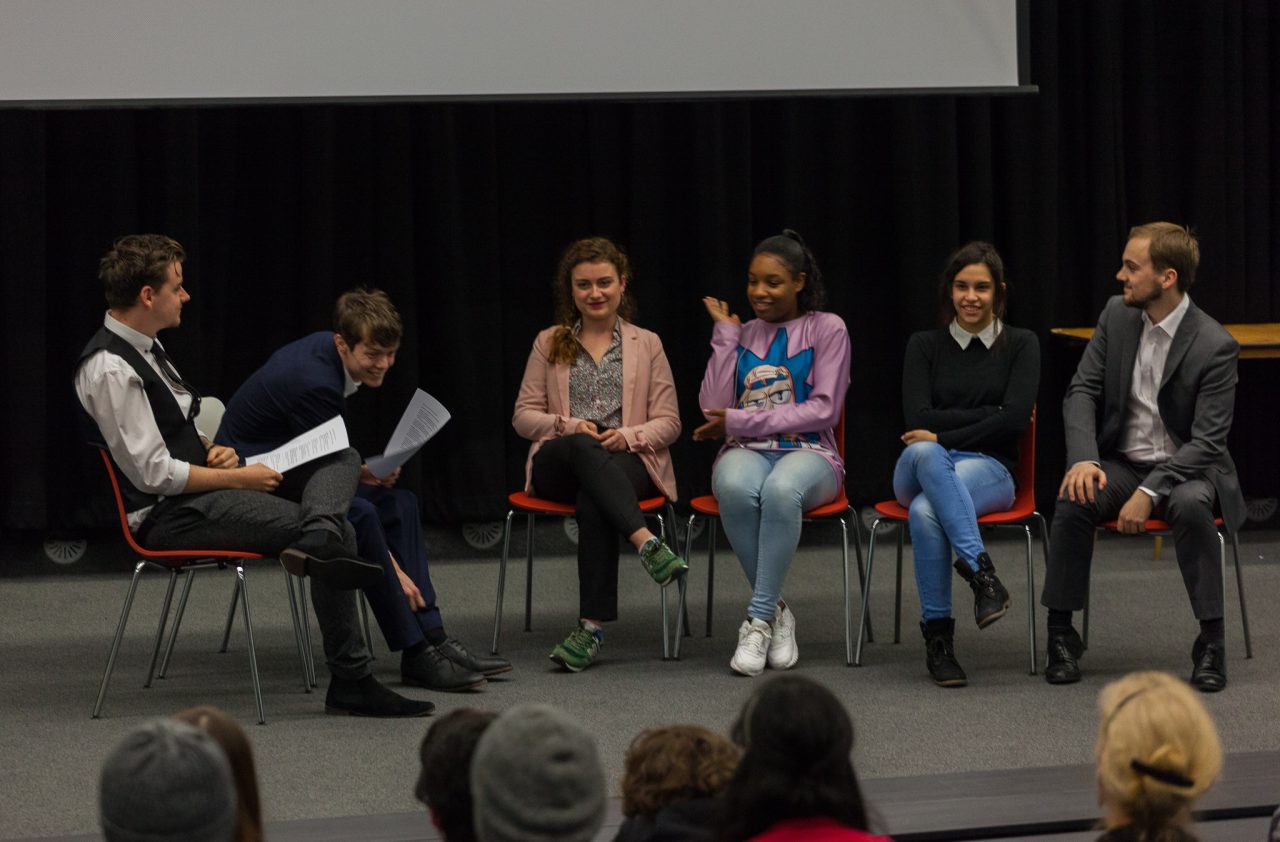 On Friday 8th December, the Film Society held their first showcase of the academic year. The Winter Showcase was made up of 7 short film screenings of varying genres, as well as Q&A sessions with a representative from each film crew. Each group came up with their own original concepts based on the theme of phobia, leading to a plethora of different ideas. It was really encouraging to see how the various groups had created wildly different interpretations from the same key topic. These shorts included a music video and a comedy, alongside a few dramas. Below, you can find a brief synopsis of each film;

Quakers: A comedy short in which a blogger moves into their new house and decides to video their experience. Upon watching back the footage, the blogger notices a duck in the background and things get very weird, very quickly.

A Call For Help: Charlie is terrified of phones. Her job is at stake because of this and things only get worse when she gets trapped in an elevator. When she is literally stuck, will she call for help?

Mirra: A music video with cinematography at its core. The video follows a young couple and plays with the notions of reflections and the way in which they trigger memories.

Hiraeth: In this film, the protagonist is afraid of many things, but mostly, herself. The short sets out to emulate the feelings of someone struggling with self-hatred.

Broken: After his headphones break, Jack tries his best to fill the silence until his new pair arrive. This proves rather difficult when his flatmate starts complaining about Jack’s loud music.

Dear Mother: This very visceral story shows a woman as she struggles to come to terms with the broken relationship between herself and her mother when she is forced to visit her in hospital. A series of flashbacks are very telling of her volatile upbringing and how it has shaped her adult life.

Jane Says: The film follows the protagonist over the course of a week as she tackles social anxiety, trying extremely hard to avoid everyone, getting pretty inventive with the ways in which she does this.

“I think I was most impressed by the wide variety of content that was produced, along with the quality of the films themselves”

For a lot of crew members, this was their first time making a film and being on a set; but from the answers given during the Q&A session, it was incredibly transparent not only that the members had learnt a lot, but also had plenty of fun in the process.

President of the Film Society, Lee Carson, said “The showcase was a great night. It was amazing to see so many first time filmmakers get to experience their very own work on the big screen”, and amazing it was. There was a clear buzz in the room. You could feel the anticipation of the members and the excitement from seeing their work on a big screen for the first time.

He continued to say “I think I was most impressed by the wide variety of content that was produced, along with the quality of the films themselves. I have to say, I’m quite proud of what all the members achieved over this semester and I’m more than ready to see the bigger and better work that will come out of the society in the next semester.”

Ultimately, the showcase gave us a sweet taster of what is yet to come. It was clear from this event that there is an abundance of enthusiastic people within the society and lots of new talent. With those two things combined, the only possible outcome is great films. The society will be holding another showcase in summer, one that promises to be even bigger and better. But for now, you can find the phobia short films (mentioned above) online on the society’s YouTube channel.

If you want to hear more from the Film Society or get more information follow us on social media: