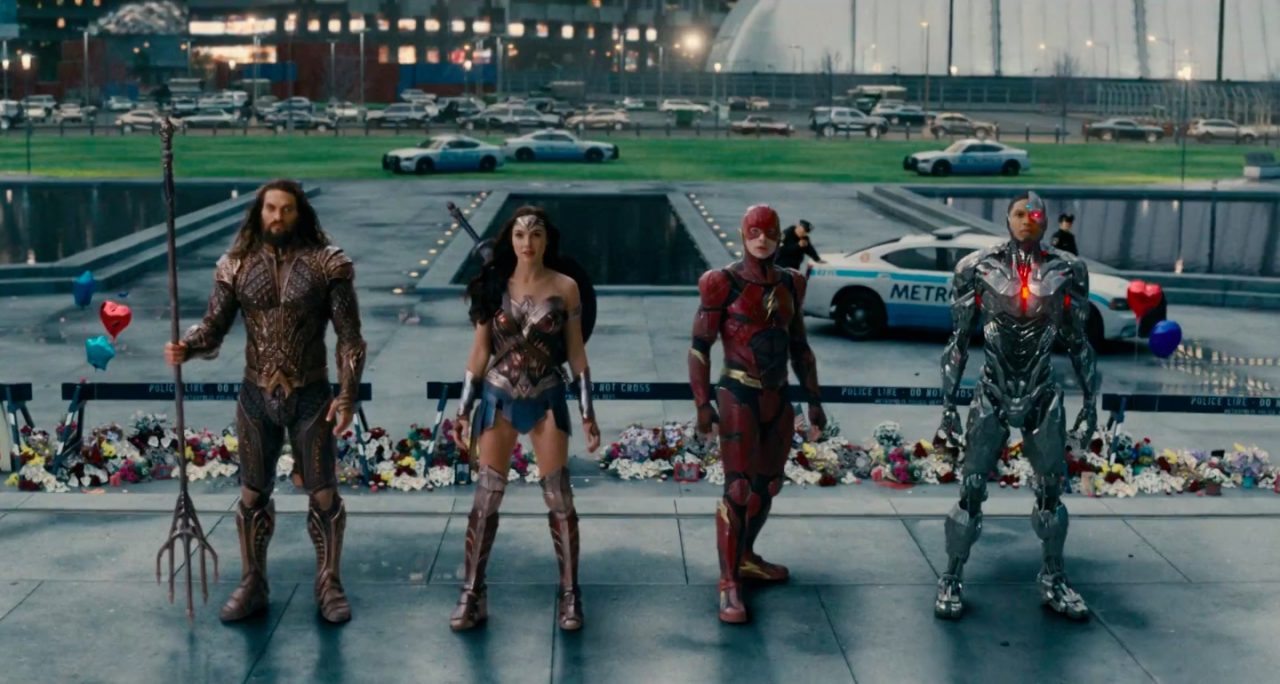 Warner Bros. have a vast spectrum of media under their DC (Detective Comics) umbrella, including films such as The Dark Knight trilogy, many successful feature length animations like Justice League: Flashpoint Paradox and television series’, such as Batman: The Animated Series. Since 2011, Warner Bros. have marketed the DCEU (DC Entertainment Universe), in which their current batch of motion pictures films would come to life in the modern era, with a continuing timeline where the stories would align and allow the characters to interact.

First came Man of Steel, with Henry Cavill performing superbly as Superman; then Batman v Superman: Dawn of Justice saw Ben Affleck’s take on the Dark Knight, before Suicide Squad and Gal Gadot’s fearless and empowering portrayal of Wonder Woman. And now, the big one; Justice League. Any DC or comic book fan has been dreaming of this since they can’t remember when. It is something that many have been hoping and waiting to hit cinemas; so after arriving, the big question is, did it deliver?

In wake of the events after Batman v Superman, the world is left in mourning after the death of the Kryptonian hero. Meanwhile, Batman is learning of an evil threat that is upon the horizon after parademon spotting’s have become increasingly frequent, and he must assemble a team that has the ability to overcome the challenge ahead.

As with any superhero film in the present day, casting is a topical fan debate, as many have their ideal choice for the role which they may or, most likely, may not receive. Ben Affleck and Gal Gadot reprised their roles of Batman and Wonder Woman respectively, carrying on the great work from their previous performances. Ezra Miller as The Flash and Ray Fisher as Cyborg were brilliant, playing out their character arcs and adding different dimensions to the group. Jason Momoa’s Aquaman looks badass to say the least, and I’m looking forward to seeing the new three additions in their own films over the coming years, as this is only an evident building block and introduction for them. Amy Adams as Lois Lane keeps her usual, solid standard. The nemesis Steppenwolf, is portrayed through voicing and motion capture by Ciaran Hinds, and while his intentions are clear, you can see he is a stepping stone for things to come. Jeremy Irons as Alfred is still fantastic, excelling his performance in Batman v Superman which I thought was very good. The introduction of J. K. Simmons as Commissioner Jim Gordon is looking promising, and hopefully we see more of him in the upcoming solo Batman film we’ve been promised.

Unfortunately due to family circumstances, director and the man at the helm of the DCEU Zack Snyder had to step down back in March, with Joss Whedon, who was in charged of both Avenger films, taking over for the remainder of production, including some reshoots he wanted to do. As much as I enjoyed the film, you could tell that Joss Whedon influenced the nature of the movie. Now usually, DCEU films have darker tones to them. For Justice League, a funnier, lighter side came to the forefront. The evident wit and funny side, as much as I enjoyed it, was overplayed at parts, struggling to find the balance of humour and heart. I know what you’re thinking at this point; “DC films needed humour, why are you complaining when you receive it?” And you’re right, I did feel that sometimes, Man of Steel and Batman v Superman could have benefitted from a couple of extra gags, but not to the point where it takes over the film, and for most of Justice League, it did. That being said, the jokes are funny and innovative, playing to the characters and story wonderfully. However, the humour aspect at times took away from the serious nature of the plot. Despite some well timed lines in certain scenes, it’s dominant nature was unbalancing, and didn’t add anything other than slowing the intensity and action down. Elements of the DC rugged edge, realism and heart were there, but ultimately overshadowed.

I also feel like the reason the tone of the film was altered was due to its ‘rival’; the Marvel Cinematic Universe (MCU). The standard Kevin Feige and co. have set, has become the ultimate benchmark, producing success after success with movies such as Guardians of the Galaxy: Volumes 1 & 2, Captain America: The Winter Soldier and recently, Thor: Ragnarok. However, the DCEU is its own thing with its own identity, so why try and conform to be the same? It annoyed me a little because I like the tone and direction, to an extent, that these DC based films have offered. Another thing I couldn’t understand is the pressure from the studio, as they pushed for a shorter run time, 121 minutes, because of backlash from the previous films. If it allows the story to flow and adds value, then why cut it down? The Batman v Superman ultimate edition, at 3 hours long, is infinitely better than its theatrical cut (2 hours 30 minutes), because it links a lot of the story together, making it understandable and giving some of the characters their full plot.

What I do admire about the DCEU films, are their CGI work. The way they integrate everything makes you forget you are watching a movie, you feel it’s unfolding in the real world in front of your eyes. It’s seamless presence is divine, especially during fighting moments, where they look nothing short of spectacular. Best of all, The Flash’s speeding lightning bolts are perfect, and how they choreographed the sequences was amazing to see and a real drawing point of the film.

So, to my original question; does it deliver? Overall, it’s a yes from me. I enjoyed the film as a whole, and loved seeing all the fun interactions. However, an extended edition will be more than welcomed, and heading into future, it seems DC still need to learn some lessons of balancing and, at points, good storytelling. P.s. stay beyond the credits. Especially if you’re a fan of the DCEU, you won’t be disappointed.