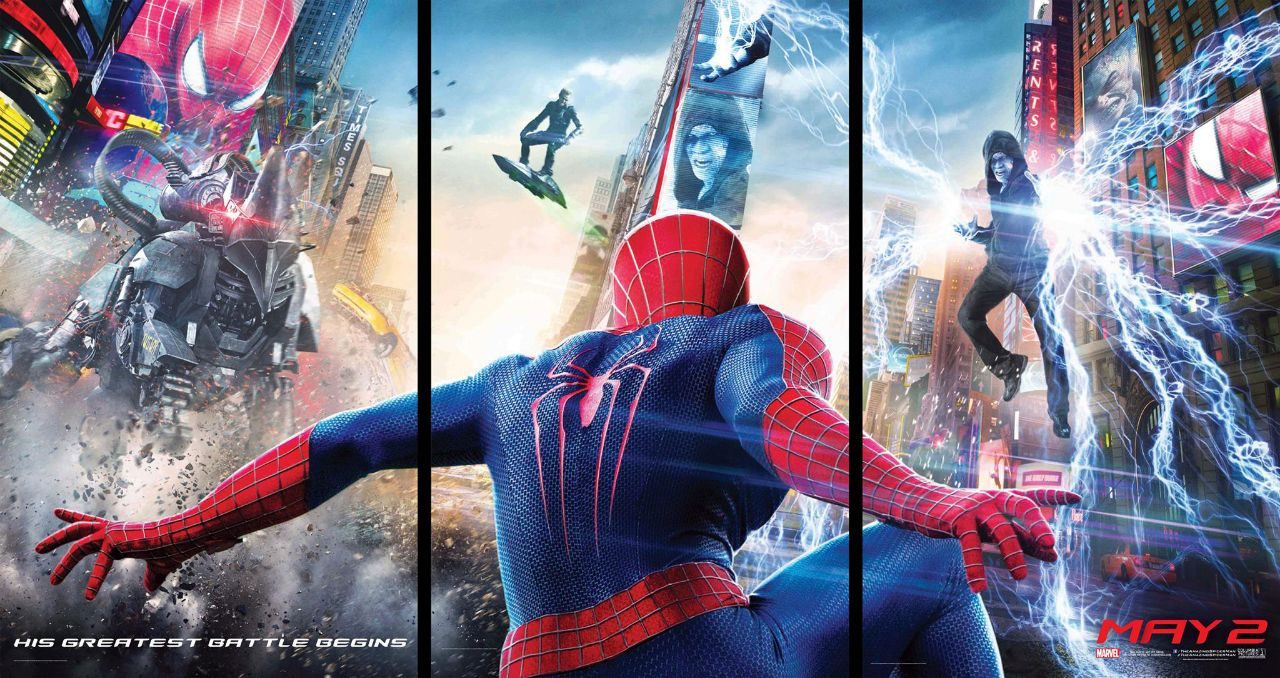 Marc Webb’s latest instalment in the Spiderman reboot’s franchise, The Amazing Spiderman 2, is ticking all the boxes of the Hollywood blockbuster but it’s in no way a superhero movie at its best.

Following on from the 2012 hit, Spidey 2 sees Andrew Garfield return as the spandex-wearing web-slinger and his normal guy counterpart, Peter Parker, burdened with great responsibility and haunted by visions of girlfriend, Gwen Stacey’s (Emma Stone), Dad who we last saw dying to save the hero.

In all honesty I cannot remember who or what the bad guy was in Garfield’s first outing as the popular comic book character. It wasn’t that I didn’t like it but I didn’t feel there was a need for the reboot so soon after Toby Maguire’s turn in the suit.

It was that feeling which stayed with me through at least the first half of Amazing Spiderman 2, with the movie unable to capture my attention long enough to stop thinking ‘Is there a point to this movie?’. It was a shame really, because whilst I still believe it’s too soon this wasn’t a bad movie. It wasn’t an amazing movie either – despite what the title reckons!

The plot returns to the mysterious death of Peter’s parents, Richard and Mary Parker, who left him with his Aunt May and Uncle Ben as a young boy, giving us an insight of what led Dr Parker to leave Oscorp and run away.

Though for a large chunk of the movie we are simply offered an insight into Peter’s hectic life – from saving New York’s citizens to trying to be on time to meet Gwen, interfering in police chases to trying to make some money from his photography. Its definitely important to see how being bitten by a spider has affected his life but it did seem to go on a little too long. Though I suppose you can’t blame the crew for wanting to show off the beautiful effects through their cheeky and confident hero.

Eventually we were introduced to the movies bad guy in the form of geeky and awkward Max Dillon (Jamie Foxx) who is slightly akin to Iron Man 3 baddie Aldrich Killian when we first meet him.

Max, who also works at Oscorp (who in this series doesn’t?), develops an obsession with our hero after being saved from him. Its an unhealthy obsession which coupled with him falling into a tank of genetically modified electric eels leaves him feeling a little blue. Now a science experiment gone wrong, as all Spiderman villains seem to be, Max – sorry, Electro, begins to wreak havoc on New York City finally providing us with the movie’s main plot point.

Electro is a pretty cool villain, there’s no denying that, and the effects used to turn Foxx into a blue sparkling creature from Hell are pretty cool too. However, his motivation for wanting to destroy Spiderman is pretty weak and his real anger at Oscorp is often forgotten except when it becomes useful for providing a final showdown location.

A Marvel movie wouldn’t be complete without yet another bad guy and test for its hero and what’s a Spiderman franchise without the Green Goblin and so enter Harry Osborn.

This time around the younger Osborn is played by Dean DeHaan who brings a much darker and sinister look to the character than the original series’ James Franco. DeHaan is a good Harry but his friendship with Peter in the movie feels forced and rushed in comparison to the established friendship of Sam Raimi’s movies.

Good fit for Harry or not, DeHaan’s performance hardly seems to matter because the introduction of Harrry and subsequently the Green Goblin is arguably the worst part of the movie.

Trailers and promotion for the blockbuster insinuated that a real focus would be Spidey’s enemies uniting – yet this is hardly relevant and it feels like Goblin is just there to set up for the next movie. There is, of course, nothing wrong with setting up the next movie – in fact its what works so well for the Marvel movies centering around the Avengers – but it just adds something to the end of a movie that could really have done without it.

In no way is The Amazing Spiderman 2 a bad movie. In fact its pretty enjoyable, fun, action-packed and you can easily see why its doing so well at the box office but for me at least, it is nothing to rave about, nothing on the first series and definitely nothing on what Disney are doing with the part of the Marvel Universe that they own.

Is it time for Sony to stop trying to cash in on the constant rise of the superhero popularity and sell the rights to Spiderman back to Disney’s Marvel? For me, yes.