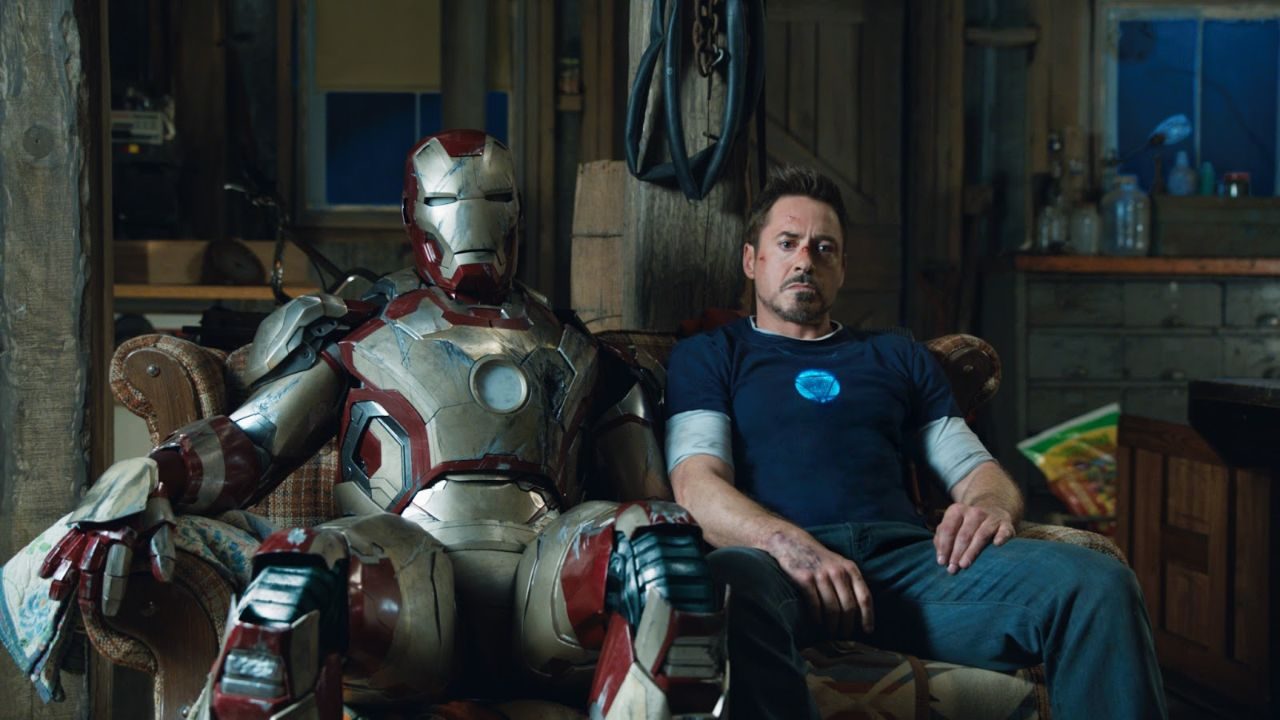 Fresh from stealing the spotlight in last summer’s blockbuster The Avengers, Tony Stark (Robert Downey Jr.) has returned for another bout in his Iron Man suit.

“Nothing’s been the same since New York” says Stark hauntedly setting the tone for the movie. Plagued by nightmares of his near-death experience in The Avengers, the billionaire superhero is not quite himself. It turns out that saving the world from an alien army led by a Nordic demi-god can have that effect on you. His panic attacks are getting worse, he can’t sleep and his relationship with Pepper is suffering.

Iron Man 3 sees a new director, Shane Black, take the helm (though Jon Favreau reprises his role as Stark’s bodyguard, Happy) who brings a new grittier feel to the franchise. Iron Man is known for Stark’s wisecracks and subtle but intelligent humour and so the best part about the darker film is how Black has been able to integrate it without losing any of the joking.

The film gives us a closer look at the rarely acknowledged past of the metal-clad playboy merging his past mistakes and his more recent attempts at leading a normal life into one epic final showdown.

This latest instalment sees the rise of comic book Iron Man’s arch nemesis; the Mandarin (Ben Kingsley). Depicted as a terrorist, the Mandarin’s quest for world domination sees him hacking into American TV with his Ten Rings terrorist messages which prelude attacks around the world and offer a reason for the destruction. He addresses America with the mannerisms of a stern teacher and a baptist preacher, very menacing and quite intelligent, he seems like more than a match for our Tony. Iron Man originally seems to have very little to do with this at the start but as the film moves on his involvement grows until it becomes his sole aim to stop The Mandarin. 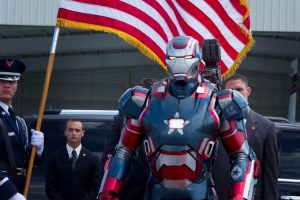 Whilst DC’s Batman is doing everything he can to keep his secret safe and his Batcave hidden, Tony Stark is giving his home address to terrorists on live TV. A brave but bad move that ends in Stark’s Malibu island home being completely destroyed by the Mandarin’s forces. Also in the explosion are his assistant turned CEO turned girlfriend and all of his Iron Man suits!

A malfunctioning JARVIS flies an unconscious Tony, in his latest Mark 47 suit, to Tennessee of all places. Poor JARVIS, he was only following his last command, ‘but sir, I made a flight plan!’ With his home in pieces and a criminal mastermind to take care of, Tony must drag his broken suit through the snow. He has lost what he clung so hard to in the aftermath of New York, stranded with no suit and no back up plan.

Iron Man 3 is very much about Tony Stark where the others focused more on building up the Iron Man character. Now that we know the man in the suit so well it is interesting to see him stripped of his technology and home comforts. It really gives us a new perspective on the usually over-cocky genius who finds himself having to put his trust in a 10-year-old boy called Harley (Ty Simpkins).

A lot of the film’s humour comes from Tony’s banter-filled relationship with Harley. And Trevor. Tony is the last man you would ask to look after a kid and so it is quite touching, and refreshing, to see Tony meet his match in a 10-year-old boy.

Whilst Tony is off rediscovering himself, and rebuilding Mark 47, a super sleazy Guy Pearce is busy getting close to Pepper. Aldrich Killian who originally was shunned by Tony at New Year’s 1999 in Switzerland, is now a tour de force in the gene manipulation field with his company A.I.M. Thirteen years later, he has truly come out of his shell and with the help of a team of scientists, one who happens to be an ex-flame of Tony’s, he has created Extremis.

Extremis is revealing the potential of the human race, participants are stronger, faster and can heal at a ridiculous rate but not everyone can take to it. It is seen as almost a drug with subjects having to ‘regulate’ but what happens if they can’t? Has The Mandarin somehow got hold of this research? Why are there no bomb casings found at his terrorist attack sites?

Overall, a job well done. It is quite long, with a running time of 130 minutes, it is the longest film in the Iron Man trilogy but it doesn’t go soft in the middle and it won’t let you relax for a second. Robert Downey Jr. is as fantastic as ever, reminding us that no one could be Iron Man but him, he added more depth to Tony this time as his character goes through a rollercoaster of emotions and he bends subtly around the fast paced dialogue like a pro.

Gwyneth Paltrow’s Pepper physically smoldered in some scenes but that was rare, to me she seemed to become more and more annoying. She is the CEO of Stark Enterprises so I wouldn’t expect her to be such a victim. Eventually she does pull her finger out but its not of her own free will.

A shout out to Paul Bettany as JARVIS, who has some of the best lines in the film, ‘As always, a pleasure watching you work, sir.’ For artificial intelligence JARVIS has got sarcasm down to the ground. I actually got upset when he malfunctioned, ‘I think I’m going to sleep now, sir.’ Bless him.

Newcomers Guy Pearce and Ben Kingsley were excellent. They get the feel of the Marvel villain perfectly, I even felt that Aldrich Killian was justified in his revenge for a second or two. Extremis has made him superhuman and he wears it well, not many people can pull off breathing fire. The Mandarin is full of theatrics something that Ben Kingsley obviously relished. His over the top portrayal of the epitome of the Western terrorist ideal is delightful to watch. Many of the comic book fans will be disappointed that this Mandarin is not exactly what was expected but he works well as he is.

One unusual part of this film is that it is inexplicably set around Christmas time, there’s the songs, the gifts, watch out for a very large rabbit and even a Christmas dinner at the Vice President’s house. I’m not sure whether they ran behind or finished really quickly but it is odd to have a film that comes out in Spring set at the end of December. You can’t explain that.

The ending has a finality to it that hints at this being the last Iron Man outing for a while. We look forward to his return in the second Avengers due out in 2015. A very action-packed and thrilling ride, bring on phase two of the Marvel Universe take over. As always the post credit clip is worth a look, this time a drowsy Bruce Banner turns up, continuing the bromance that Iron Man and the Hulk started when they assembled.