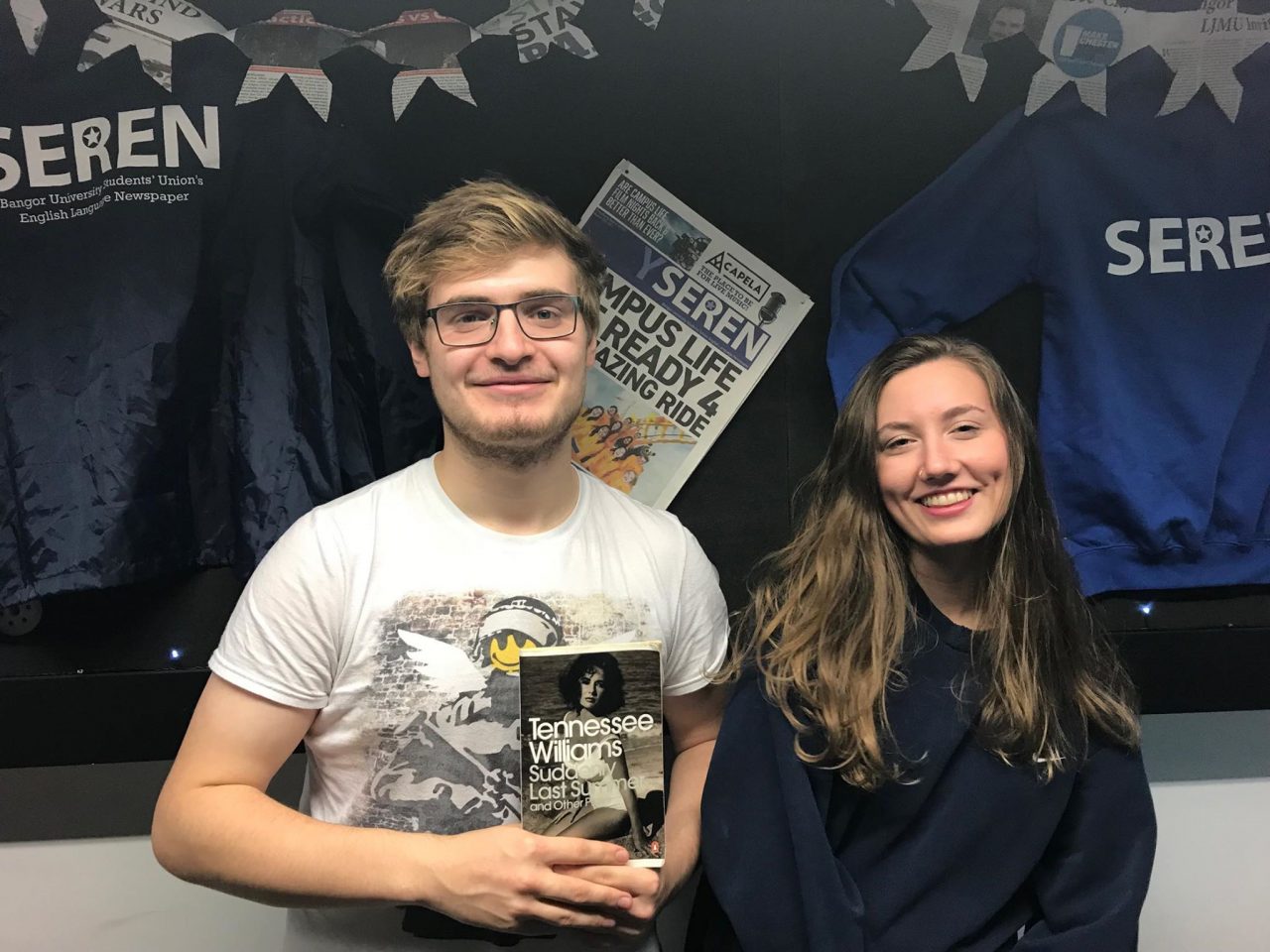 Every so often, there are some student projects which find their way on the big stage: one of these is Suddenly Last Summer, a Tennesse Williams play directed by Alma Nordstrand and Peter Jones, two members of the Bangor English Dramatics Society (BEDS), in Pontio on the 13th and the 14th of November.

What made you become BEDS members?

Alma: I was looking for a drama society in particular. I joined after I saw BEDS at Serendipity. I liked the atmosphere, it was a really communal sort of feeling. The first semester, I was really inactive, and then I did publicity for Bloods Thicker (by Hannah Grimston) last semester. I really enjoy the environment and the company.
Peter: I found them at Serendipity and then went to auditions, got a part in the Crucible (dir. Nadine Kaur). It was a fun production. The thing that sold me on BEDS was that it’s not super professional, but more like “you get the work done”. You’d have jokes and stuff, but they want to make good shows, and that’s what we want to do at the end of the day.

What made you choose to become directors?

Alma: I had a lot of different plays in my head that are like “this would make a really nice show”. We read Suddenly Last Summer in the Gothic Literature module, and I really loved that play. I don’t like seeing myself as an actress, but I would love to pitch the play, I would love to take my vision of the play onto the stage.
Peter: I got onto it because she was reading it. She was talking about pitching it, and even though I was studying it too, I never read it! It did interest me. I started imagining what she was imagining, so we started brainstorming together.
Alma: We started reading it together and performing it to each other. We got a grasp of it, and we started developing the characters and then we wanted to make a show.
Peter: I signed on. I wanted to get into directing. I thought I would get to direct in Film society, but I’ve got it here, and it’s been really educational.
Alma: It’s super rewarding, actually. Way more rewarding than I would have expected it to be. I feel like we haven’t been doing it for ages.

Suddenly Last Summer; can you explain what the play is about?

Alma: It’s a play about old aristocracy and loss; it’s sort of a bizarre piece; an old lady and her niece who travel abroad with the lady’s son and who died during the holiday but nobody really knows what happened and nobody really wants to believe the story that the niece is telling.
Peter: It’s about reliving the past; how the past affects the present, the things that happen in the past come back eventually and the urge to push it away.
Alma: It’s a lot about repression.
Peter: Yeah! And there’s a lot of different ways that it is about repression.
Alma: Repression is a big theme because the lady is trying to repress the bad reputation of her son but also repress her own mourning. The character Sebastian is repressing his homosexual sexuality, which makes him a very negative being.

How is this production being adapted for Pontio’s Theatr Bryn Terfel?

Alma: It’s a bit tricky. There is a lot of work. Our rehearsal spaces are so much smaller than the actual stage we will be on.
Peter: We’re lucky we get access to JP Theatre, and that helps us.
Alma: There is a lot to think about, too.
Peter: With the actors, we’re seeing consistent improvement in every rehearsal. We love being surprised during rehearsals.
Alma: We have amazing actors. It’s every encouraging seeing that the cast are really excited about the production as well and that everybody is absolutely in for it.
Peter: There have been rehearsals where we have wanted to stop, and the actors were going “can we keep going a bit?”, and we were “Yeah! We’ll keep going!”.

Any favourite moments during rehearsals?

Peter: The actors all shine in different moments, and of course there are moments when they need to develop.
Alma: One of my favourite bits is the dynamic between actors in Scene 3 is just wonderful, it’s such a pleasure to watch it happen.

What elements do you think will catch the audience?

Alma: I think it’s an escapist play, in a way. It is quite dreamlike, and the things that have happened aren’t really realistic, but it’s also the way Tennessee Williams writes. He has a very poetic flair that contributes to the escapism.
Peter: Even with the opening, Tennessee is really specific about where it’s set, what the audience see. It’s all about seeing this other world, and then in this other world, the characters talk about another world!
Alma: There’s so much allowance for creative freedom. You can make it so eye-catching.
Peter: We can create a really immersive experience for the audience, that they almost forget they are even watching. They are there in Louisiana with Doctor Sugar. That’s the big hope that we can get to that.

What would you say to students who would undertake big projects such as this?

Alma: My first tip is to organise everything. Everything you do has to be planned. We have been working pretty much all the summer since the night after I’ve pitched it.
I think even though it’s stressful, you need to stay calm.
Peter: You get stressed and you can have a little bit of an argument, and it doesn’t help in any way. Have a calm state of mind. If you plan it right, then you have all the time to do the work.
Alma: It’s great that we’re doing it together, that we can brainstorm ideas.
Peter: We check each other on ideas. You’ve got more vision, I just sort of shape what we do.
Alma: We are good at different things, we are more interested in different aspects. Peter can focus on the acting, and I can focus on the aesthetic bits.
Peter: She’s doing costume design, she organises the rehearsals, sends the twice-a-weekly reminder.
Alma: I would say you’re more practical.
Peter: You’re more of the big picture, and I’m the nit picker. The great thing I find with directing is articulating.
Alma: If you want to put on a show. You’ve got to know the script even if you’re not the actor. You have to be able to tell your actors what’s actually happening with their characters. It’s especially difficult in the beginning when the actors don’t know their characters yet. You need to know what you’re putting on so your actors can know too.