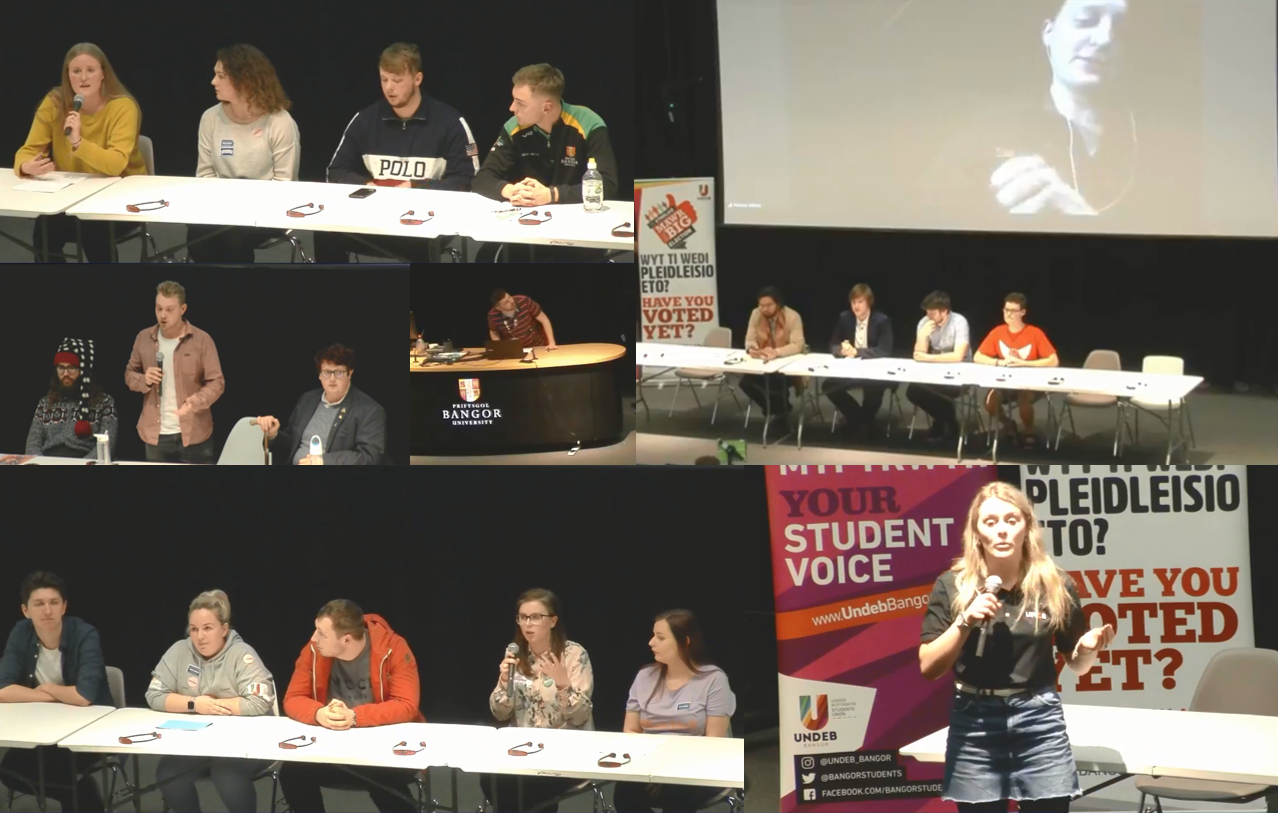 The officers have now been elected, but how did they and their competitors fare before live audience scrutiny last week?

The format begins with a quick two minute introduction from each candidate, followed by quicker answers to general questions. Osian Williams, Fred Walters, Rhiannon Williams, James Martin and Muhammed Firdaus, at that point all mid campaign, each gave very competent introductions of their own credentials as candidates, before launching into the identification of the issues they would hope to make improvements on if elected to office. Despite the truly impressive performance by all five candidates (most noticeably Rhiannon, who held a remarkable command of the room even though her face was being beamed across from India onto the huge projector screen behind the table), the debate became a duel for the VP position in a more-or-less two horse race between Muhammad’s Cicerian rhetoric and Fred’s systematic and comprehensive manner. Muhammed’s experience as the current VP of Socs and Vol definitely gave him an advantage over the others in terms of his knowledge of the current requirements and capabilities of the role, but nonetheless, Fred knew his stuff, and communicated them with a German efficiency that he also identified himself.

There was a particularly good moment, during a question concerning the efficiency of the candidates, that saw James only use ten seconds of his limited thirty, stating confidently that he was “no time waster.”

After a very short pause, the hopefuls for VP Sport took the bench. Bethany Kiamil, Henry Williams, Maire Douglas and Hayden Saville; this time, none of them were digitally reconstructed. The debate took the same format as previously, all proving their aptitude through experience. There was a lot of talk of the “student experience” and not much identification of its components but all four had clearly thought out the aspects of the current sporting situation.

It seemed as though Bethany’s understanding of the needs of students involved in specific sports clubs was all-inclusive and shone a little more than the others, but she was not as compelling as Henry, who was quite calm (though all four were very charismatic, really).

The rounds were concluded, the contenders left the podium, and in that brief hiatus – before the next series of rapid-fire questions could find their targets – half the audience left.

And so, in a silence that was quieter than before, up walked Harry Riley, Emma Horan, Corie Shorrock, Paige Dixon and Gabby Radzevicuite. Once again, the introductions set off.

It is a pity that the proceedings were proposed as a civilised and individual exploration of each candidate, and not a lawless debate, because that would have a fantastic sight – all five candidates gave impassioned speeches. Corie’s focus was on his credentials as an ordinary person, Emma focused a lot on the need for gender neutral bathrooms (amongst other things, though this stood out the most), but it was Gabby, despite her rather more timid nature, who seemed to have considered what issues were relevant to students with the most clarity – one of her standing ideas was to space out the exam time table to the increase the amount of possible time between exams, so that no student would have two in a single day. This I thought a step out of the box, but her delivery of this and other answers to question was less persuasive, especially next to Paige, who (perhaps due to her curled North American accent) was sat back with a lot more confidence. I do not think there was a single, definitively more prominent candidate – though I had by that point decided who I would vote for.

In Welsh, next, Lleucu Myrddin took the stage. As she was the only UMCB candidate (Undeb Myfyrwyr Cymraeg Bangor or Union of Welsh Students for Bangor), Lleucu stood, instead of sitting at the formal desk of questioning. The entirety of her time on the stage was conducted in Welsh, whilst, for monolinguals, translations were being muttered through headphones in a warm voice. She seemed calm and confident up there and had a good rapport with Gethin, the current UMCB President, who was conducting the proceedings. She left the stage to applause and must have been feeling confident about her chances considering her opponents’ non-existence.

Finally, though, it was time for the candidate hopefuls for President: Mark Barrow, Joshua Bebbington and Gax Liz Person. The stage was set, the room went silent, and Gax sang a song that demanded audience participation.

Joshua’s manifesto points were fairly well thought out, but he suffered from really rather bad nerves up on stage, which put him at a definitive disadvantage next to Mark, whose stage presence is truly astounding. The contest was won in those first few seconds, I think, and mostly because of Mark’s ability as a public speaker. Gax was totally crazy, but when all three were asked about what they considered to be the biggest problem facing students today, Gax calmed stated “apathy” and launched into a wild criticism of the indifference most students (using the earlier swathe of departure as a concrete example) have for their own ability to improve their experience here at Bangor – something that I agreed with.

The proceedings as a whole were long and exhausting, but incredibly enlightening. It is my opinion that performance of the candidates during questions was what solidified their success. Maybe four hundred people were present at the start (before the great routing) and more still were watching the streaming on the Seren Facebook page.

The benefits of exposure can only take you so far, and events like this are what really highlights candidates’ abilities and failings.

Congratulations to all of the newly nominated members of the Sabbatical team.