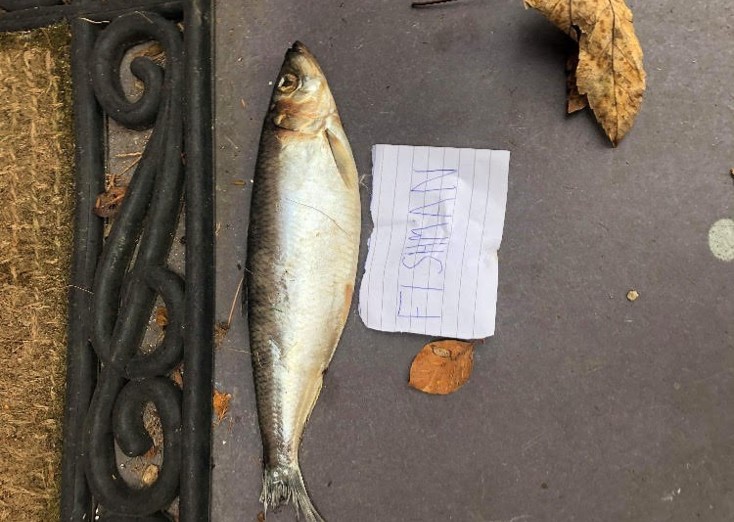 Fact or fiction? Mere pranking, or genuine harassment coming to our streets?

These are some of the questions the student population of Bangor are asking themselves following the revelation of a mysterious figure known only as the ‘Fishman’.

Whether or not the Fishman is an elaborate student prank, or someone who genuinely feels that there is “a serious lack of Omega 3” in our diets as stated in an alleged post by the Fishman on the popular student confession site ‘Bangfess III’, over the past week reports have been coming from all over the town with stories of fish being posted through letterboxes or left on doorsteps for people to find. In many cases the fish will either have the one word ‘FISHMAN’ written on them directly, or left in an accompanying note.

Although in his previously mentioned statement, the Fishman claimed that they operated solely in the Upper Bangor region of town, there have been a number of anonymous posts claiming that they have had fish through their doors in in the Lower part as well, suggesting either a step up in the operation, or that there is more than one participant, or maybe they have even managed to inspire copycat artists.

Furthermore, a number of people have got in touch with reports of their encounters with the Fishman or the produce that he or she leaves in their wake.

Miss Courtney McHugh stated that she “came home to it (the fish)” at around 10:30pm but that she “didn’t see the guy”.

This account of the figure’s stealthy nature is mirrored by the account of Mr Daniel Smart of Snowdon View who claims that “something woke me up at like 5am” and that “it might have been the fish”.

Although Mr Smart is unaware if that night time disturbance was caused by the Fishman, the fact that the fish pictured below was found in his letterbox is strong evidence to suggest that he did have a late-night visitor. Another thing both of these stories have in common is that they were not the only people on their respective streets who received a fish at the same time.

In Courtney’s case, “a lot of them were put on our road a lot earlier”, and one of Daniel’s neighbours (a Marine Biology student) found a fish of his own, which he identified as a mackerel.

What the motivations of the person or people involved in the recent fish-based phenomena are, we do not know, but what we do know is that they have captured the imagination of many.

Unless any more evidence comes to light, there doesn’t seem to be any forthcoming malicious intent, and we will wait and see with bated breath to see how the situation develops in the future. 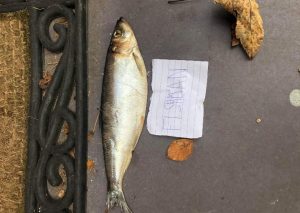 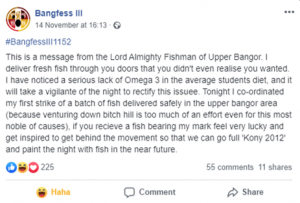