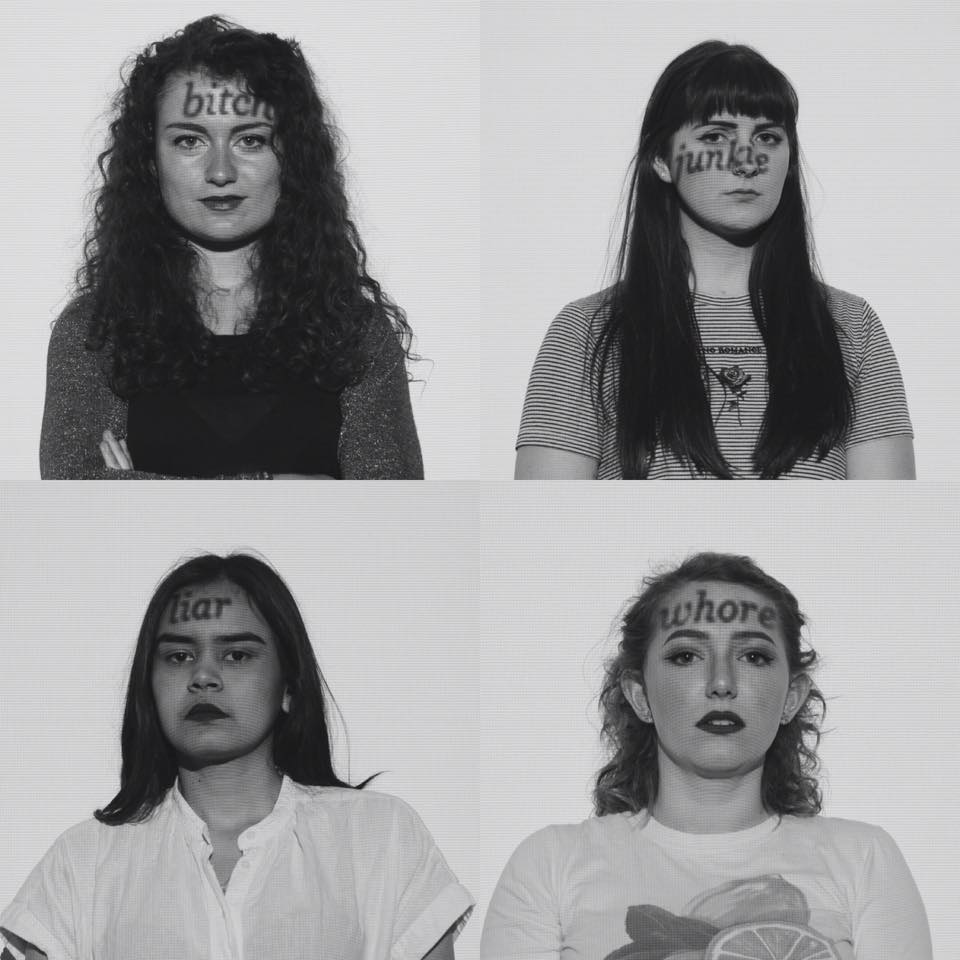 “There’s no keys to hold between her fingers. There’s no friend to call to make sure you get home alright. There’s no silenced headphones or self defence classes. We are at his mercy, weakened by lack of food, sleep and sunlight. We are the wilted flowers, the gardener’s hand lingers above ready to pull us from the ground.”

In the exact centre of the worst nightmare of anyone who’s walked a dark street alone with a hundred Netflix serial killer shows spinning in their head, or a hundred Disney princesses snatched away and locked in towers – or with whispers of a classmate hurt by a horrible boyfriend ringing in their memory – is the world of They Will Be Like Shadows.

A room, deep underground, where brilliant girls are locked away, where nobody comes looking for them. When the lamp flickers out, it’s pitch black. Five kidnapped women have each other for company for the rest of their days, but having each other for company isn’t easy either. Pages of storybooks litter the floor, manic drawings are pinned to the walls. Their smiling, almost kindly kidnapper, Aaron, pops in with gifts of stationary for them to write down their dreams.

With its hospital gowns, fairytale allusions and fragile masculinity, They Will Be Like Shadows, is, admittedly, zeitgeisty as hell. But a zeitgeist is there for a reason, and writer Hannah Grimston has tapped into those exact reasons, she’s tapped fifty feet deep into them. Each woman in the bunker is brilliant and creative, she is also scared, lost, in pain and finds it hard to make friends, but her brilliance is the thing that still defines her. This play is visceral and mesmeric, it is tense and teary, it is the best theatre performance Bangor University students have ever put on: Grimston – and BEDS – have nailed it.

The audience sits in a semi circle with a sparse basement set on stage, and in the second act there is a desk and bed on the floor in the middle of the semi circle, and performers walk about behind the crowd, bringing the drama even closer. The usual dingy, moth-eaten sofas of student productions gain a new menace in the bare, tepid lighting of Aaron’s basement, and the white medical costumes leave the characters looking unnervingly vulnerable. The story is not just told through conventional dramatic dialogue, but by choreographed dance sequences and fluid flashbacks, as each woman tells her own story. These are set to stompy, snarling dark indie tracks that blare at the audience with each beat synchronised perfectly to some jarring writhe of the cast’s bodies, at one not just with the music, but with each other. It is this physical theatre that first grabs the viewer’s attention; despite clearly being so polished and fine-tuned it is also so raw; the choreography always rooted in guttural emotion rather than superficial stage-school elegance.

As well as writing the script, Grimston co-directs the show with Harry Peaker, with Lewis Dixon as the lead technician, and there is a clear unity of vision that keeps the whole performance tonally consistent but stuffed with absorbing detail. The individual performers are also allowed to shine through the intricate web, and each character is easy to emotionally invest in. It was said in Society circles that November’s Suddenly Last Summer had the best cast of any recent student play, but that accolade could swiftly be taken now by the actors of They Will Be Like Shadows.

Anna Monnerau is perfect as arch-manipulator Adeline, who has been down there the longest and gone native: whispering in Aaron’s ear and, as is gradually revealed, driving him on to continue his abuse of the others, while she remains his teacher’s pet. Dressed differently from the other women, in her long thin strappy black gown with bold brown curls and bold red lips, Monnerau looks halfway between a post-piss-up Amy Winehouse and a post-shag Death Eater. She smoulders and mock-grieves with deft subtlety and a disconcerting calm. Monnerau’s flame-flicker stage presence gives Adeline an enigmatic beauty and danger that draws the viewer deeper and deeper, up to her final shocking inversion of the relationship between kidnapper and victim.

Her chemistry with Peter Jones as Aaron is similarly absorbing, and Jones convinces totally as a weak, loving abuser who dotes on his ‘dolls’ one minute and, raging, lays down the law the next. One of the most menacing lines in the play – and a classic bit of Grimston irony – is when he gives one woman a novel as a present, telling her – in complete earnestness – “The main characters is a strong woman, just like you.” The climax of Aaron and Adeline’s relationship, increasingly unhealthy on so many levels, is the most powerful scene in the play. Jones is an actor who holds nothing back, and his wild, bawling unravelling, as he sinks to the floor, murmuring a disparate and dizzy monologue under his breath, is enough to make some members of the audience tear up in sympathy for the man they’ve been told to hate, and hold their breath in shock as they await what he will do next.

The play is grounded by four equally solid performances from the rest of the cast. The most vocal protests against Aaron’s regime come from Lucy Goodwin’s Ava, who initially seems the closest to ‘normal’ out of any of the characters. Smart, unyielding and cynical, it slowly emerges that her resolution to keep it together is making her fall further and further apart, and Goodwin does a tremendous job of existing in the constant state of numb, still fury that drives her character. She can seem angry as hell without raising her voice.

The locked-horns enmity of Ava and Adeline’s confrontations is contrasted well by the quieter, more sympathetic April, played by Cynthia Clara Devi. In a silk dressing gown, often slowly writing in her notebook, April is introverted and self-reliant: a state brilliantly explained as her backstory emerges. And she arguably gets the best backstory of the lot, having tirelessly sacrificed herself for the happiness of others, only to be rewarded with more pain and labour, and harassment from Aaron. Cynthia Clara Devi’s performance is expertly judged: subtle and focussed yet still quietly burning with raw hurt. Grimston picks out this character to need urgent medical attention in a sudden twist, and Aaron’s attempts to nurse and comfort April as she gradually corrects his naïve assumptions about her working class upbringing make another standout scene in the play.

Often the physical storytelling gives just as powerful an insight into the characters, as is the case with Jess Simms’ Agyness. One particularly stomach-twisting sequence shows her asleep in the bunker’s grotty bed as she comes down off a massive illegal high. The mad, sweating withdrawal clawing at her alone in the dark, writhing and moaning, is depicted by more jarring dancing from the others, jumping on and around her. Simms’ dramatic acting is also very visceral, from her first line, hunched over in the middle of a circle of prisoners, “Don’t fucking look at me!” Agyness is a character given artistic license to fully scream and wail, with alarming effect.

But perhaps the most haunting creation of They Will Be Like Shadows is Jenny Bray as Amber. In little pigtails with a befriending smile and an undiminished love of bloodthirsty novels, Amber may be the most visibly afraid and shaken, but there is a tentative hope and love for others that shines through the fear. Bray proves herself be a phenomenal actor, handling many huge monologues with a breathy, acute naturalness, and responding delicately to the other actors around her. She frequently has to run the full gauntlet of emotions from one scene to the next, but she is fully capable of doing so. The impact of each of Grimston’s sentences is doubled by Bray’s delivery.

The writing is such that every word matters, and every line is balanced for its aural poetry. The poeticism of the speech is so ubiquitous that it does perhaps feel, here and there, a bit too eloquent and silky to belong in the mouths of all six characters, but there is something extradiegetic in each monologue that allows the play to basically get away with it. What the audience may find it harder to get a hold on is the story’s ending, which comes together very quickly compared to the rest of the narrative. The exact details are flown through, but the emotions still hit hard, and the desired effect reverberates to the last moments. The curtains close on the world of They Will Be Like Shadows with the heart of each audience member still racing.

This play enjoys a position at the heart of a very rich visual arts scene at Bangor University, but its achievements excel beyond the usual ‘Get your four quid’s worth’ of the Uni’s student productions. In many ways, it feels like the coming together of so many faculties: the Theatre and Performance course’s more avant-garde workshop practices, the technical creativity of the drama societies, and an appreciative study of the Angela Carters and Christina Rossettis of English Literature (the play’s constant references to texts on the National Curriculum evidence that). It shows Bangor at its very best, and it is also built on a fundamentally great story idea that could succeed in any format from a thematic poetry collection to a binge-able TV series. It is a show that would play well at any fringe festival, and it can only be hoped that Grimston et al realise what they have with this script, and where it could go from here. It isn’t just another production week to now be wheeled off into the shadows.