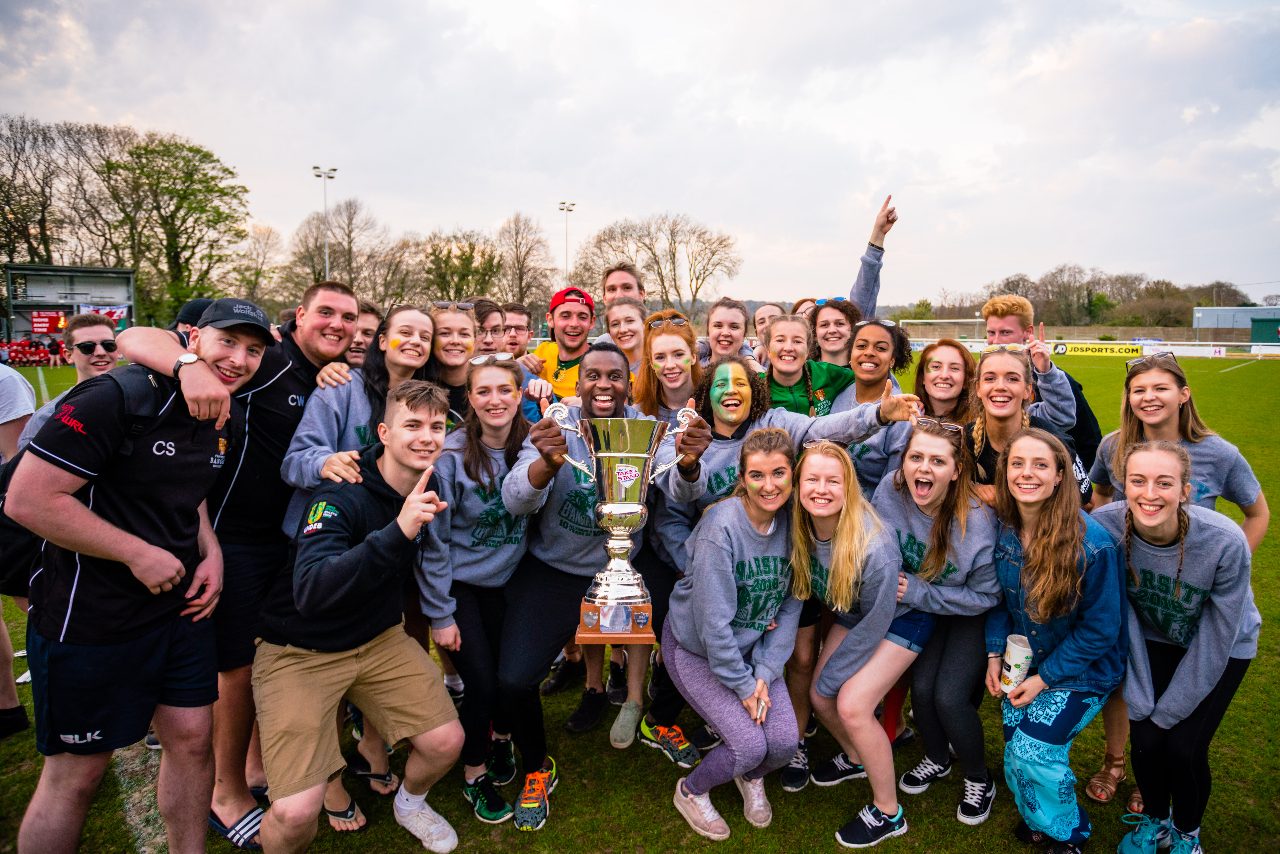 Once again, Bangor University win Varsity in momentous fashion, lifting the illustrious trophy for the fourth year running – a landmark in the competition between the two Universities.

The final overall score was a resounding 33-10 to Bangor, leaving Aberystwyth University in the dust.

Tatenda Shonhiwa, Bangor’s VP for Sport, said: “This year has been an enormous year for Bangor’s students. We should all be proud of what we have achieved as an AU as well as what we have done as our individual clubs.”

He added: “Today we delivered yet another massive win against our friends from Mid-Wales Aberystwyth, winning 33-10. This was one of our finest performances yet.

“Thanks to the facilities staff at each of our venues for such excellent playing conditions and to Bar Uno for sponsoring the event.

“I’d like to congratulate all of our teams and their squads – whether they played today or supported their teammates during their fixtures – as you have done yourselves, your Clubs, Undeb Bangor and Bangor University proud.

“I would like to thank my Undeb Bangor Team and Bangor University Sport partners for such a fantastic day as well as St Johns, Storm, Seren and all of the volunteers that made this event a success.”

Bangor went into Varsity 4-2 ahead courtesy of Ultimate Frisbee, Surf, Golf and Women’s Cricket, who all played their events on Wednesday 18th of April.

However, victory was far from confirmed. 36 other sports were to be contested on the main day of Varsity 2018.

Countless Bangor successes became the story of the day, with wins pouring in from early afternoon. By midday, Bangor already found themselves 9-2 in the lead.

Notable triumphs include Bangor MudDogs’ 41-13 thrashing at the Treborth playing fields, Badmintons comfortable 8-0 in Canolfan Brailsford, and Swimming’s 28-3 at the Pool.

Aber saw some success in the form of Womens Hockey. However, Aber’s Mens Hockey failed to even pitch a team and forfeited the game – almost a metaphor for their limp performance at this year’s competition.

By 3PM, Bangor had been defeated only 5 times, amassing 20 victories against our Aber counterparts. By this point, the superb athletes in Green and Gold were within touching distance of the Varsity trophy.

With two hours to spare before the Men’s Football Finalé, Bangor had already won Varsity 2018, breezing towards the target of 22 points.

Nevertheless, the highly anticipated Men’s Football was still a competitive affair, with Aber taking the lead in the second half.

Despite Aber’s Extra Time winner in the form of an own goal, Bangor were to have the last laugh, lifting the coveted Varsity trophy in front of their home following at Bangor City’s VSM Stadium.

See you next year Aber – #4thewin!

Full coverage of Varsity including a full score breakdown can be found here: https://seren.bangor.ac.uk/varsity2018/