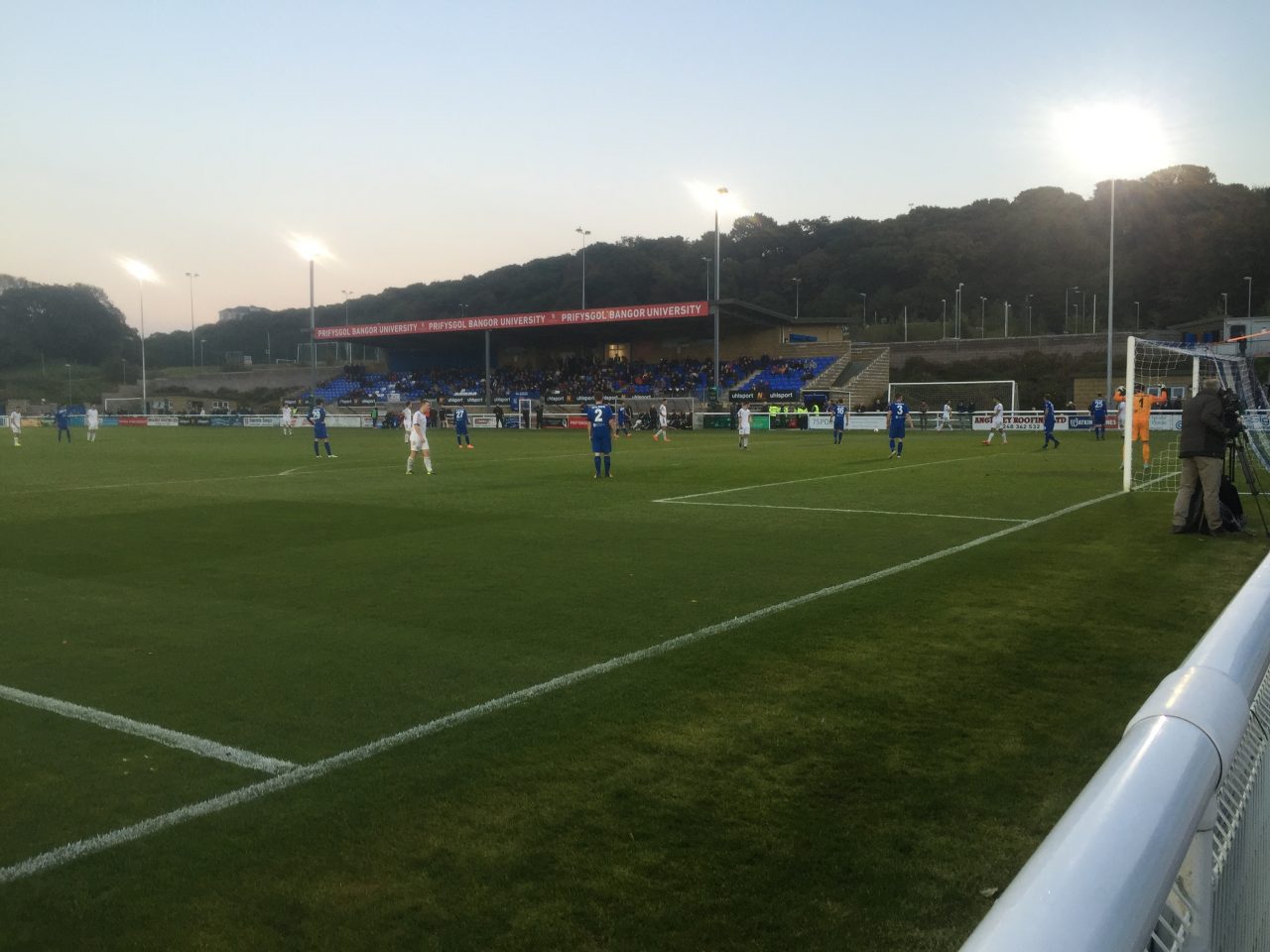 Derby-day delight: Bangor City come back in the second half to beat Rhyl 3-2

Henry Jones completed a wonderful second half comeback against local rivals Rhyl FC, strengthening the Citizens’ third place position in the Welsh Premier Division. Having controlled vast periods of the game, it was a well-deserved three points for the blues, pleasing manager Andy Legg and the fans in attendance.

Before the game started, both teams, officials and spectators held a minute’s silence to remember the disaster at Aberfan in which 144 people tragically lost their lives. In addition, 5 minutes into the match, both sets of fans joined in a minute’s applause to remember Bangor City fan Kevin Pritchard and Rhyl legend Selwyn Morris who unfortunately passed away recently.

The game started with Bangor dominating most of the possession and having a few early chances including H. Jones smashing the post before a few challenges began to creep in – typical of a derby-day match up. Bangor continued to press, finding plenty of space and using plenty of width, only to see the offside flag and some resilient Rhyl defending damper their rewards. 35 minutes into the first half, a freekick for Rhyl’s Kristen Pierce was deflected in to give the visitors a goal advantage towards the break. The lead was doubled soon after with some exchanges in and around the box before Ahmadi found the ball at his feet and clinically finished. Bangor continued to dominate possession heading into halftime but couldn’t grab a goal back before halftime. Rhyl went into the interval with a two-goal lead, with Simpson picking up a booking. A halftime substitute for the visitors saw Buckley depart for Lamb.

Bangor started the second half exactly like the first, pressing and winning the first and second ball from Rhyl clearances. Rodrigo Branco saw a long-range lob tipped over the bar by Evans but moments later he was played in behind the visitors back line to dink it over the keeper to ignite the comeback. The Citizens only substitute saw Christian Lagos replace Laurence Wilson, who made an immediate impact after coming on. A blistering burst of pace saw Lagos cut inside from the right-hand side, causing Simpson to bring him down and pick up his second booking, leaving Rhyl with 10 men for the remainder of the second half remaining. Some good exchanges of short passing around the area created chances and Bangor’s possession and patience was rewarded with an equaliser. Dan Nardiello brought down the ball with an acute touch, turned and slotted the ball home to keep the momentum with the home side and make the score 2-2. Despite going down to ten men, Rhyl were still finding ways forward to create opportunities but they came to no avail. Turning defence into attack, Bangor were becoming stronger and stronger, stretching the visitor’s midfield and back four by switching play with ease, allowing Lagos to use his pace. The winner came 20 minutes before the end, with a cross to the back post being met by Henry Jones who headed the ball back across goal, beating Evans. A much-deserved reward for Jones who was outstanding all evening, moving the ball fluently from midfield and creating several opportunities for the blues. Rhyl manager Neil McGuiness was sent to the stands shortly after the Bangor winner, much to the delight of the home supporters.

The Citizens managed the remainder of the game to near perfection. They stuck to their game plan, switching the play from flank to flank and Lagos, Shaw and H. Jones had continued success cutting inside or finding crosses. This opened the midfield area, allowing Bangor’s back four to play out and keep the game under control as opposed to kicking long. A few tired challenges saw some late bookings and the pace slow at times, working to the advantage of the home side. Bangor created a few half chances to put the game out of reach for Rhyl but couldn’t find the back of the net.

Despite their remaining substitutes entering the fray, a late push of bodies forward and a free kick for Rhyl in injury time, Bangor claimed the derby-day victory to ensure all three points and stay third in the table, six points above fourth place Bala Town after 12 games. This will give the team confidence heading into another important home game against The New Saints in the quarter-finals of the Nathaniel MG Cup. The way they performed showed a real maturity. They made the extra man count, and ensured they didn’t lose focus during the final stages when it mattered to close out the game. For the majority of the game, the back four were solid in their organisation and defended long balls well, allowing the midfield to regain possession and orchestrate the play, feeding the front men on numerous occasions. All positives heading into Tuesday.