A Comeback to Remember for Bangor City FC 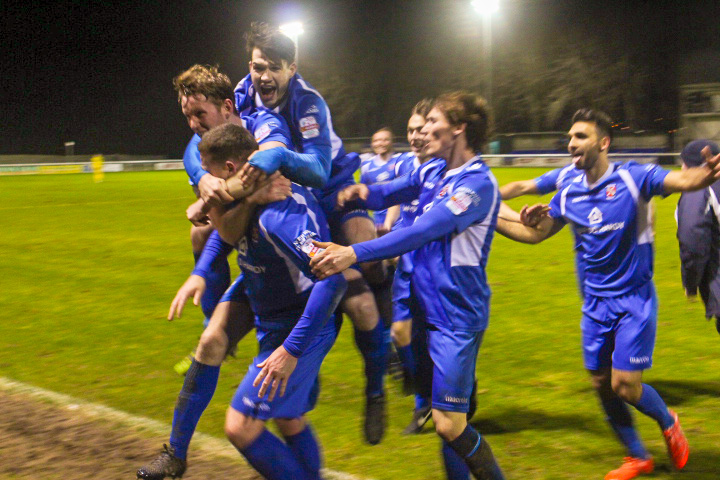 29 January 2016 – Bangor University Stadium
Despite a very disappointing start to the new year when Bangor suffered a 0-3 home defeat to North Wales rivals Llandudno on new year’s day, Bangor have redeemed themselves with a very impressive run of form since then by being undefeated. They looked to continue this run when they welcomed another Northern Welsh team, Rhyl, to their ground. Bangor had previously played Rhyl twice this season and remained undefeated in both with a 1-1 draw on the very first day of the season and 1-0 home victory back in October.

The first chance of the game came to Rhyl’s Corey Williams who after a mix up in the Bangor defence ran straight through on goal leading to a brilliant diving save from Bangor goalkeeper Connor Roberts who collected the ball comfortably.

Near the 30 minute mark, Rhyl swung the ball into the Bangor penalty area which led to chaos in the Bangor defence as the ball hit off Bangor’s captain Leon Clowes’ foot and went into to his own net to put Rhyl into a 0-1 led.

Minutes later, Rhyl’s Levi Makin had a chance to put his side further into the lead with a magnificent strike from outside the penalty area which was equally matched by the save from Connor Roberts.

Just before the end of the first half, Bangor had their first real noteworthy chance of the game when they were rewarded with a free kick in a promising position. The ball sailed over Rhyl’s defensive wall but was pushed away strongly by Rhyl’s goalkeeper Terry McCormick.

The first half came to an end with Rhyl one goal in head. Bangor certainly looked up to scoring but they weren’t making the most of their chances. All in all, it was a rather dull half, but nothing prepared us for what we were about to see.

The second half began with a bang. From a counter attack, Bangor found themselves three on three when a shot from Bangor’s Chris Jones was punched away from Terry McCormick, only for the ball to fall to the feet of Steve Lewis who controlled the ball well and fired it into the back of the net, giving Terry McCormick and his defenders no chance.

Rhyl responded quickly and effectively as they attacked straight from their kick off, as David Mannix played an outstanding cross to Stephen Wright who nodded the ball home and left Bangor’s Connor Roberts stranded as all he could do was watch the ball dip into the back of his net, making it 1-2 to Rhyl.

Soon afterwards in this end to end match, Bangor played some clever football to get inside the opposition’s box when the ball found Damien Allen who unleashed a shot from 20 yards out which Terry McCormick saved, but to his misfortune, the ball fell at the feet of Bangor substitute Porya Ahmadi who comfortably slotted the ball home to make the sides level again.

Minutes later, Bangor had a chance to go ahead when the ball fell into the path of winger Sion Edwards but his first time shot went straight to the Rhyl goalkeeper.

In the 78th minute, a mistake from the Bangor defence let in the Rhyl attackers where a beautiful low cross was driven into the penalty box which was calmly tucked away from Rhyl’s Levi Makin to put his team yet again in front.

It was getting near the end of the game and Bangor found themselves a goal down, a minute before added time Porya Ahmadi produced a clever turn in the penalty area and was taken down by an opposing player. After previously scoring in the game, Steve Lewis stepped up boldly to take the penalty. All the fans had their hearts in their mouths as there wasn’t long of the game left. Lewis hit the ball confidently and sent the ball into the top right corner and the goalkeeper in the opposite direction to make the score 3-3.

It was in stoppage time and Bangor were desperately searching for the winning goal. From a corner kick the ball found Anthony Miley who from 5 yards out hit the ball straight against the post.

Rhyl quickly began to attack but were stopped in their tracks by the Bangor defence who cleared the ball up forward without any hesitation. The ball fell into the path of Bangor forward Steve Lewis who was through on goal with only the goalkeeper to beat, and unexpectedly, Lewis decided to lob the Rhyl goalkeeper. Everyone watched nervously as the ball went over the goalkeeper and fell into the back of the net. The crowd and players were ecstatic, the final touch of the game and Bangor found themselves in the lead for the first time, and Steve Lewis got his hat trick and the match ball. It was a great performance from Bangor, who never gave up and kept fighting until the very last minute and were very deserving of their win.