Bangor City on the up? 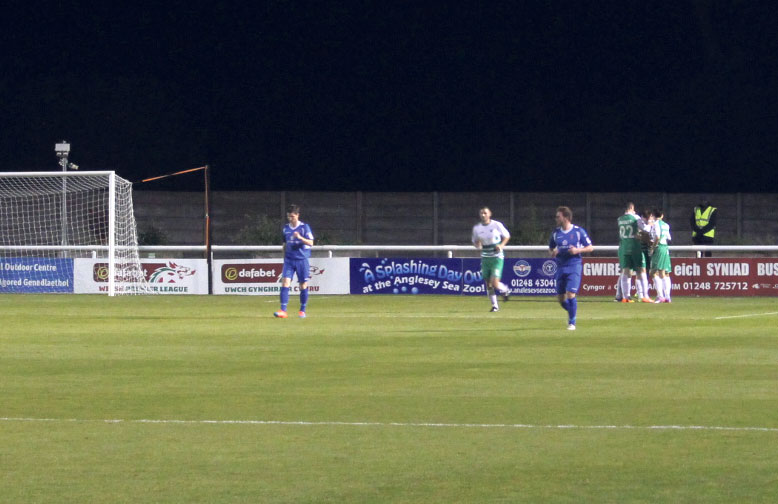 Bangor City FC fell victim at their own ground to the current Welsh Premier League champions and leaders The New Saints (TNS) on Friday 16th October.

They barely had a touch on the ball when TNS player Ryan Edwards scored from a rebounded shot off goalkeeper Connor Roberts after only two minutes.

Bangor then quickly sprang into action with numerous shots, including an audacious long range effort from Sion Edwards.

Bangor certainly had more possession and a greater number of noteworthy chances, but the only thing that was separating them at halftime was TNS’s opening goal.

The second half began as the first ended, with Bangor pressing, but a nasty injury interrupted play in the 54th minute which left goal scorer Ryan Edwards being stretchered off and replaced by Matthew Williams.

This injury didn’t work in Bangor’s favour, as it gave Craig Harrison’s side time to regroup and, when play got back under way, Bangor found it challenging to get a foot on the ball and break down their opponent’s defence.

In the 60th minute, TNS put the game well and truly to bed when Simon Spencer raced down the right wing and drove the ball forward to Aeron Edwards at the far post, who was left with the simplest of tap-ins within five yards. Despite all the cries from the home crowd calling for offside, the linesman didn’t raise his flag, and so the goal stood.

TNS nearly went three goals up when Adrian Cieslewicz’s volley hit the left post and, in the dying moments of the game, a Chris Marriott cross found the head of goal scorer Aeron Edwards which led to a superb diving save from Paul Harrison.

The seventh defeat of the season left Bangor City third from bottom with only nine points, whereas the comfortable away win proved why The New Saints are the champions and justifiably top of the table.

Bangor City FC followed this game with an away visit to fifth place side Newport AFC who were seven points ahead of them before kick-off. Newport had also recently lost their last game to Bala Town, so both teams were eager to redeem themselves.

Straight from kick-off, Bangor showed their focus by scoring in the first minute when Damien Allen’s cross went all the way past the opposition’s defence and goalkeeper to nestle into the back of the net. At the half hour mark, Bangor scored again with a brilliant passing display which was rounded off by forward Porya Ahmadi who had the simple job of sliding the ball in from six yards.

Bangor put the game well and truly to bed when Sion Edward’s cross found the head of defender Alan Cummins at the 70th minute to make it an impressive 0-3 away victory.

Bangor City showed real quality and looked sharper and focused compared to their previous games of the season, looking more reminiscent of the side that won the league back in 2011. The win leaves Bangor on 13 points. Still a long way off the top spot, but you never know after their recent win.

They certainly look like they will be improving on their overall performance from last year when they narrowly escaped relegation. Bangor City FC’s next game is a home match to Rhyl on Friday 30th in the evening.