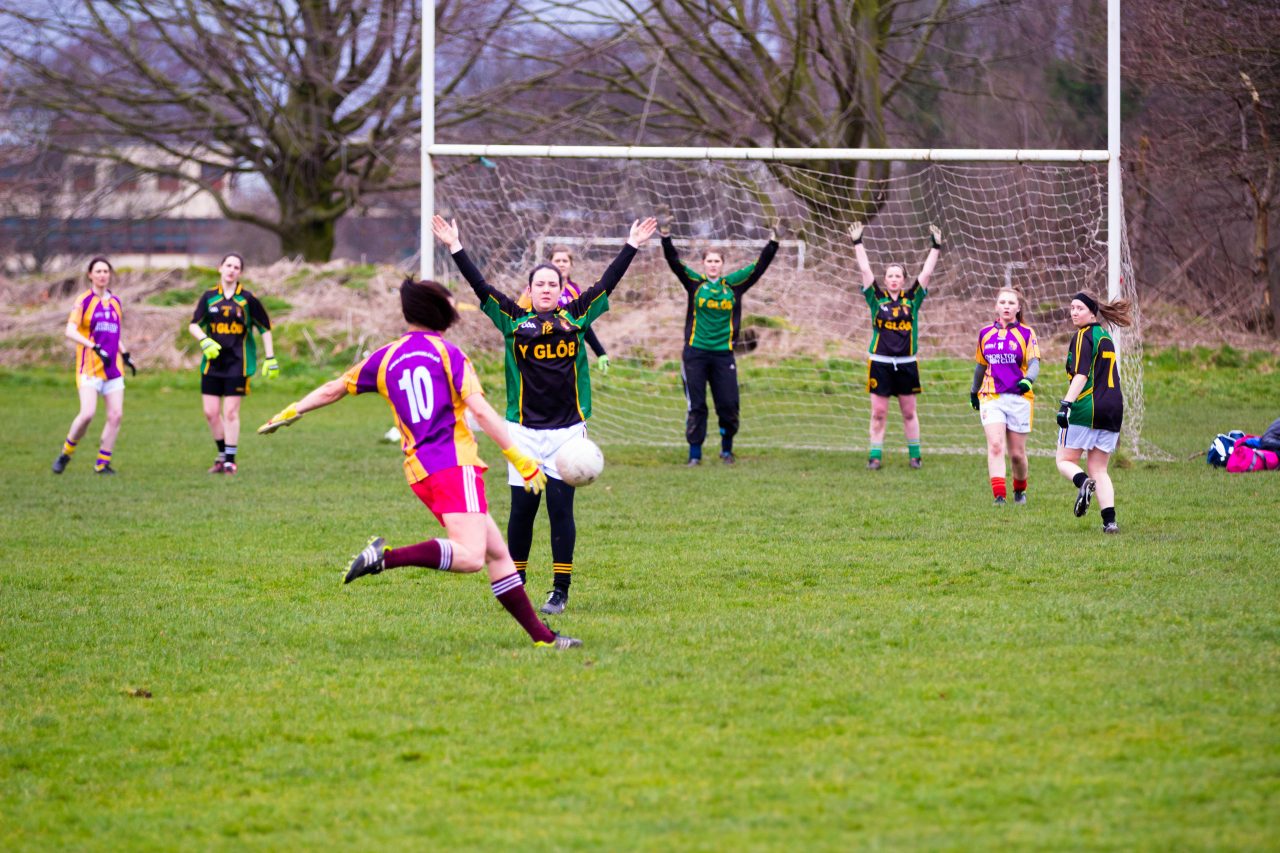 Bangor University Women’s Gaelic Football played a hard-fought battle against Manchester club side St. Lawrence last weekend. St. Lawrence’s are a well-established local league side, and proved a formidable test for a new-look Bangor team. Bangor were blooding new players into the side, with several players experiencing their first Gaelic Football fixture.

From the off it was a tough game for the away side, as St. Lawrence forced a smart save from goalkeeper Jade Ireland who denied the home team the first goal of the afternoon (worth three points). However, they collected the loose ball and scored a single point by kicking over the upright.

St. Lawrence added another single soon afterwards and then netted the first goal of the game, lobbing the away goalkeeper from distance to make it 5-0. Bangor struggled to gain possession of the ball, and when they did they struggled to get out of their own half. Bangor did have some good spells of play as they settled into the game, with new player Nancy Clare showcasing some good pace to get Bangor down the right flank. Unfortunately, Bangor overworked the play slightly and couldn’t get a shot away.

St. Lawrence’s superior experience was showing in the game, but Bangor held their own with some good interceptions, forcing the home team to shoot from range and opt for single points rather than goals. Their second goal did come soon after, however, due to a cruel deflection that wrong-footed Bangor’s goalkeeper, taking the score to 8-0.

Bangor pulled one back not long after, some good defensive work by Eimear Kelly and Casey O’Leary forcing a rare error from St. Lawrence’s attackers. Bangor broke, playing the ball down the right hand touchline before pulling it back for Danielle Murphy to score over the crossbar for Bangor’s first point of the match.

More bad luck in defence saw St. Lawrence score their third goal, the ball bouncing off the upright and falling kindly for an attacker to score into an empty net. St. Lawrence continued to add single points from long-range, Bangor’s defence improving throughout the game. Bangor’s attack also improved, with good, quick passing in midfield drawing a foul, from which Danielle Murphy scored her second point of the afternoon.

St. Lawrence continued to show their experience in the final few minutes, adding two more goals late on. Despite the scoreline, Bangor can be pleased with their performance against a very strong local side, and can build upon the foundations laid down in this fixture as they look towards next season.