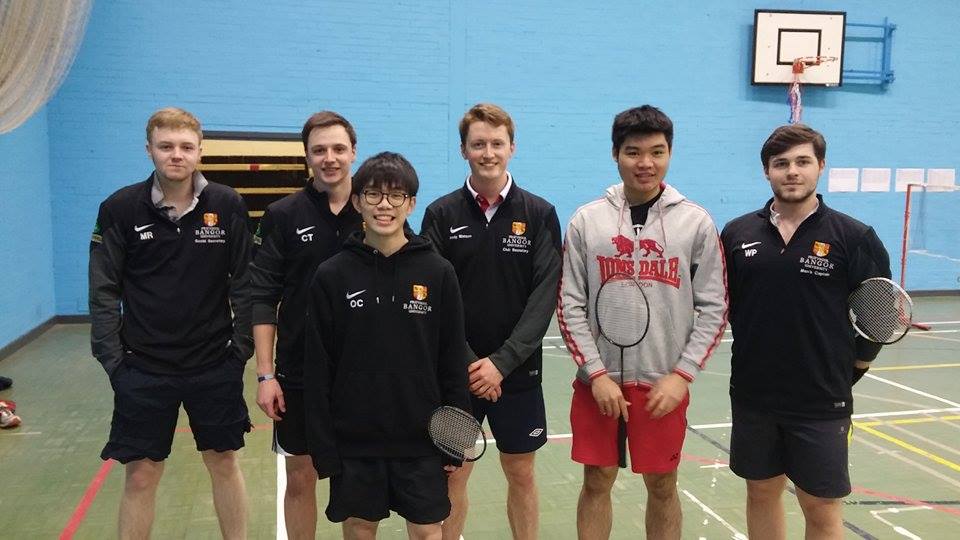 Bangor University Men’s Badminton recently won the BUCS Northern 2A league and securing promotion for next season, making them the joint-highest ranked regular BUCS team in the university, alongside high-flyers Women’s Basketball. Seren take a look back over their successful season.

Following the departure of a couple of long serving first team players at the end of last season nobody was quite sure what to expect from the 2014/2015 BUCS campaign. However, with no clear favourites for the league title forthcoming, there was optimism within the team as they would face off against Manchester 2nds and 3rds, UCLAN 1sts, Lancaster 1sts and Liverpool John Moores 1sts. Bangor’s recent history against their competitors was favourable and the season started strongly with a 7-1 victory over Manchester 3rds, giving Will Peck his first win as team captain.

With two tough away fixtures against Lancaster and UCLAN the team’s strong start stalled slightly with a draw against Lancaster, and a 5-3 defeat against UCLAN; both universities having improved significantly in comparison with previous seasons.

Some of our players are simply not suited to playing away from home; an unnamed member of the team was witnessed sprinting through Bangor in a desperate attempt to catch the bus, much to the exasperation (and mild amusement) of the members of the team who were able to get up on time…

The team bounced back however, winning their remaining two matches of 2014, taking full points against both Manchester 2nds and LJMU. As BUCS stopped for Christmas, the team found themselves joint top of the league with Manchester 2nds.
Following the break, the team kept their momentum going with victories over Manchester 3rds, Lancaster and UCLAN, with captain Will Peck leading by example with some very impressive performances in both the singles and doubles matches. These games also saw the emergence of Rayden, who joined the club midway through the season, and helped strengthen the team during a crucial period. These positive results left the team two points clear of Manchester 2nds with only two games remaining, meaning a win away at Manchester 2nds could secure the title for Bangor.

With first team regular Andy Watson unable to travel to Manchester due to lecture commitments, Bangor were forced to shuffle the pack, knowing that a win would secure the league but a draw would take the title race to the final Wednesday.

Bangor started strongly, and at the halfway stage were 3-1 up, with only two games between the team and the title. Will and Rayden secured the vital fourth game, securing at least a draw.

The honours fell to Club Captain Christian Taylor and Oscar Chan to win their final doubles game, giving Bangor a 5-3 win, and an unassailable lead at the top of Northern 2A.

Having now sured up the league, the team can concentrate on their cup semi-final against Hull 1sts on 4th March.