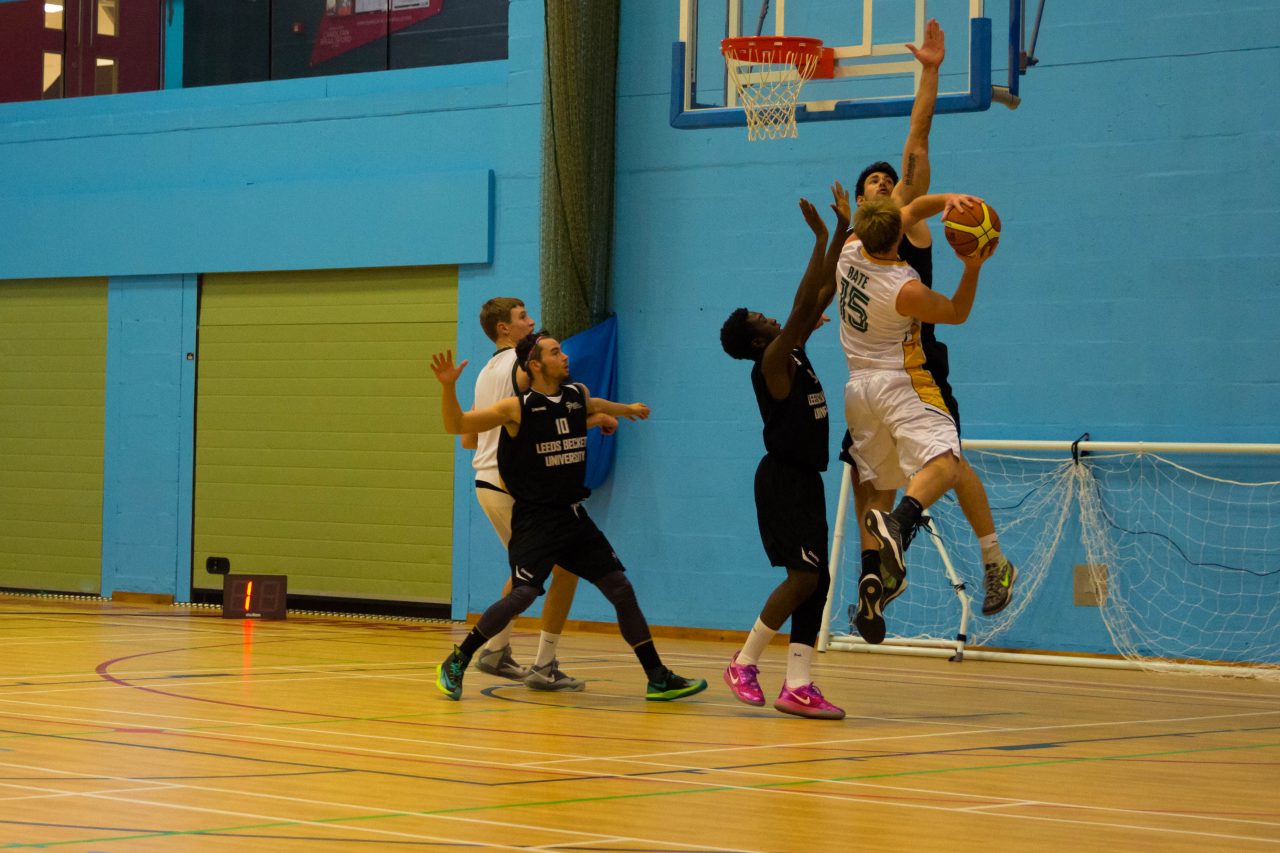 Men’s Basketball crashed out of the cup yesterday, following a triple overtime 84 – 86 defeat to Leeds Beckett 2nd’s. A win would have maintained the team’s 100% home record at home this season, and put them through to the quarter-final of the BUCS Northern Conference Cup. Unfortunately, it was not to be.

The home side led from the beginning, although there were reasons for concern as the team didn’t take their chances. A nice reverse pass from Jordan Lamb created a good chance but it was missed, as were both chances from a free throw early on. Bangor held their lead however, and the first quarter ended 17 – 10.

As the second quarter began, Bangor started to pull away. Their shooting was still below par, however, with the team collecting three rebounds in a row and missing them all, before giving Leeds Beckett the chance to break and close the gap.

Bangor’s coach called for the the team to settle and work through their plays, rather than be drawn in Beckett’s high-tempo counterattacking style of play. Tempers started to flare as Lamb disagreed with the referee, who awarded a foul against him. Seconds later and Bangor broke to win a free throw, which Lamb stepped up to take. Channeling his anger, he scored to make it 30 – 19 to the home side.

As the second half wore on, Bangor looked comfortable, their lead not having slipped below 9 points since the opening minutes of the game. Beckett’s no. 15 caused most of the problems for the home side, his height allowing him to collect the majority of rebounds in attack, and block Bangor’s shots in defense. His presence in the game was keenly felt by Bangor, as Beckett scored five baskets in a row to reduce the gap considerably. Bangor began to try and match Beckett’s counter attacking game, but they were unable to capitalise on the break, often allowing Beckett to come straight back at them. As the third quarter ended with a slam-dunk from Beckett no. 15, the momentum of the game was with the away side. The lead now cut to only three points, Bangor needed something in the final quarter.

Leeds Beckett were out on the court quickly, keen to keep their momentum going, which it did. Only a minute into the quarter and Bangor’s lead was slashed to a single point.  Baskets were exchanged back and forth, with the lead remaining at one point. Bangor needed to reassert their dominance on the game following a few missed chances from Beckett, including a three-point shot which span round the rim agonisingly before falling out – much to the relief of the home crowd, who let out an audible sigh.

With five minutes remaining in the game, Beckett brought the score to 50 – 50 and looked to take the lead for the first time. Neither side could take their chances though, Beckett breaking on the counter, only to travel at the last second. Bangor called a time-out with the score still tied and just over three minutes on the clock. There was more drama before the final whistle, as Beckett travelled with the ball twice on counter, giving Bangor a big let off. The home side were again lucky, when a free throw was missed but allowed to be retaken as a defender stepped into the key too early.

The game looked to be out of Bangor’s hands, two points down with 8.8 seconds on the clock before they won a free throw. With immense pressure on him, Bangor’s Andrew Gilbert stepped up to score both shots and take the game into five minutes of overtime.

Every shot counted in the next five minutes, as Leeds Beckett went ahead 61 – 65. With 6.2 seconds on the clock, Bangor trailed by two points, and Leeds Beckett won a free throw. It all looked over for the home side, until the Beckett player missed both chances. With less than 5 seconds on the clock, Bangor broke for the basket and were fouled – gifting them a chance to level. Again, it looked to be over for Bangor, as they only scored one of the shots, leaving them one point short. Collecting the rebound however, Bangor were fouled and another free throw was awarded.

In an extraordinary twist of fate, Bangor had gone from potentially being four points behind, to one point behind, to now having the chance to win the game. Bangor’s shooter scored the first shot, drawing the scores level. Unfortunately, he missed the second, sending the match into another five minutes of overtime.

Mentally and physically exhausted, both teams battled it out once again for a place in the quarter-finals. Both Bangor and Beckett missed shots from free-throws, leaving the score tied with 20 seconds of play left and the ball in Bangor’s hands. Looking for an opportunity, Bangor couldn’t find it and had to shoot from the three-point line as the buzzer sounded. The ball smacked the rim of the basket and the game went into triple overtime.

In the third round of overtime, Beckett worked up a small lead of four points, putting them two scores ahead of Bangor. The game had been slipping from underneath Bangor since the third-quarter of normal time, and Beckett finally took control of the game, leading by two points with a minute left. Heartbreakingly, Bangor gave away a free throw with 1.7 seconds remaining, to close the game and see them crash out of the cup.