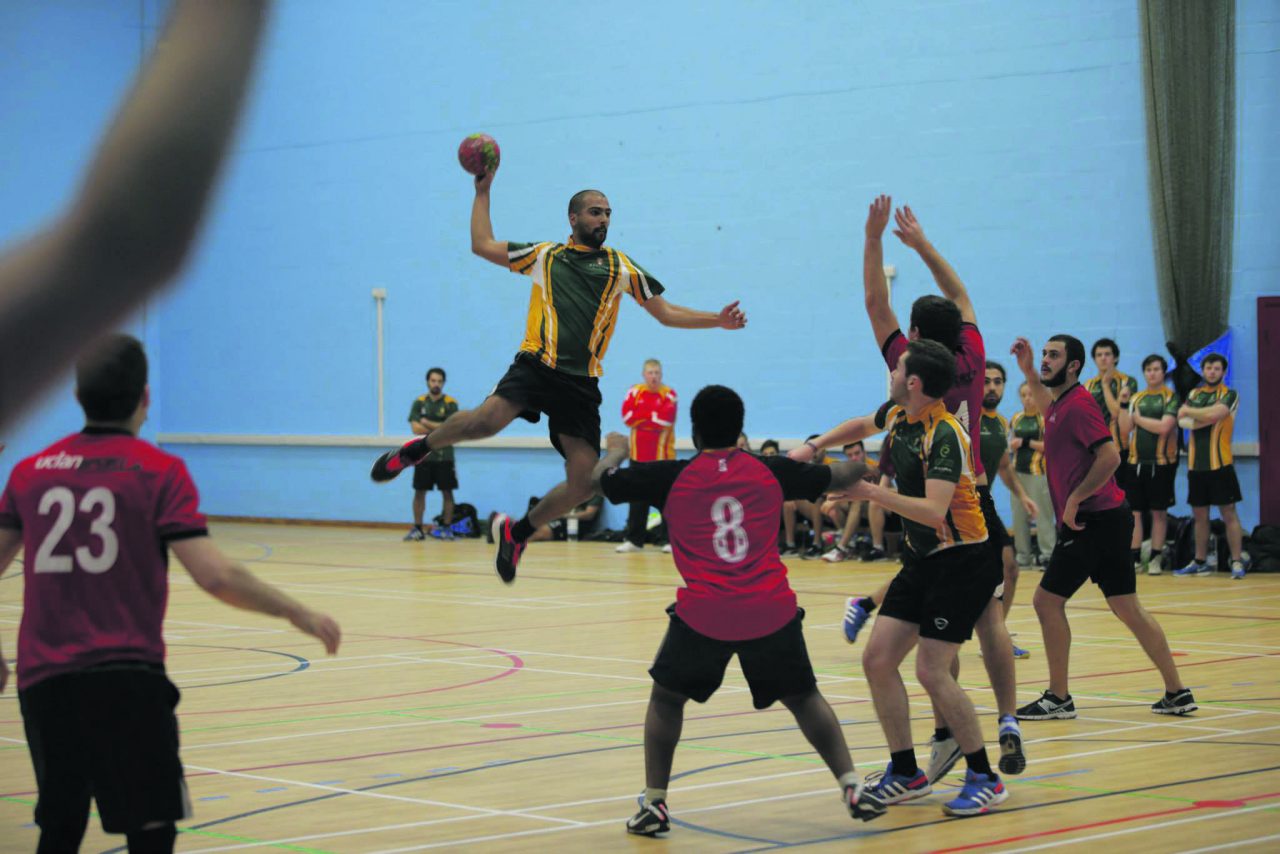 Following on from their success at a regional tournament in Liverpool, in which the men’s team went undefeated and claimed the trophy, Bangor were looking for a good result to take into next weekend’s national qualifying round.

In front of a packed crowd, the men’s team started slowly and found themselves 3 – 0 down within the first five minutes against a strong UCLAN side. The occasion seemed to be getting the better of Bangor, whose passing and shooting was well below par. After ten minutes, the home side settled into the game and brought the score back to 3 – 3, with goals from Jaber Al-Mulla and Sam Little.
The game was tight for the rest of the first half, with Bangor slowly asserting themselves more, taking the score to 10-8 at half-time.
Bangor’s defence started much better in the second half, being more aggressive and shutting down UCLAN’s Taylan Akcal, who scored six of the team’s eight goals in the first half. This was in stark comparison to the home side’s goals, which were shared throughout the team. Unlike in the first half, where they were chasing the game, Bangor controlled the tempo in the second half and played to their strengths, working the play to create good chances on goal. A penalty save by Bryn Griffiths denied UCLAN the chance to close the gap, which now stood at four goals, thanks to Aaron John scoring three on the bounce. In the closing minutes, Bangor added another to put the final score at 24 – 19, keeping the team unbeaten going into this weekend’s national tournament qualification round.
The women’s team were looking for a good performance against a very strong UCLAN side that narrowly beat them last time out, Bangor losing 6-5. Bangor were a new look side, with only two players with experience prior to this season, and two players in their first game. Bangor were also without their first choice goalkeeper, Anna Barton, who picked up an injury in the warm-up.
UCLAN started well, with brilliant link up play between Cheryl Heard and pivot Edita putting them well out in front. Bangor looked to respond, and created a few good chances resulting in shots on target from Charlotte Friend and Stephanie Yeabsley.

The breakthrough eventually came from Anna Prieto, an international student from Brazil. Receiving the ball from the goalkeeper on a counter attack, she was one on one with the UCLAN goalkeeper and scored. This lifted Bangor’s defence and they shut out UCLAN for the next few minutes. Lauren Brooks and Camilla Vianna the pick of the defenders, tackling their opposite numbers and breaking up the away team’s play.
Unfortunately, Bangor struggled to contain the UCLAN pivot, who caused them constant problems, scoring multiple goals. Anna Prieto once again got on the scoresheet for the home side, eventually scoring six of the team’s seven goals, the other coming from captain Ana Lovin.
Despite the match finishing 7 – 20 to the visitors, Bangor could take some real positives out of the match before next week’s national qualifiers.