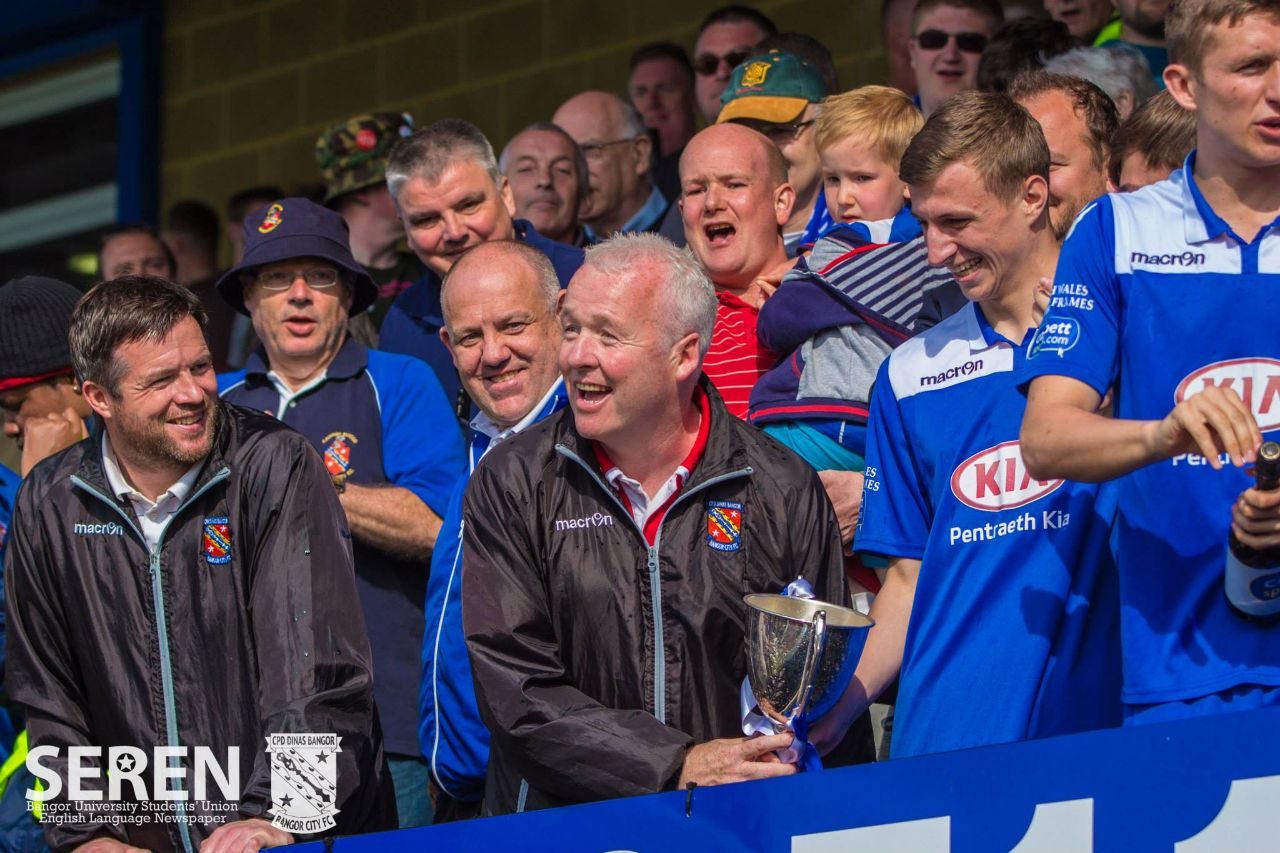 For Bangor City the 2013/14 season ended on a massive high when they defeated rivals Rhyl FC 2-0 and booked their place back in Europe. Seren took some time to catch up with manager, Nev Powell, back in May to find out how he felt about the season.

It’s probably fair to say you had a bit of a tough start to the season, with a very young team. To end the season back in Europe must feel great, especially after not having such a great start?

Yeah, we’ve always had quite a young side but at the end of last season we let quite a few go and had to get a lot of younger players in. We could never have envisioned the injuries either. We’ve had James Brewerton out all season, injured in a friendly and Damian Allen was out for a few months. Chris Roberts another of our experienced lads was out for a bit too.

So if you look at it from that perspective our young lads; Joe Culshaw, Iolo Hughes, Jamie McDaid, have come in and done really well being thrown straight into it.

There’s such great team spirit and the lads are all such a close bunch which really helps. Teams like TNS are able to get a lot of the most experienced players with their budget. We often go for the younger, local lads and we’ve proven that it works. I think we tend to make good players even better.

And you’ve returned to Europe after beating your rivals Rhyl which must be the icing on the cake. But a number of people have been saying that you end up playing Rhyl too much…

You can say we play Rhyl too many times but from my point of view, it’s a local derby and there’s no good saying ‘oh this is the sixth time we’ve played them’ because it still adds something important.

The more we play them the more we know their strengths and their weaknesses, we’re able to work out strategies. We’ve beat them three times in the last month or so and its about getting that winning formula. There’s a lot of psychology in football and I think we’ve really managed to get the edge.

It was such a great win that meant a lot for the team and over 1400 people turned up to Nantporth to watch. Did that make the win even better?

Bangor is the biggest side – the best supported side in the Welsh Premier League. Even as a player back in the 80s, you always knew you were going to get a good following. They always go that extra yard and on the pitch you can really feel that buzz from them. They were great for us on Saturday.

Even been stood on the touchline you can feel it and as an opposing player you must be stood there thinking ‘what is this’. It’s superb, they’ve been superb for us all season.

Even in the games out in Europe we’ll still have 100 Bangor fans there and I think it’s really nice for them to be able to experience that too. Its our job now to make it even better for them, we’ve really got to challenge for that league title again.

So we know you’re about to return to Europe but what was it like having a year away? Do you think maybe it was good for the team to have a bit of a break from it?

I’ve been managing Bangor for 7 years now and we’ve been in Europe for 6 of those. Its hard work, the lads have a few weeks and then we’re straight back into training. That’s how its been for those years so I suppose it is good to be able to have had a little bit of a rest, time to recharge our batteries.

It’s not nice to lose but we’ve had a really positive, great season. Yes we missed out financially last season but we’ve had 6 good years and we’ve bounced straight back even when a lot of people, even some at the club, didn’t believe we could. We just had to have that belief. We have four or five experienced players and so we know we always have a chance. That spirit amongst the team is really important and to have gotten through this season, and the playoff, with such a small squad is great.

And now going back into Europe, it is really all about the experience and giving that to those younger players. They are the future of Bangor and perhaps one day we will be able to be a full time club. We won the league as a part time club and when you see TNS, as a full time club, winning it and having it wrapped up by christmas you’ve really got to look at how we won it as a part time club. That wouldn’t happen anywhere else. In the conference it’s the part time clubs who are right at the bottom of the league.

No one else will do that and that will live long with us.

The club has seen a lot of changes and upgrades recently, can you tell us a bit about the 3G pitch and what that will mean for Bangor City?

The 3G pitch is kind of setting up links with the university. We’re hoping to maybe get some scholarships, and then if we can go into being a full time club in the future it’d be great.

And perhaps a difficult question, but if you had to choose your player of the season who would it be?

It’s a really tough one. We’ve had a lot of the young lads do really great. Anthony Miley, Dec Walker. And then we’ve had the same off of Les week in week out.

But for me as a manager it has to be Sion Edwards. Especially around Christmas he’s played some of his best football for us and given us some great goals. He’s an unsung hero, he’s worked his socks off out there on the left wing. He’s been playing in a difficult position where he’s also had a lot of defending to do. His delivery from set pieces as well has been brilliant. He’s not missed many matches for us either and he’s just been really good, he deserves a lot of praise.

So you and the team have deserved a bit of a break after all your hard work but what’s next for you guys?

Well the lads are back in training in just a couple weeks and we just need to keep ticking over and try and progress even more. But this season, it’s just been unbelievable for us to be up there.