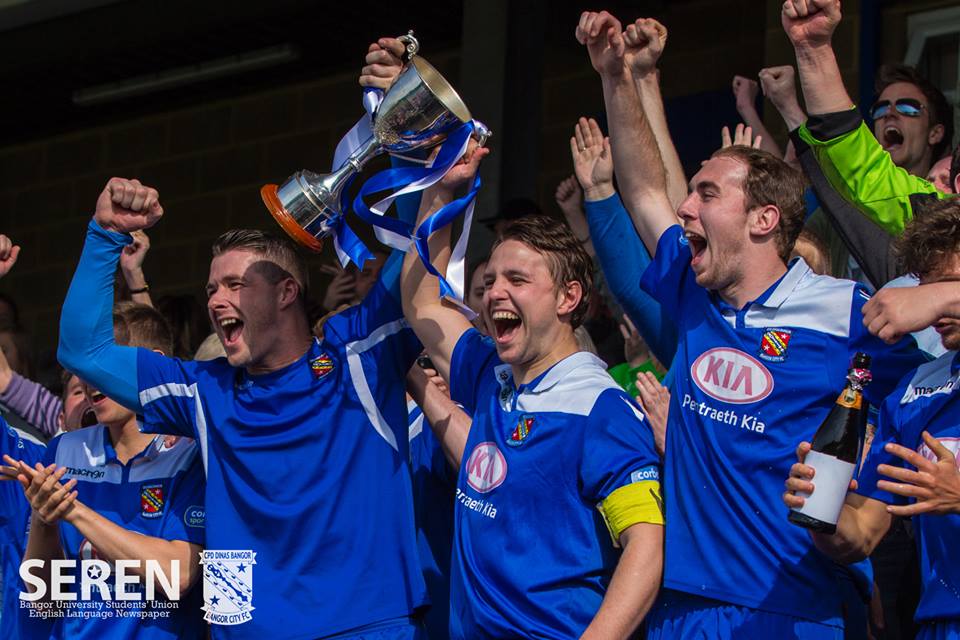 On a sunny day at the busy Book People Stadium, Bangor triumphed over Rhyl FC to return to European football after a one year absence. Finishing 4th in the Welsh Premier League, Bangor were confident of progressing to the Europa League qualifying stages against a 6th placed Rhyl side they had beaten twice in the last month.

The game started very cagey, with neither side able to dominate possession and create many chances within the opening ten minutes. Rhyl’s Peter Dogan earnt himself a yellow card with a tough challenge on Bangor left-wing Sion Edwards. The first twenty minutes continued in the same vein, with neither team really asserting themselves. The first real chance of the half came from Sion Edwards, whose cross was knocked down by striker Les Davies for Chris Jones, who volleyed inches wide of the Rhyl goal. Straight back at the other end and Bangor City goalkeeper Jack Cudworth was called to make his first save, diving low to his right to keep out a strong header from a Rhyl corner.

A sustained spell of pressure from Rhyl came as Bangor tried to play the ball out of defence rather than opting to clear it long. Fortunately for The Citizens, Rhyl could not capitalise. Rhyl striker Steve Lewis received an unnecessary yellow card for going in late on Bangor goalkeeper Cudworth. Bangor once again went close with Jones played in behind Rhyl’s high line, but he was pushed wide by the defender and can only produce a weak shot which goalkeeper Ramsay easily saved, leaving the score 0 – 0 at half-time.

Bangor City manager Neville Powell’s words at half-time must have done the trick, as Bangor begin to start spreading the ball around on the deck, rather than trying to win the ball in the air against Rhyl’s tall back-line, as they tried to do in the first half. The first real action of the second half is another late challenge by Peter Dogan, who already on a yellow card, is shown another for a red. Rhyl FC down to 10-men. Bangor could have lead soon after, when Rhyl defender Chris Rimmer missed his clearance, but Jones failed to gamble and the ball rolled out harmlessly for a goal kick.

Bangor’s periods of pressure soon told, as they won a throw deep in the Rhyl half on the right. The initial ball in is cleared, but only as far as Les Davies, who takes one touch before slotting the ball left footed into the bottom right hand corner of the goal from 22 yards. Bangor lead 1 – 0.

Bangor pressed for a second, as substitute Jamie McDaid caused Rhyl problems down the right hand side. A cross from McDaid resulted in a handball from a Rhyl defender, and the referee awarded a penalty, much to the delight of the vocal home crowd. Goalkeeper Ramsay and midfielder Mark Cadwallader protested, and received yellow cards for their troubles. Chris Jones was the man to step up for City, and he fired down the middle to surely send The Citizens into Europe. Rhyl FC began to lose their heads in the last ten minutes, and a rash challenge from substitute Tom Donegan resulted in another red card, and the away team were to play out the last ten minutes with nine men. After a scrappy final few minutes, the referee blew for full time and Bangor City returned to the Europa League and European football for the first time in a year.