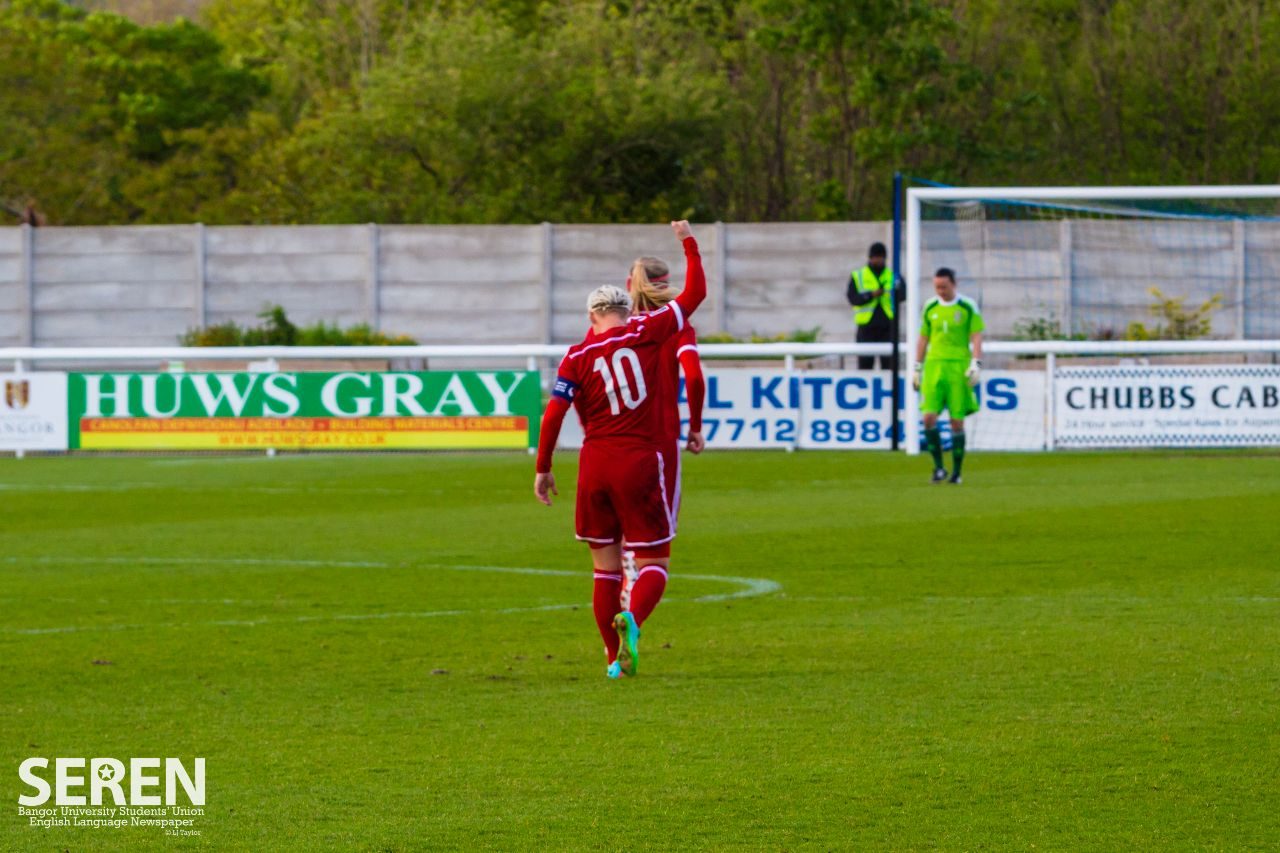 Bangor City did their country proud as they hosted the relatively high profile World Cup qualifier between Wales’ Women and Montenegro’ Women at their Nantporth stadium on Tuesday night.

It wasn’t only the hosts who did Wales proud however, but the country’s finest female footballing talent well and truly thrashed their Montenegrin counterparts 4-0.

From the first blow of the whistle Wales were in control, tight on possession and lively in pace. Towards the end of the first 10 minutes the home team had begun to test the opposing goalkeeper, Marija Zizic, with a few decent shots on goal.

At just 11 minutes the visitors had given away a free kick which was taken by Captain, Jess Fishlock, dropped by the Montenegro keeper and tapped in by Sarah Wiltshire; 1-0.

It took just 3 minutes for a great cross into the box from Wales’ number 9, Natasha Harding, which was hit home by Fishlock giving the girls a comfortable lead within the first quarter of an hour. The goal was yet another slip up from Zizic who had come out of her box only for Fishlock to be unmarked.

The ball was controlled completely by the home side, often with their whole team in Montenegro’s half – bar keeper Nicola Davies who had little to nothing to do in the first half with the visitor’s looking nowhere near close to being a threat.

Very early on it became Montenegro’s tactics just try and overpower their opponents but instead found themselves just giving away constant free kicks or corners from which Wales looked dangerous.

Another set piece was foolishly given away at 23 minutes after a bad tackle on Fishlock from Jovana Mrkic, which was taken by the Captain and hit straight over the wall and into the net for her second of the evening.

The rest of the half saw even more attempts on goal but Wales couldn’t quite extend their 3-0 lead. Despite that though they continued to hold possession and showed some great technique and teamwork.

A lot of the home side’s attacks came from some brilliant passing down the left wing between Sophie Ingle and Harding.

For Montenegro it seemed to no longer be about getting back into the game but just keeping out any more goals.

Wales’ last chance of the half came from yet another free kick, taken by Fishlock and nearly knocked in but a foul on the goalkeeper led to a free kick instead.

The second half begun with Montenegro’s goalkeeper being replaced by Iva Miliacic, presumably in the hope of getting some goals back and not letting anymore in through slip ups.

The half started at a lot slower pace than the first but Wales still dominated possession and within 4 minutes there was yet another goal.

A fantastic cross from Harding was once again picked up by Fishlock giving her her hat trick and her team a 4-0 lead.

The home side managed a number more shots on goal but by the hour mark they seemed to be getting tired as Montenegro started to gain a little more possession. The first yellow card of the evening eventually came, presented to Sladjana Bulatovic for a tackle on her opponents’ captain and the second came soon after to Jasna Djokovic for yet another tackle on Fishlock.

The Welsh Captain had a few more attempts on goal before she came off the pitch, to the loudest applause of the evening, with Nadia Lawrence taking her place.

In the final few minutes Montenegro managed to keep a hold of possession to make a few desperate attempts on goal but only managed to force the one save of the game  from Davies which the 574 strong crowd responded to loudly.

It was a thoroughly deserved win for Wales’ Women who outclassed Montenegro from the very start, tightening their grip on second place in Group 6 below England who also won 4-0 against Ukraine.

Not only was the match a great display of women’s football but showed how Bangor City have grown in the last year, with a lot of hard work behind the scenes making hosting an international match look effortless. It’s going to be great to see what the club can get their hands on in the coming year.