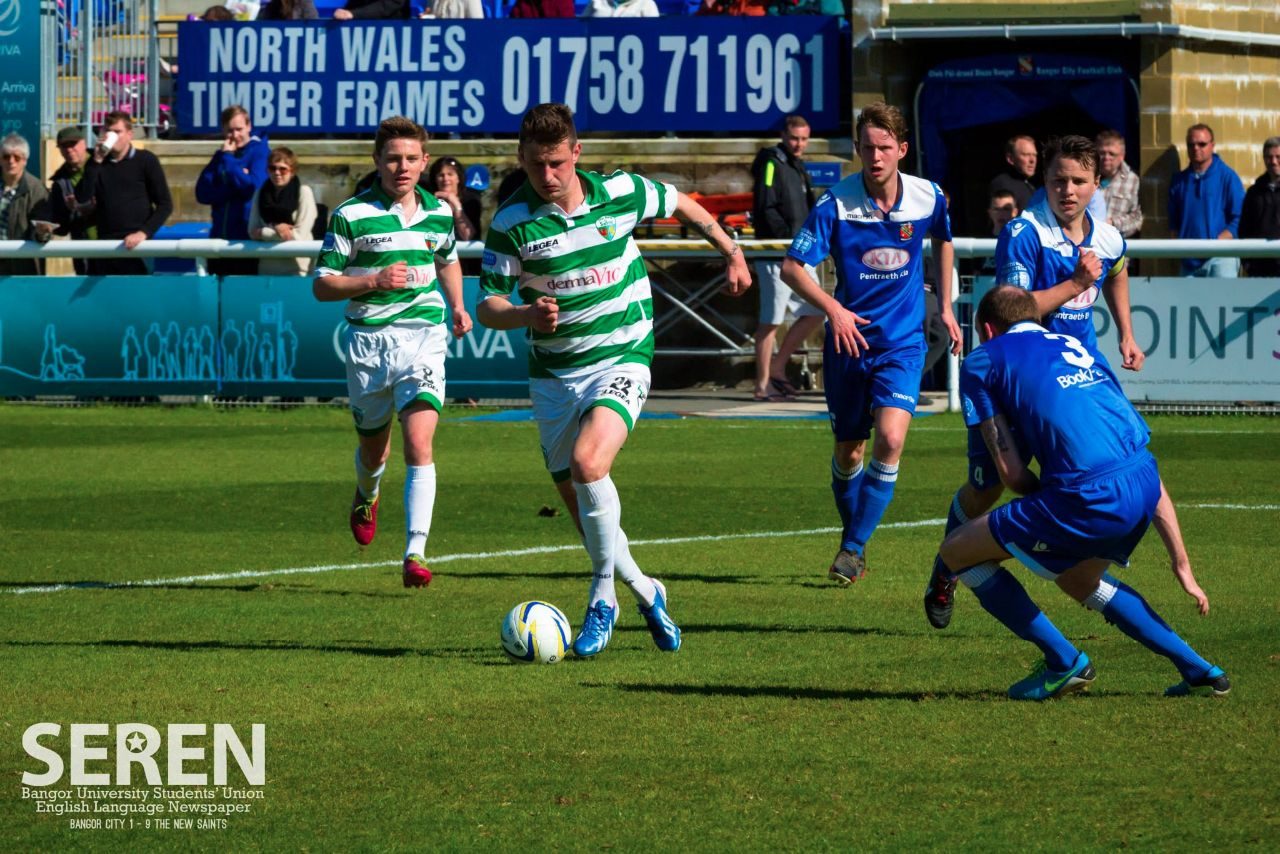 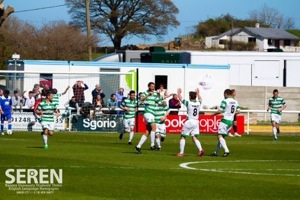 When The New Saints travelled to Bangor this Easter weekends it certainly was a Good Friday; the Saints showed City exactly why they are about to be crowned Welsh Premier League champions for a record eighth time in an embarrassing yet impressive 9-1 win.

Bangor came into the game at third place with no chance of taking second from rivals Airbus but in front of a strong home crowd the Citizens were definitely hoping for a win over the about-to-be-crowned champions. Whilst this is the end of the domestic season for Bangor, playoffs for the second Europa league place will be getting under way next weekend as they take on Rhyl at Nantporth.

The home side kicked off and things were looking good for Bangor in the opening minutes but their shot on goal was weak and quickly gathered into TNS Keeper, Paul Harrison’s, hands. It didn’t take long before City were giving the ball away cheaply and just after the 5 minute mark a slip up in Bangor’s defence saw Matthew Williams take the ball past Jack Cudworth and into the top left of City’s net; 1-0.

Bangor kept their energy up, fighting for the ball, keeping pressure up, but TNS remained unfazed. The visitor’s managed to retain ball and through consistent passing put Bangor under pressure, and had a decent shot ruled offside. 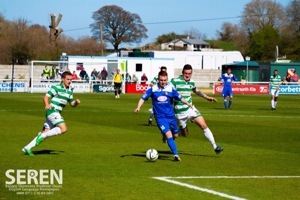 Things started to pick up as Bangor put pressure on TNS from a free kick, with a throw in leading to a corner, taken by Sion Edwards and Corey Jones wrong footed the defenders to head the ball straight into the net. At 1-1 it felt as though this could really be shaping up to be a great and close game.

Moments later though the Saints retook the lead with a long range effort from Greg Draper that left Cudworth unable to do anything.

From here on in the game was pretty much controlled by TNS who kept the pressure up, forcing several saves.

A foul on Cudworth rose the temperature followed by a foul by Bangor leading to a quickly taken free kick and Chris Seargeant making it 3-1 after weaving through the unprepared defence.

TNS continued to show why they’ve only lost three games this season, with quick passing and a determination to retain and win back possession. Bangor look like the young side they are – lots of fire and passion, but little substance. 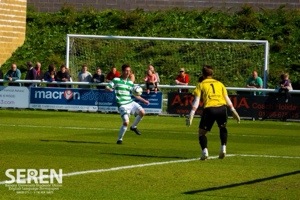 Youthful mistakes led to a fourth for TNS, with Bangor keeper Cudworth missing a simple take, leaving Scott Quigley an open goal to take it to 4-1.

Tempers soon started to rise for Bangor, frustrated by the lack of possession. Les Davies received a talking to for a heavy shoulder in the centre circle. TNS continued to pressurise Bangor with a stunning fifth goal by Greg Draper scored by some simple build up play and a run through the defence that outclassed Bangor.

Les Davies, for once victim not perpetrator of some rough stuff managed to win a Bangor free kick it it was sent straight to a defender. The home side got another chance from a set piece with a corner, but TNS weren’t about to make the same mistake twice and ball was headed clear.

Things started to settle down with TNS seeming to sit back, and a corner led to Bangor’s best chance since the goal with a Chris Jones header just going wide. 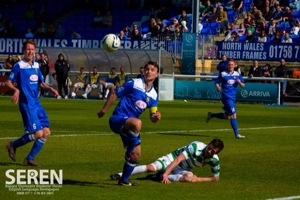 After three Bangor chances, TNS seemed to wake up again just before half time, with a stunning strike just the wrong side of the post.

Bangor created another excellent chance, with a Les Davies shot across the face of the goal just short of Chris Jones’ boot on the stroke of half time.

The opening of the second half saw TNS straight on the attack in numbers, not afraid to pass around in the box. Eventually though a heavy Bangor defence was able to clear the ball leaving their opponents to build up the attack once again.

It wasn’t until a series of corners for The New Saints that we saw more chances on goal. The first connected brilliantly with Draper’s head but luckily Cudworth stood between him and the back of the net. The ball went out for a second corner and this time was confidently cleared by Sion Edwards’ head.

City we’re noticeably starting to get frustrated with each other at this point with TNS’ hold on possession becoming little more than them simply passing it around.

TNS weren’t done for the day yet and a certain second goal from Matty Williams saw Miley go to stop it only to help it on its way with his head; 6-1.

The most recent goal seemed to have wet TNS’ appetite again as they continued their attack. Beautiful control from Quigley straight through the Bangor defence saw a shot blocked by Johnston only to be hit on the ricochet and into the back of the net for a seventh.

A frustrated challenge from Les Davjes left TNS’ Ryan Edwards on the floor, just minutes after coming off the bench, and awarded the City striker a yellow. Luckily, perhaps, for Bangor it was a wasted free kick though that hit the Bangor wall. 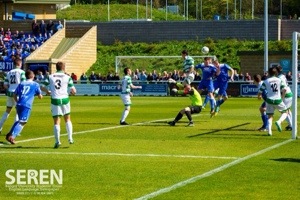 Hopes of perhaps a consolation effort from Bangor were rekindled with some hard work from Ryan Edwards and Joe Culshaw but it felt as though the rest of their team had given up. Some nice control from Sion Edwards was the closest to a highlight for the home fans who had been slowly leaving the Book People stadium between TNS goals, but the usual City hero was unable to get out of his own half.

With no chance left for Bangor to turn things around manager, Nev Powell, gave some of his first team players a rest bringing on a couple of rarely seen players in Phil Warrington and Iolo Hughes.

TNS continued lazily passing the ball around as if it were just a training session and Bangor had a few chances to take back possession but could never do much with it. Another City slip up saw Cudworth responding too slowly to a back pass and Draper taking advantage to make it 8-1.

The visitor’s rounded things off with a lovely volley straight into the back of the net in the dying seconds leaving the final score at 9-1.

There’s little to say about the game other than TNS simply were the better team by far and it’s east to see why they have already secured the league title with a game to go.

Let’s hope that the heavy defeat gave Bangor the wake up that they need ahead of their playoff match against Rhyl at home next Saturday.