Bangor bounce back…but is it too late 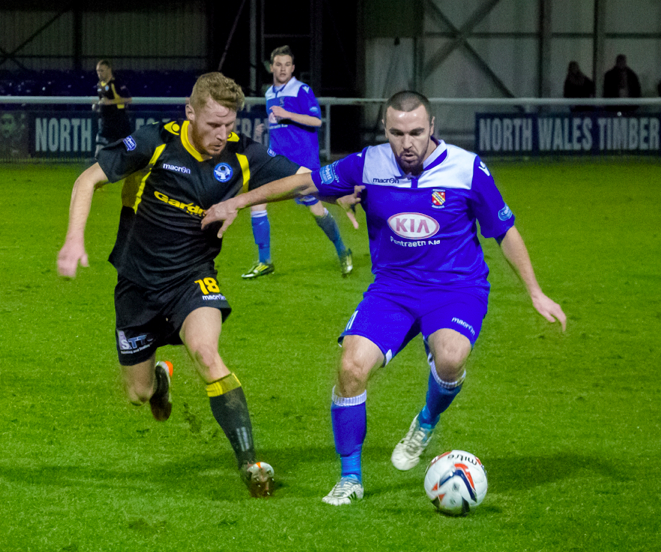 The race is on for Champion’s League and European glory in the Welsh Premier League.

As it stands Bangor City sit in third place, a fraction above Rhyl who have a game in hand. It’s been a difficult start to the second phase of the season for the Citizens with a difficult run of games which has seen them play TNS and come up against Airbus a number of times (in both the league and cup matches).

The January transfer window saw a few new additions to the team with the likes of Gerwyn Jones and Jay Colbeck. The former made an immediate impact, solidifying the Bangor defence. Colbeck on the other hand had his promising start taken away from him after a controversial sending off in Bangor’s 4-2 defeat to Airbus. The youngster had just lifted Bangor’s hopes with his debut goal for his new side before being shown red.

That same Welsh Cup match was goalkeeper Lee Idzi’s final outing for the blues after deciding to leave the club due to personal reasons – suspected to be due to his living in South Wales. Bangor managed to sign 23 year old Jack Cudworth from Nantwich Town at the end of the window.

Cudworth however suffered an injury in his debut for Bangor, against Airbus, that left the Citizens worried that he had broken his ankle. Luckily Prestatyn Town were willing to loan out Dave Roberts for the remainder of the season. Bangor’s goalkeeper problems weren’t yet over though with Roberts receiving a straight red card for coming out of his box to make a challenge against TNS last month.

Despite a string of bad luck and difficult matches though Bangor seem to be getting their campaign back on track and are playing much more fluently as a team. As always Sion Edwards is putting in some great performances and youngster Jamie Petrie is really coming into his own on the pitch. In fact Petrie, as of late, seems to be taking away some of the glory from fan favourite Les Davies!

Bangor’s form is slowly improving as they hope to continue their chase for European football though it may be a little too late. TNS currently top the league with 57 points and Airbus just below them with 54, whilst Bangor hold third place with 38. Its looking now as though Bangor’s real battle is to keep a hold on their spot above rivals Rhyl.

Whilst Bangor’s loyal fans are likely feeling a little underwhelmed and disappointed with this turn of events there’s definitely still a lot of exciting football to be seen in the closing stages of this campaign.