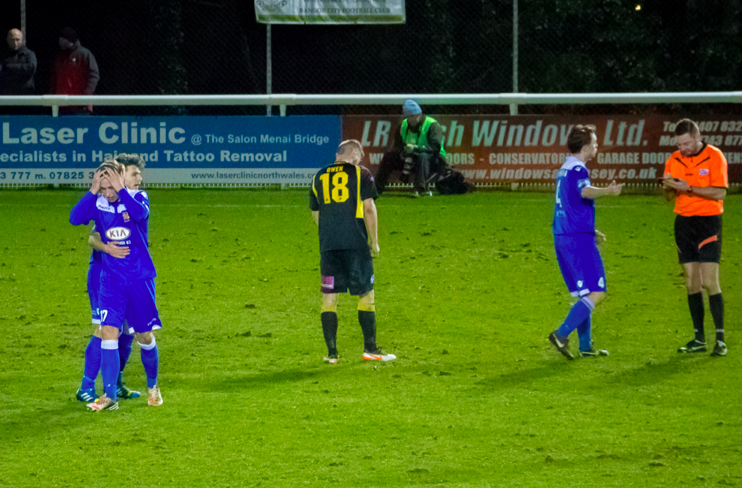 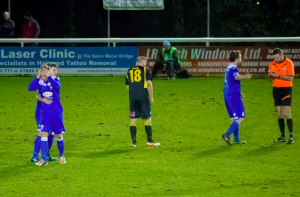 It was a disappointing Tuesday evening for Bangor City as top flight Airbus beat the home side for the third consecutive time.

The match, which had already been rearranged due to bad weather, saw Bangor up against the Wingmakers once again following their Welsh Cup defeat earlier this month. The home team began the game positively with some early chances on goal thanks to Sion Edwards on the left wing but they couldn’t quite find their target past keeper Coates.

City’s early efforts however uplifted the crowd on a cold Champion’s League evening and breathed hope into Nantporth that their team could finally stop Airbus’ streak.

At the seven minute mark the hope was sucked out as the Wingmakers new boy, Andy Jones, netted the ball to give the visitors an early 1-0 lead.

It was all Airbus’ game from then on. Whilst for a short while it seemed that Bangor were playing better it only took Airbus to get hold of the ball and they were taking shots on City’s new goalkeeper, Jack Cudworth.

It was Cudworth’s first outing as a Citizen and whilst he hoped to avenge predecessor Lee Idzi’s defeat at the hands of Airbus in the cup, things were not at all going to plan. At 23 minutes Ryan Wignall made it 2-0 and things went from bad to worse for the homeside as Cudworth began to struggle on his feet.

The newcomer stayed on the pitch but had to rely on defender Dec Walker to take his goal kicks and he soon left the pitch, with a reported broken ankle, making way for Nick Bould to make a rare appearance in the Bangor net.

The Wingmakers proved too much for Bould too when, despite an initial save, Steve Jones caught the rebound and gave his team a 3-0 lead.

Possession was still all Airbus’ with Bangor showing no signs of improvement and the crowd were angered by a challenge on Sion Edwards that was ignored by the referee and left the Bangor veteran struggling to stay on his feet.

At half time the 3-0 scoreline was begging to increase.

And only ten minutes in a well connected head from Steve Abbott beat Bould once more; 4-0.

The only plus side for Bangor was that Sion Edwards had seemed to recover but even that wasn’t enough for the home side.

Bangor slowly began to pick up the pace with Les Davies stepping up to the challenge and forcing a few good saves from Airbus’ Coates and newcomer, Jay Colbeck, piled on the pressure giving the home fans a bit of hope.

It took Edwards and Petrie to come off and be replaced by Corey Jones and Jamie McDaid before Bangor were finally able to get a consolation goal. The goal, which had felt a long time coming as the Citizens finally seemed to come alive, was scored by Colbeck marking his first goal for his new side.

The atmosphere around Nantporth finally began to change as the team, and their supporters, started to believe there was still a chance as Airbus waned. And minutes later a scrappy attack in Airbus’ box gave Bangor their second thanks to Anthony Miley.

The goal had to go largely uncelebrated though as a scrap in the box and confusion swept across the stadium. Calls from the stands were for Airbus’ Wignall to be shown the red for apparently kicking one of the Bangor players but it was goal hero Colbeck that was sent from the pitch for reportedly throwing the ball.

The disappointment on the youngster’s face showed it all; Bangor had finally found momentum, had convinced themselves they had a chance and it had been taken away in an instant from an official who had been on the wrong side of the crowd all night.

Disappointingly Bangor seemed to stop played after losing Colbeck, letting anger take over as they aggressively tried to fight back. Yellow cards were shown at almost every Bangor player to make a challenge whilst Airbus seemed to get away with what they wanted.

Bangor’s anguish was finally brought to an end at 4-2 and the anger seeping from the stands at the red card had unfortunately left the homeside’s valiant last 15 minute effort forgotten.