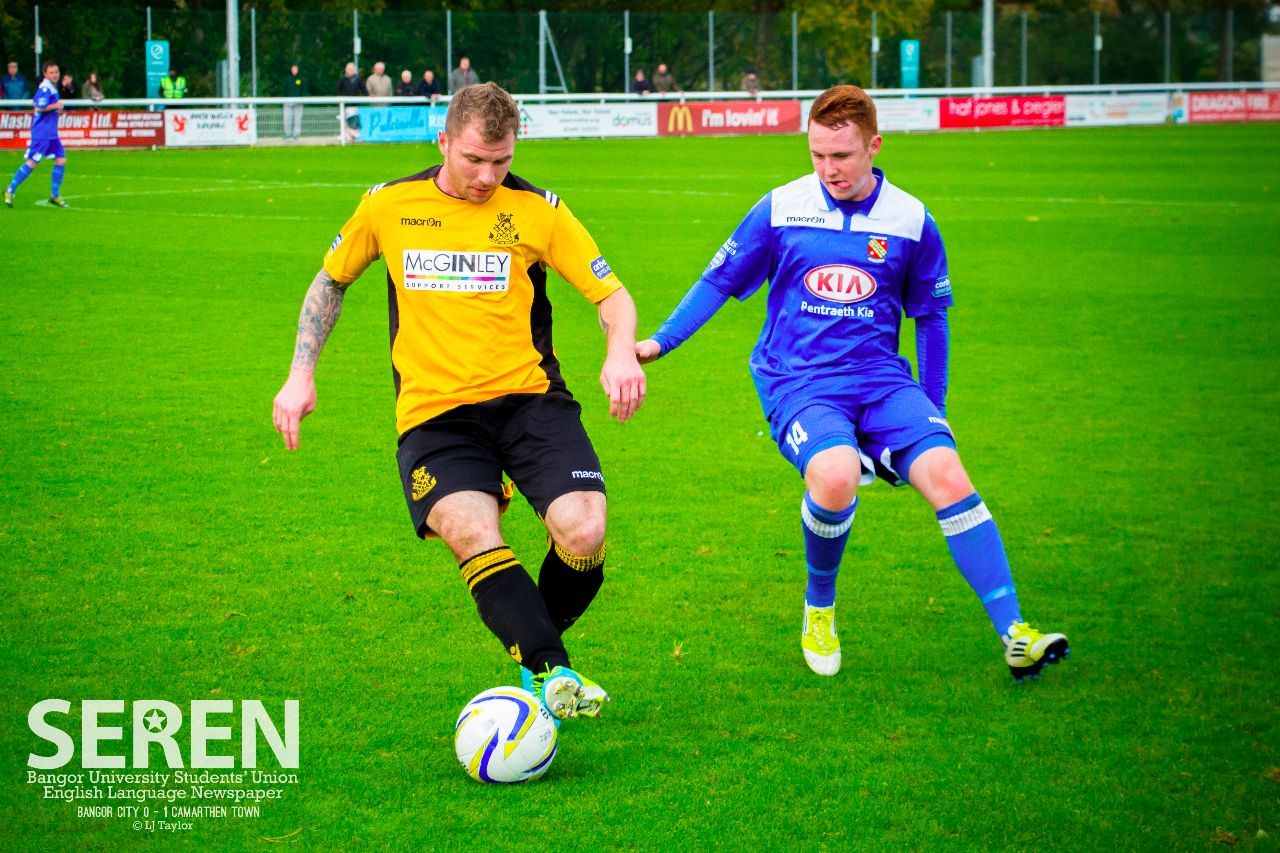 Despite a grueling afternoon battle Carmarthen Town manage to cling onto third place.

A 504 attendance made it to Nantporth this weekend with high hopes of Bangor City continuing their winning streak and snatching third place from Carmarthen Town this remembrance weekend.

It was a slow but promising start from the home side who dominated possession and had their fair share of chances but couldn’t quite convert.  In an unusual change from normal Bangor play, the action seemed to be coming from the right wing with Jamie Petrie and Declan Walker providing many of the chances instead of powerhouses Les Davies and Sion Edwards.

Perhaps City’s best chance in the first half came from a Chris Jones cross to Jamie Petrie but he couldn’t quite connect.

Chances were created from both sides towards the end of the first but rarely enough to threaten Idzi or Carmarthen counterpart Cann.

The second half began just as slow and the crowd became more and more focused on Carmarthen man Belle’s continued attack on City star Davies. Part way into the second half referee, Richard Harrington, finally succumbed and showed him the yellow though the big man refused to change his ways.

An hour passed before, in the 63rd minute, a Liam Thomas break saw him get past Miley and found him one on one with Bangor keeper Lee Idzi. In the one on one situation there was little hope for Idzi as Thomas easily knocked the ball past him into the back of the net: 1-0.

Bangor began to apply the pressure after conceding however none of their attempts were successful with a brilliant ball from captain Michael Johnston which found the head of Sion Edwards but narrowly missed the net.

Young Jamie McDaid replaced Chris Jones towards the end of the game and put in a great amount of effort but it just wasn’t Bangor’s day. Another great performance came from the left wing and Joe Culshaw who started Saturday’s match on the pitch rather than the bench.

It was a hard fought game, very different from Bangor’s terrific 4-1 win against Connah’s Quay, but the home side couldn’t quite scrap together enough to take Carmarthen’s third place spot.