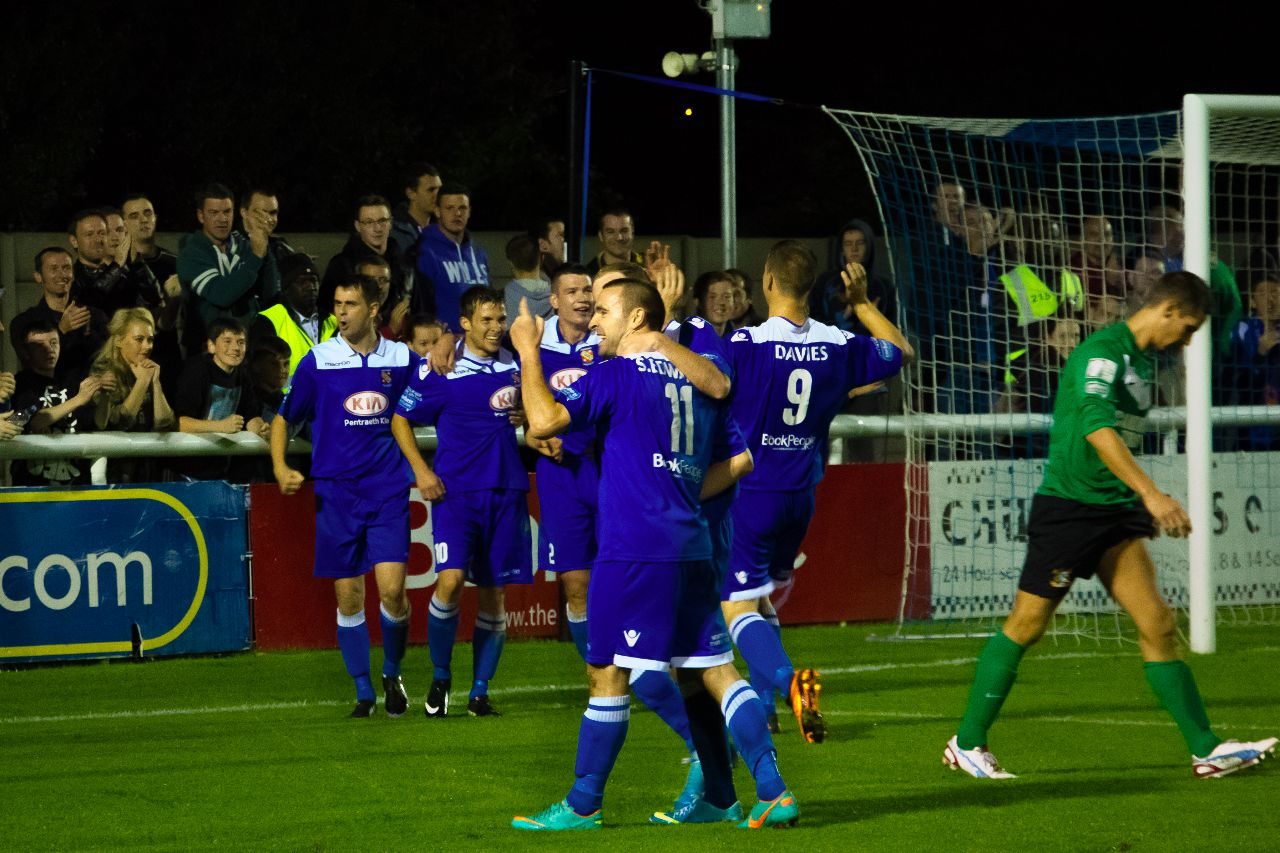 A thrilling 3-2 fight to the death gave Bangor’s faithful ‘citizens’ a lot to cheer for in their team’s first home win of the season.

Nev Powell’s youthful Bangor team piled on 90 minutes of pressure against a hungry Aberystwyth to gain their first home win of the season.

The first minutes of the match were promising with Bangor dominating possession and looking more confident than their opponents. City had the ball constantly in Aber’s half threatening their goal until things began to go wrong, starting with a yellow card for Bangor defender Joe Culshaw. On the 11 minute mark Lee Idzi was able to deflect an attempt on goal from Aber’s Mark Jones only for the ball to find it’s way to Chris Venables and from him into the back of the net.

Home team spirits lowered and Aber found kept a tight hold on possession. Tensions were high as Bangor started to regain possession only to have Robert Jones taken down in Town’s box only to have a goal kick awarded. Minutes later a corner taken by Sion Edwards gave Bangor a goal scoring opportunity back in Aber’s box and a handball went unnoticed by the referee much to the annoyance of the home side’s fans.

Following an Aber booking Bangor started to regain momentum with Edwards’ free kick saved by Mike Lewis only for the blues to continue their attack.

Fan favourite, Les Davies, found himself with the ball at his feet and took on three strong Aberystwyth tackles until he was head to head with Lewis. A powerful shot resulting in an equaliser and an eruption of cheers from the stands.

The second half started just as the first had, with Bangor claiming possession and they rarely looked ready to lose it, quickly regaining the majority of misjudged passes and wasted shots. Their 39 minute goal had given them the confidence boost they desperately needed to claim the three points.

Possession remained in Aber’s half with City on a relentless attack which saw a free kick given right on the edge of the box after a handball, though Bangor’s Declan Walker was unable to make anything of it. Sion Edwards put in a great performance on the left wing driving his team’s attack and narrowly missed a shot from outside the box.

Not long after though another great run from Edwards passed to Jamie Petrie gave Bangor the upper hand with their second and well deserved goal in the 64th minute.

The goal sparked even more energy and lust for goals from the home side and less than ten minutes later Chris Jones found himself alone in front of the keeper before calmly and confidently hitting home to give Bangor a 3-2 lead.

It was an excellent second half from City however the game was still far from over for Aberystwyth. An injury saw goalscorer, Jones, leave the pitch with John Owen taking his place.

Owen immediately got stuck into the game and found himself with a fantastic chance on goal but couldn’t quite convert.

In the dying minutes Aberyswyth found themselves dominating possession, hungry for goals. An excellent header from Wyn Thomas in the 86th minute gave the away side hope but despite a desperate scramble inches from the Bangor goal they couldn’t fight off their opponents.

The match was perhaps the most entertaining of Bangor’s season so far and the young team put everything to receive the three points and first home win of the season they were due.

If Nev Powell’s team continue on this form they’ll soon be crawling back up the Welsh Premier League Table.

Bangor travel to Camarthan on 12th October for their next game before returning to The Book People Stadium to face top of the league Airbus UK.