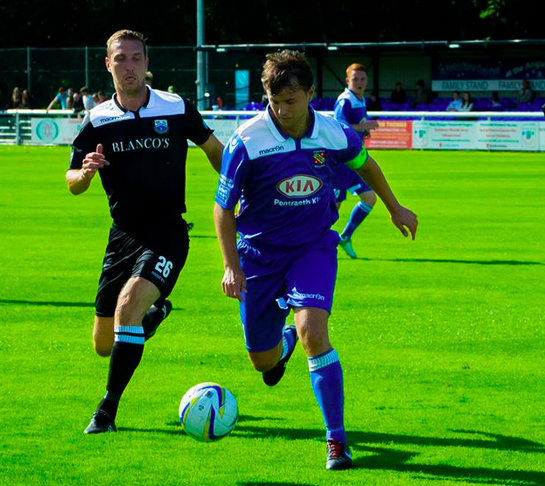 Despite a strong attacking force and domination of both halves, Bangor City had to settle for a draw Saturday afternoon with Port Talbot Town.

Nantporth was host to a crowd of 446 as the home side made their attempt to get the three points they desperately needed. However, things took a bad turn for Bangor before the game even began with defender, Chris Jones, injuring himself in the warmup. The team sheets were quickly amended and new signing, Joe Culshaw, started the match for City.

Bangor took control of the match straight away with a free kick and corner in the first five minutes but their early chances led to nothing. City pressure held strong throughout the first quarter of the match but, despite scrappy play, Port Talbot soon started hitting back.

An excellent break from Bangor’s Jamie Petrie provided them with their first real chance in the game but no goal was scored and play returned deep into Bangor’s half of the pitch.

Rhys Griffiths scored the first goal of the match with a penalty hit into the bottom right corner of the net, just beyond Bangor goalkeeper, Lee Idzi’s, reach, after a clumsy challenge in the penalty area.

1-0 down the home side started applying more pressure and after a Port Talbot slip-up Bangor captain, Michael Johnston, knocked the ball back down field and fan favourite, Les Davies, did the rest; 1-1.

Another mistake from Port Talbot saw a badly hit pass initiate a rush for the ball from their keeper and Bangor defender, Declan Walker. Walker managed to win the challenge but wasn’t able to get it into the box quick enough for Bangor to have a real chance and after an ugly, and disorganised, tussle the opportunity had passed.

Moments later Bangor hit the back of the net once more but the linesman had already called for offside. City were straight back with a strong attack and almost made it 2-1 when a lob with a lot of potential from Sion Edwards clipped the bar and was barely knocked out for a corner by Town’s keeper.

The second half began much as the first had, with possession going to Bangor who had found a renewed energy since the break. Port Talbot weren’t willing to just sit back and give the game to Bangor and managed to pull back a few lucky breaks but nothing enough to pose any serious threat.

Things started to get desperate with fouls from both sides and tension between the two sides high. A particularly nasty challenge from Port Talbot man Adie Harris on Rob Jones caused the referee to pull the Town player aside. No card was given though, a decision that didn’t go down well with the Bangor crowd.

A challenge on Culshaw saw him receive a blow to the head which took him off the pitch for a few minutes but the newcomer was soon straight back into the action, eager to prove his allegiance to supporters and teammates alike.

Both teams spent the last thirty minutes of the game pushing back and forth, each with a number of chances but never enough to get the win.

Bangor were plagued with yet another injury this time to forward Sion Edwards who was quickly substituted as Bangor tried to make the most of the dying minutes.

The home side kept up the momentum throughout most of the game and deserved another goal out of it but the 1-1 scoreline was a fair end to a fairly uneventful match.

The young Bangor team were hungry for the points and played well together, unfortunately it just wasn’t enough on this occasion. With one point in the bag though City are slowly coming closer to getting back up the table.

A visit to league champions New Saints next weekend is going to really test the team and their next home game will be against Aberystwyth Town on 4th October. Hopefully the blues will finally be able to give their faithful ‘citizens’ something to celebrate.