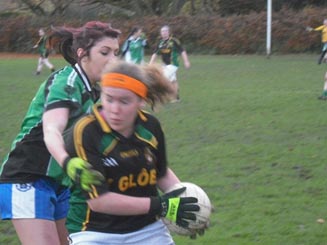 Bangor Ladies Women’s Gaelic Team has kicked off the season with three sensational wins including claiming victory at the annual nine a side tournament in Liverpool. This season welcomed an increasing number of new girls to the sport, with the majority openly proclaiming they had never heard of the sport let alone picked up a Gaelic football. Nonetheless the spirit and determination of the team could not be broken and has gone from strength to strength. A unanimous team effort combined with training twice a week on Ffriddoedd has provided a platform for the team to acquire the essential skills of the sport which have been demonstrated at a remarkably high level. This dedication and hard work have paid of dividends with the three consecutive victories in Liverpool and only two narrow defeats. This season has been a triumph for the team only to be sealed by recently securing a place in the championship final against Liverpool Hope on sun 2nd December. Bangor Ladies Women’s Gaelic Team are determined and focused as they move forward this year  and welcome any girls who are interested in exercising, meeting new people and having fun. Off the pitch the team take an active role in fundraising with the first Sunday of every month lending to their pub quiz and Bingo in Y Glôb in Upper Bangor. This semester has been as huge success for the team who are already looking forward to next year’s tournaments and fundraisers and welcome anyone interested in taking up the sport!!!