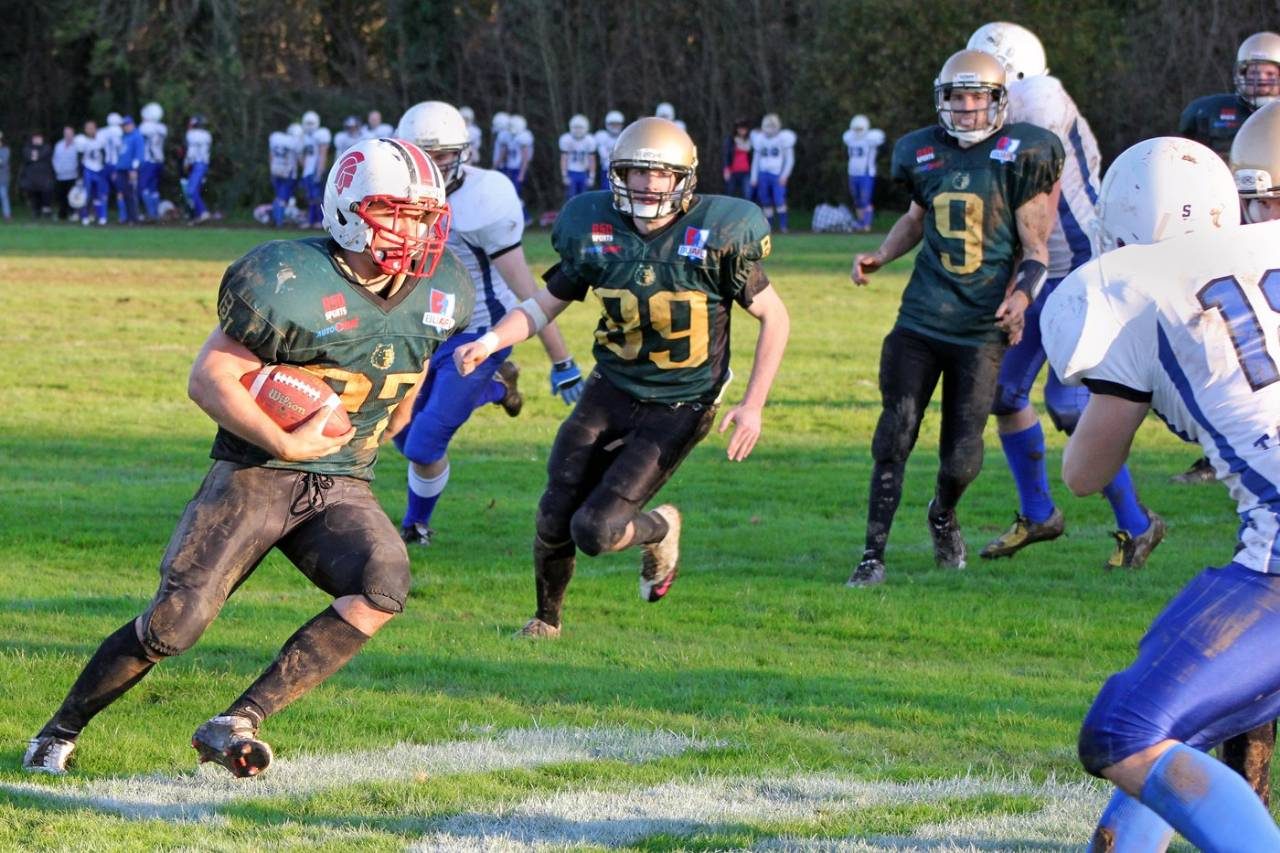 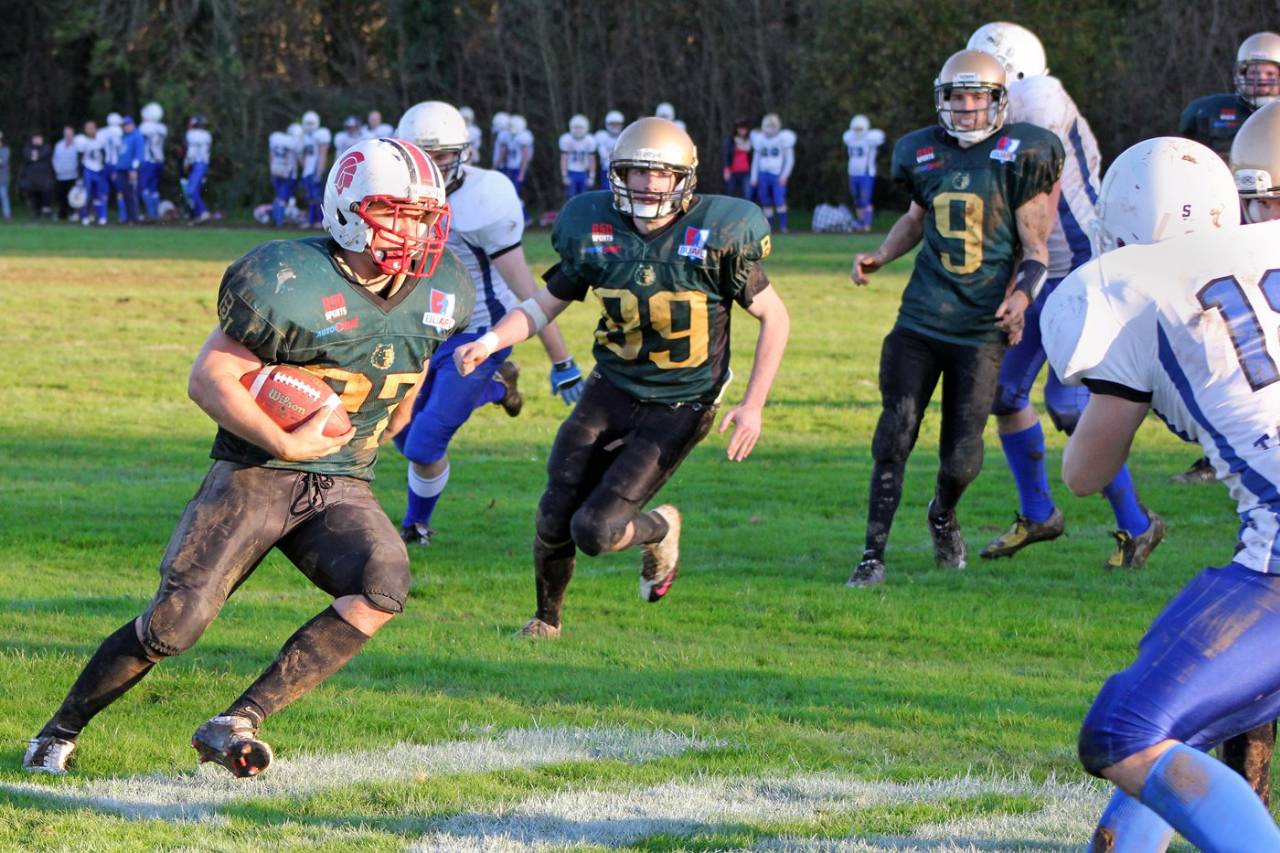 The Bangor MudDogs are the University’s American football team and 2011-12 was their third competitive season which they finished with a 5-3 winning record. This was a major step forward for the still relatively new AU club which is looking to improve on this in 2012-13.

The club has now gone through a full three cycle of development which has seen a huge change from the very first friendly in May 2009 which 15 players took on a squad of 40+ from the University of Manchester’s Tyrants. Bangor finished last season with typically over 45 players on the official roster for each game, a coaching infrastructure of eight staff, just lost out on making the national play-offs and was recognised the AU as its Team of the Year after also winning AU Varsity Team of the Year in 2010-11.

One of the highlights of the season was the season opener at home against varsity rivals Tarannau Aberystwyth who Bangor had played four times in the previous two seasons but had never beaten. Bangor had also not won a game during its two previous seasons so winning 39-0 in front of a huge home crowd on a full size and correctly marked pitch with proper posts from American was an amazing day for the club and an overdue reward for the longer-serving club members and supporters who had stuck with team through the darker years beforehand.

The club then had the rest of the Northern Conference paying attention by next two games with an 18-6 victory at home against the MMU Eagles and a 46-8 romp away at the Manchester Tyrants. An away fixture at the Sheffield Sabres for the third year running then saw Bangor lose 52-6 to the eventual conference runner up of the BUAFL’s Northern Conference in which the MudDogs played.

The new year saw Bangor lose 22-0 at home to Leeds Carnegie before travelling to Aberystwyth for a repeat of the season opener. This match was much closer with the scores tied at 20-20 at the end of normal time after the MudDogs dominated the first half but the Bangor offence broke the Aber hearts by scoring on the first play of overtime and the Bangor defence then denied Aber the chance to equalise on their next drive to give a relieved Bangor the season double over their rivals. 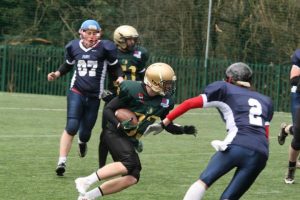 Poor weather had been a problem for pitch availability throughout the season and the club found itself at 4-2 in play-off contention with one weekend left in which to play two fixtures. A pitch wasn’t available in Bangor so a double header was arranged on a synthetic pitch in Manchester whereby the MudDogs played one extended half of football against the Huddersfield Hawks as one fixture and another half of football against Liverpool Fury for the other. The play-off hopes were crushed with a 17-0 loss to the Hawks who had changed tactics the week before to the infamous ‘Double Wing’ which the team hadn’t played against previously. Honour was restored with a 20-0 win against the Fury but the damage had been done and the dreams of play-off glory were dashed.

Preparing for the new season

The club is now preparing for the new 2012-13 season with the big difference being that the sport is now part of BUCS which will hopefully result in even more financial support for the game across Great Britain and has already made an impact for the club in Bangor. The club is looking for new players of all abilities and experience levels but we would particularly like to hear from anyone who is big and would like to be a lineman!

Want to watch the NFL in Bangor?

The club’s social activities have always focused on getting together to watch live NFL games from American on Sunday evenings and the club is pleased to announce a partnership this year with Varsity on the High Street in Bangor. Live games on Sky Sports will be shown there from 6pm – midnight (UK time!) in a dedicated viewing area for football fans so, regardless of whether you follow the MudDogs or not, Varsity is the place to watch the sport on a Sunday evening.

There will also be a Superbowl party on the night of Sunday 3rd February starting at around 11pm and going through till about 4am when the game finishes.

Contacting or finding our more about the Bangor MudDogs