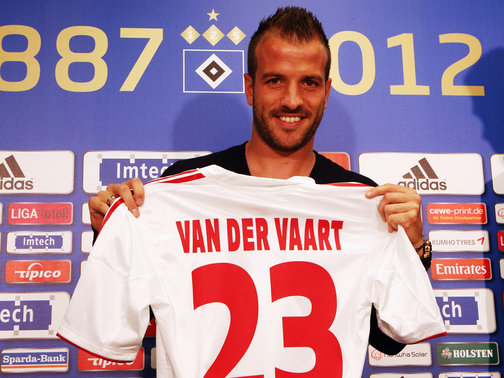 After just two seasons at Tottenham, Rafael Van Der Vaart returns to Hamburg for a fee of €13 million.

Van Der Vaart’s transfer to Hamburg sees his return to the club after his departure in 2008 where he made over 90 appearances and scored 39 goals.

“Its official! Welcome home, Rafael Van Der Vaart” tweeted the club from its official Twitter when the deal was confirmed yesterday.  The tweet was also sent with a picture of the 29 year old with his new number 23 Hamburg shirt.

The Dutchman has signed a three-year deal with the struggling German club to which his return has been received positively.

I am delighted that Rafael Van Der Vaart will be playing for Hamburg again.” Hamburg coach Thorsten Fink, whose own future with the club is uncertain, said about the transfer.

Van Der Vaart confirmed the move yesterday on his Twitter when he tweeted: “Its official, I am back in Germany! Looking forward to great years with HSV!”

The Dutchman then went on to admit he was sad to leave Spurs and to thank all the English fans for all the support.

Part of the deal to sign Van Der Vaart to Hamburg was reportedly funded by a local investor and is hopefully what the Budesliga team need to avoid the relegation they so narrowly missed last season. The investor, Klaus-Michael Kuhne, who also contributed to some of the German teams other summer signings, gave the club an interest-free loan which allowed them to complete the deal with Tottentham Hotspur.

The 29 year old, Dutch midfielder, joined Spurs back in 2010 on the closing hours of deadline day for a bargain fee of £8 million from Real Madrid. The player was grabbed by Tottenham after a rumoured £18 million transfer to Bayern Munich had fallen through the day before.

His departure from Spurs is not a complete surprise as recently he has rarely played club football, a fact that has had him dropped from the Dutch International team’s upcoming World Cup qualifiers. At Tottenham he struggled to find his place in the team, much like at the already star studded Real Madrid. No doubt he will become a regular back in Hamburg and could potentially see out the rest of his career with the German club.

Van Der Vaart isn’t the only Dutch star to have seen a change in kit with the deadline of the transfer window yesterday. Just two weeks ago we reported on Robin Van Persie’s £22 million move from Arsenal to Manchester United.

Ibrahim Afellay, another Dutch first teamer, also made a change. The 26 year old striker has been loaned out by Barcelona, where he had been struggling to get a starting role in the team to join German team FC Shalke. The player was happy with the loan after talking with Barcelona boss about how to better his career. Afellay believes, along with Barcelona, that being loaned out to Shalke will give him more playing time and improve him as a player.