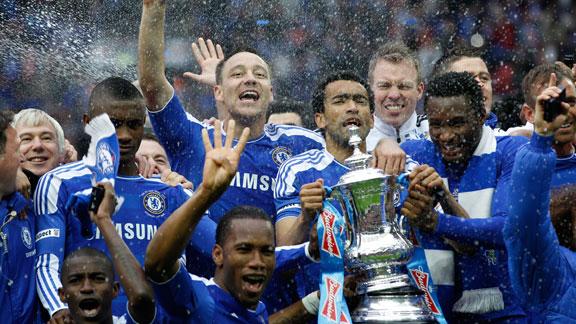 The 5th of May was a blue day at Wembley Stadium as Chelsea left the F.A Cup final with the trophy in their hands. The game began with 85million pounds worth of goal scoring talent on the bench as both Andy Carroll and Fernando Torres failed to make the starting line ups. The latter was not missed. With just 11 minutes on the clock, Jay Spearing’s inability to control the ball led to Juan Mata seizing possession. With Liverpool on the back-foot he swept a ball through to the galloping Ramires who outpaced Jose Enrique to fire the ball past Pepe Reina at his near post, both of whom will be disappointed with their part in the goal.

Liverpool responded well to the goal as they got their first real grip on possession. They were nearly level just two minutes later when Craig Bellamy smashed a volley against Branislav Ivanovich in the Chelsea penalty area. The longer the game went on the more comfortable the London side looked as the reds failed to bring Suarez into the game, the Uruguayan too often isolated against the blues back four.

Frank Lampard escaped Jay Spearing far too easily before slipping the ball to Drogba in the Liverpool penalty area and the big Ivorian swept a left foot shot past the Liverpool ‘keeper’. It was the Strikers fourth F.A Cup final goal in as many games.

Dalglish had to make a change. The struggling Jay Spearing was replaced by Andy Carroll; he made an instant impact. Just ten minutes after his introduction to the game Carroll was on the scoresheet. Stewart Downing’s persistence paid off as his block on a Bosingwa found its way to Carroll deep inside the Chelsea penalty area. Liverpool’s number nine twisted and turned to gain half a yard on John Terry before firing a shot past Petr Cech in the Chelsea goal. Liverpool began to dominate.

At 2-1 Chelsea began to become nervy and tired as the newly inspired Liverpool side pressed relentlessly for the remaining half hour. Finally the ball was sticking as Andy Carroll caught everything thrown at him.

The thirty-five million pound man nearly became the hero in the 81st minute. A lovely clipped ball from Suarez found Carroll looming at the far post and his header was brilliantly saved by Petr Cech, a save that is sure to become one of the iconic moments of the F.A Cup’s history. With some Liverpool players claiming the ball crossed the line, perhaps it will be one of the Cup’s most controversial moments too.

Chelsea held out to win their 7th F.A Cup. As John Terry became the captain to lift the trophy the most times in the modern era, Chelsea’s attention now turns to Munich and the Allianz Arena for the Champions League Final on May 19th. For Liverpool a disappointing season ends on a sour note, despite hammering Chelsea 4-1 at Anfield mere days after losing to them in the cup final. Both teams will know a Cup win may not be sufficient success in the next campaign.