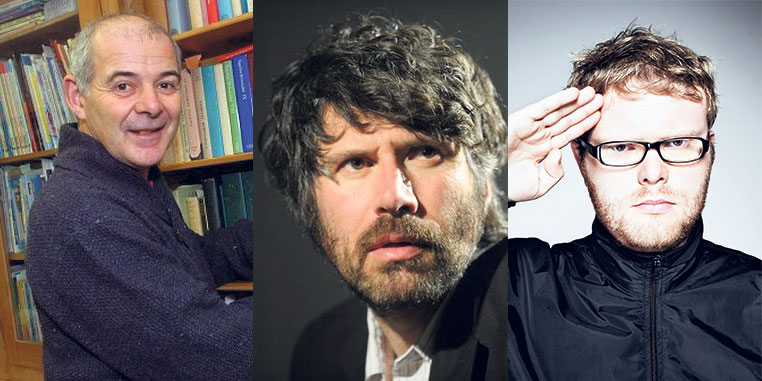 In the coming Graduation Week, musician Gruff Rhys and DJ Huw Stephens will be honoured for their contributions to music and the arts by Bangor University. The Honorary Fellowships will be awarded during ceremonies across 11th-17th July.

Gruff Rhys, both a solo artist and member of Super Furry Animals, recently supplied the scores to Dylan Thomas biopic Set Fire to the Stars and American Interior, his own pursuit of 18th century Welsh explorer John Evans. The book of the latter has made him a Welsh Book of the Year nominee, while album Hotel Shampoo and collaboration Neon Neon have won music prizes respectively.

Huw Stephens, the youngest DJ to ever work at BBC Radio 1 and co-host of BBC Radio Cymru’s C2, is a writer and broadcaster and founded and curated Cardiff Swn, a contemporary music festival. He is to be awarded for his services to the Welsh music industry.

Vice-Chancellor Professor John C Hughes had the following to say:

Bangor University has achieved great results in several areas this last academic year: the University has been ranked in the top 100 Universities in the world for its international outlook, and rated in the top 20 in the UK for student experience in addition to having achieved excellent results in the Research Assessment Exercise. As we celebrate the success of our students and of the University, it’s also an honour to also highlight and reward others connected with Wales or the University who are excelling in their own chosen fields, and making a valued contribution.

Several Bangor alumni are also being honoured. Recent Bangor University retiree Dr David Roberts, who worked at the university for 35 years as a registrar, is to be awarded for his services to the institution. Dr Roberts lives locally and is the author of Bangor University 1884-2009. Bernard Taylor CBE, who is the Chairman of Cambridge Laboratories Ltd and was Chief Executive of Glaxo Worldwide, will be honoured for his contributions to pharmaceutical science.

Bangor graduate Shireen Chambers, Executive and Technical Director of the Institute of Chartered Foresters, will be awarded an Honorary Fellowship for her services for ecology and forestry. Another Bangor graduate, Jeremy Howell, is a professor at the exclusive University of San Francisco and will be receiving an Honorary Fellowship for his contributions to Sport Science.