The School of Law was last week forced to apologise to and reschedule the exams of hundreds of students.

This comes after two law exams had to be abandoned forty minutes in, due to the noise being created by two pigeons.

“They were on top of the organs in the back of the room and would not just shut up. I guess a few people complained and then they ended the exam” said Kyle Gauvin, an Exchange Student from the University of Maine, who was there for the International Law of Human Rights exam.

It is believed that the pigeons got into PJ Hall through two missing window panes.

“Knowing that I am leaving tomorrow morning and am not sure or even if I will be able to sit the exam makes it worse. It would make sense to try and stay for the exam, but not at the cost of making completely new arrangements for flights and trains for tomorrow. Hopefully there will be some way that I can take it when I get back state side, but as long as there is no extra cost to me” worried Kyle at the time.

The University was quite quick to respond, releasing a statement to Seren:

“First year and third year students following modules in Public Law and International Law were those mainly affected. Bangor University have apologised to the students concerned and in addition to rescheduling the exams, have assured students that they will not be disadvantaged as a result of this disruption” it said.

Bangor Students’ Union worked closely with the university to ensure that minimum disruption was caused and played a part in confirming arrangements. A rescheduled exam will take place on 30th May and will use a ‘seen’ paper format.

“The School of Law is aware that there have been some rumours that the papers will be marked more ‘harshly,’ but we can confirm that this is not the case. In addition, the School of Law Examination Board will fully take all the relevant circumstances into account in its deliberations following the end of the examination period” said Dr Osian Rees, Examinations Officer for the School of Law.

224 students were affected by the cancellation, including some from the School of Modern Languages, who were able to be moved to MALT to continue their exam. Some of those affected include international students who expressed worries resitting the exam due to prescheduled flights home.

“Knowing the fact that the university is in the examination season, they should take precautions in case such events occur. They have still not decided when the exams are going to be rescheduled, which is a paramount factor for many internationals like us, who have booked their flights to go back home” he said.

The Law School and the university have since proposed solutions to these issues.

“I am very happy with the university’s response to this problem. The fact that the university considered the problems of international students as a main priority, and have come up with various alternatives for the convenience of students. The university and law school has taken all possible steps for the benefit of students” Varun stated.

For those unable to attend the resit on 30th May, the School of Law is prepared to make alternative arrangements;

“Students have been informed that if they cannot sit the rescheduled examination, they should contact the School of Law as soon as possible so that alternative arrangements can be made. The School will endeavour to be as flexible as possible in this respect, and options include sitting the paper on a different date, or making arrangements for students to sit the paper at an alternative venue, for example at an institution in their home country” said Dr Rees.

The School of Law have also confirmed arrangements for those who weren’t able to complete the exam due to being in different locations, such as the sick bay students and those with special circumstances.

Whilst a serious issue for those involved, some have seen a funny side to it, with a Bangor Pigeon Twitter account appearing after the news first broke. In the last week not only has the pigeon story been picked up by news publications such as The Independent and The Huffington Post, but now the story has gone international, appearing on French news site 20 Minutes. 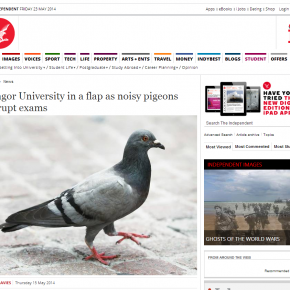 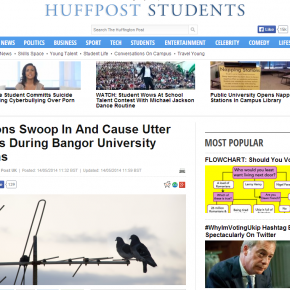 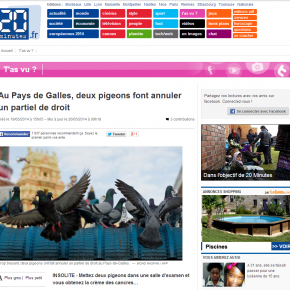