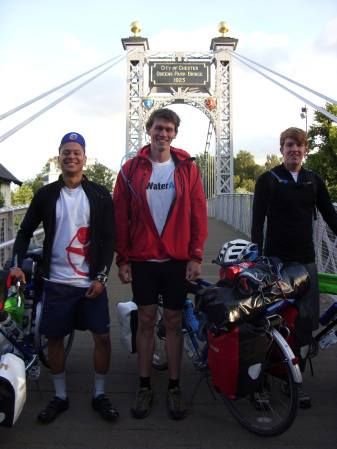 A Bangor University graduate has set off on a 3-year journey around the world for charity by bicycle.

Mark Phillips, 22, who has just graduated from Bangor with a Masters degree in Chemistry, started to plan the mammoth trip two years ago with fellow cyclists and friends Russell Selby, 22, and Jacob Mellor, 22.

While the trip wasn’t originally set out as a three year journey, the three lads are happy with the extension.

Russell said of the lengthy trip: “If we’re going to do such a long journey, why not keep going? This way we’ll see the change in landscape and culture as we travel through the countries. We’ll get to see the places that the tourists don’t get to.”

This isn’t the first time that the trio have travelled. They have also travelled around Eastern Europe on holiday, which is where the idea for this trip around the world took root.

“That trip was a real eye-opener,” Mark revealed.

Now the three are off on a world-wide adventure via bicycle – a nice and cheap method – and all for charity.

“We were always going to travel, and thought that this trip provided a great opportunity to fundraise for charity,” Russell said.

Calling their trip the “Wonders of the World Charity Cycle”, the money that the lads raise will be donated to four charities: Cancer Research, Kidneys for Life, Water Aid and Save the Children. So far, they have managed to raise £1000, only just having started their journey at the end of August.

Funding the journey themselves, the trio are going to be travelling in an easterly fashion, through Europe, the Middle East, Far East Asia, Australia, and then island hopping to the USA.

“Our route has been determined by the Wonders of the World, hence the name of the trip, and the plan is to see as many of them as possible via bikes. The route so far has us being seeing seventy-eight at the moment,” Jacob said, “but’s it’s a flexible plan, so we’ll try and see as many of these unbelievable wonders as possible.”

Setting themselves rules such as not cycling in the rain and making they sure they have ten day breaks in between each cycle to ensure the journey is enjoyable and can be appreciated, Mark, Russell and Jacob plan to finish their cycle in New York by 2016.

“Our families will come out and visit us throughout our travels, and we’ll keep in touch with home via Skype, Facebook and email. Everyone’s support has been great, we really appreciate it.”

To keep people up-to-date on their journey, the lads have set up a Facebook page (https://www.facebook.com/WondersOfTheWorldCharityCycle), and a website (http://cyclewondersoftheworld.wordpress.com/), which has a section on how people can donate.