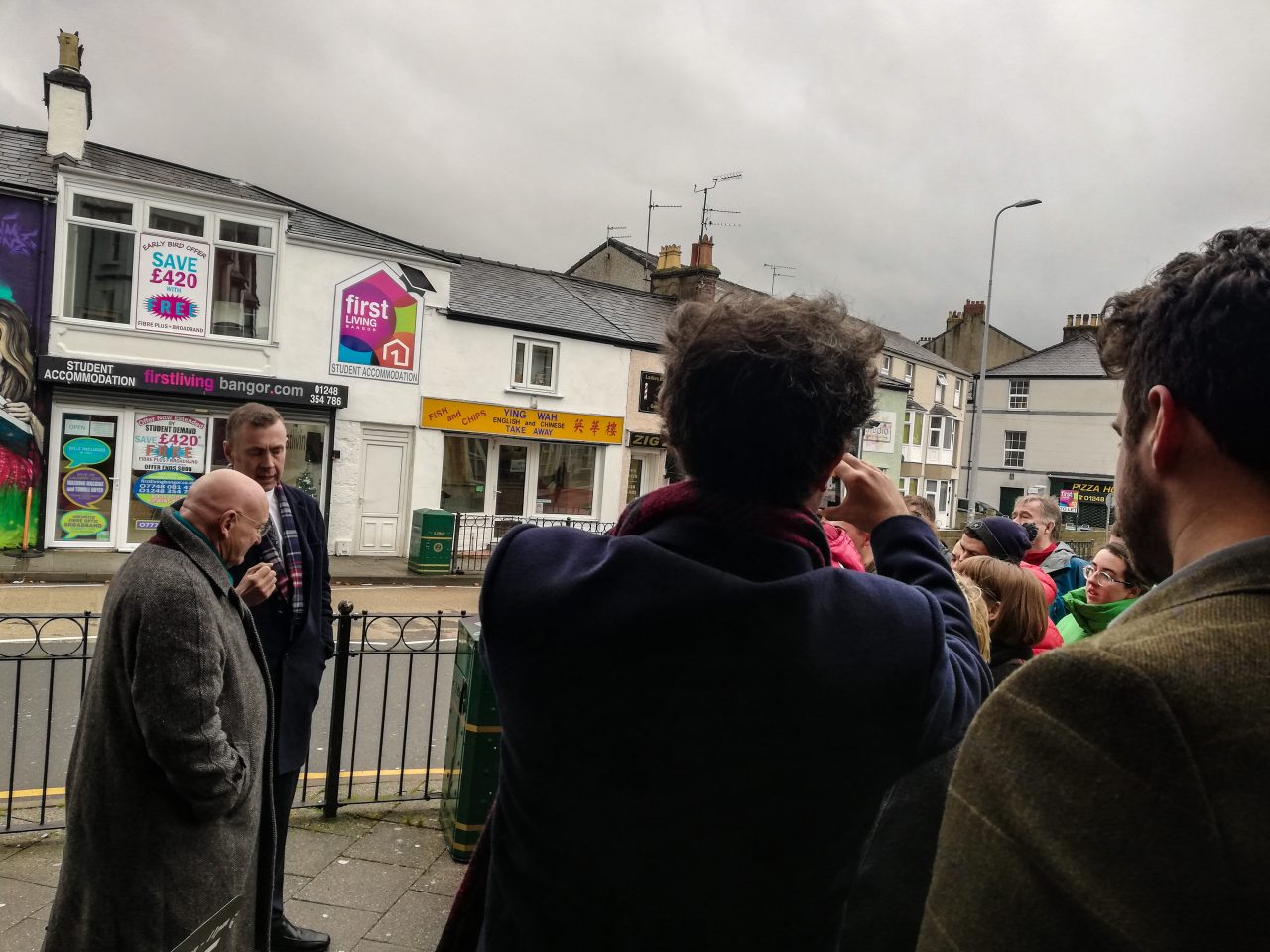 The Leader of Plaid Cymru has visited Bangor today to promote the party as the General Election approaches.

The Arfon constituency is one of the most marginal seats in Wales, with the seat having been last won by only 92 votes for Plaid Cymru.

The leader took part last Sunday in an ITV election debate which had him question Labour on why it didn’t deliver in Wales what it promises in Westminster.

Talking to Y Seren about the role Plaid Cymru can play for Bangor students, Price said:

“Clearly for us, we want to have a transformational program for Wales and create a better future for all people living and studying in Wales. Specifically, in terms of students here, as a point of principle, we believe that education should be a right and not a privilege.

“Getting rid of tuition fees would be absolutely a key proposition for us at Westminster, and we would like to see that followed though in Wales.

“We want to see investment in the education system, at every level and including the HE sector in Wales, which has been underinvested in over many years. We believe investment in education is the best investment possible, in terms of the economic development of a country, because the skills and talents of our people are the key driver in determining economic success.

“We’ve got exciting plans for Wales: we think we have the opportunity to be at the ground level of the Green jobs Revolution; Wales is very fortunate to have fantastic natural resources in terms of renewable energy. We want to be taking advantage of that by investing in national energy companies based here in the north-west of Wales; investing in an R’n’D program, in a manufacturing supply chain creating high paying jobs.

“Ultimately, we want to see more investment going into basic infrastructure for the 21st Century. I’ve just come up from the train from Cardiff; it’s ridiculous that at the moment we can’t travel within Wales, so we want to create a western link, a trans-Wales railway, linking Bangor with Caernarfon, all the way down to Carmarthen and Swansea, so we’ve got that rail corridor, which would also be a knowledge corridor, because along that line you’ve got several universities.

“We’re very keen that people who come to study in Bangor stay in Bangor, we don’t want the talent that comes here to leave. We want to invest into creating high-value economic opportunities, and also creating connectivity, not just transport but also gigabit broadband starting in rural Wales rather than the opposite way.”

When asked about what Plaid Cymru would do on Brexit, the leader replied: “First of all, we are Wales’ Pro-Remain leading party. We want to remain in the European Union, and we have the opportunity in the next few days to achieve that. We see in Wales, which voted marginally to leave, the strongest shift of any Leave area in the UK. I think Wales is a Remain nation now, and I think we see that in the rising support of Plaid Cymru as well. In many parts of Wales including this constituency, we’ve entered into a Remain alliance with other pro-Remain parties, the Green Party and the Liberal Democrats.

“What we need to do now is to maximise the number of MPs from pro-remain parties; we can’t include sadly the Labour Party in that, as they say they are between Remain and Leave at a UK level. I’m hopeful; I think we can get that strong third bloc of MPs and not from Labour or the Conservatives. If we get that third bloc, we can block a No-Deal Brexit, we can block a Labour or a Conservative Brexit by ensuring we get a referendum and winning it; to win the referendum it’s very important that we elect as many passionate and clear pro-remain party MPs as possible.

“We won’t get that leadership sadly from the Labour Party, it seems, so we need to make sure that the Pro-Remain voice there is strong in Parliament, and we are confident that we will get the strongest number ever of Plaid Cymru MPs, and a large part of that is because pro-Remain voters are coming over and voting Plaid Cymru for the first time.”

Adam Price took over the leadership of Plaid Cymru in 2018. He is the AM for Carmarthen East and Dinefwr, having previously been an MP for the constituency with the same name.

He studied at Cardiff University, obtaining a degree in European Community Studies. He also went to Harvard University on a Fulbright scholarship.