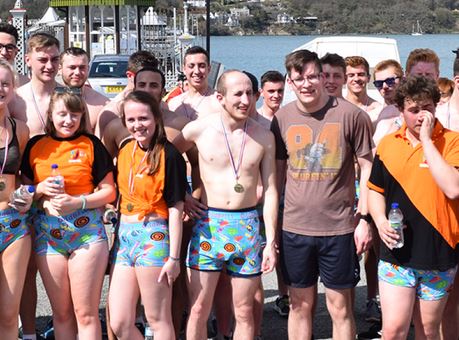 Bangor ‘Runderpants’ returns for a second year, with the organisers promising it’s going to be even bigger and better this year.

The event is being organised by Bangor University’s RAG (Raising and Giving_ and involves a one mile run in their underwear, or over their clothes, to raise money for Nerve Tumours UK, who support people who have Neurofibromatosis, a genetic disorder that causes tumours to develop anywhere in the nervous system, including the brain, spinal cord and nerves.

Taking place on 30th March, the charity run starts at Porth Penhryn, down Beach Road and ending at Bangor Pier.

After the charity run the Tap And Spile will be hosting a barbecue and there will later be an event at Academi.

The fun run is also aimed at promoting ‘body positivity’ to show that anyone and everyone can cover the distance regardless of the time it takes and that anyone can look great in underwear.

Registration for the event costs students £5 and this gets them a free pair of underpants courtesy of ‘Oddballs’ the charity raising money and promoting awareness of testicular cancer.

Each runner also has their own fundraising page to raise even more money for the charity.

Bangor RAG members spend the year raising money for charity by any means possible and is a great project for those students who wish to volunteer on a one-off basis or all year round.