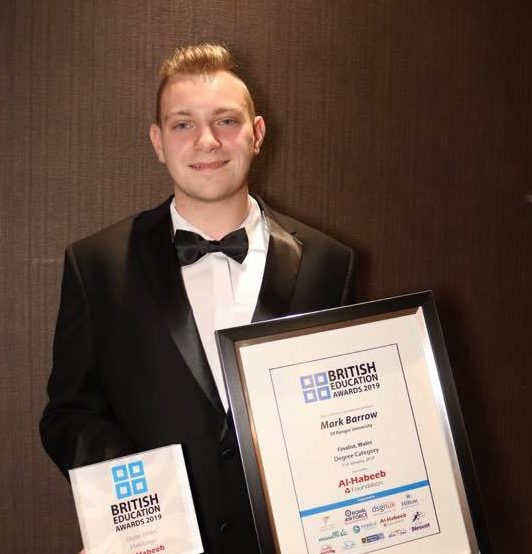 For the second year in a row, a Bangor graduate has won a British Education Award.

Mark Barrow, who graduated from Bangor University earlier this year, won the Wales Graduate category of these increasingly prestigious awards, which celebrate individuals who have excelled within the UK education system.

Mark Barrow from Saddleworth, Oldham, graduated with a First Class Honours degree in History with Journalism, attaining a mark of 84%.

Mark, received his Award at a Ceremony at the Hilton Hotel in Manchester. Mark follows Bangor graduate Maisie Prior who won last year’s Higher Education category.

He said: “I am naturally delighted to have won the award. Just being nominated for national recognition feels unbelievable, but to have also won the award is fantastic, and something I could not have expected. It just goes to show that Bangor University excels in providing students with a top class education experience. I couldn’t have done it without all the support and guidance I have received from the University. I’d also like to say a massive thank you to Dr Nikolaos Papadogiannis who nominated me. It is great for me to still be heavily involved in the University, as I am really enjoying my role as Education Sabbatical Officer at Undeb Bangor.’

The student, came top of his year at Bangor University, and won the Dr John Robert Jones Prize, awarded annually to the best students across all disciplines a the University.

“Mark was an exceptional student and his performance in all the modules he has attended was outstanding.

He won three academic awards at his graduation. In addition to the overall Prize, he won awards for the highest Dissertation score within the School and the highest overall score. Moreover, Mark was outstanding in terms of his collaboration with his fellow students: he was among the students who treated the viewpoints of others with respect, even when he disagreed. He actually encouraged other students to participate.”

Twenty-two year old Mark is currently the University’s Students’ Union Vice-President for Education. He said of his time as a student:

“The School where I studied was excellent. Pastoral support was better than you’d expect, with academics always being on hand to help, support and provide guidance to students.

“I really enjoyed my course here. There has been a diverse range of modules and assessments, and that is so vital in terms of gaining experience of transferable skills.”

Asked about his future, he said:

“I’m hoping to continue in education, and develop a career in academia. I’d also like to go into politics eventually!”

Mark chose to study at Bangor University as it was one of only a few institutions to offer the course he wanted.  He added:

“Students get to know their lecturers on first name terms, due to the ‘community feel’ of Bangor, and because we are a medium sized University.”

“Being an outdoors person, there was only one destination for me. North Wales is an amazing area to be a student, and I wouldn’t change the experience I’ve had here.

Mark is enjoying his current challenges as Vice President for Education at the University’s Students Union where he represents students’ academic views and interests and works with the University to make positive change for students.