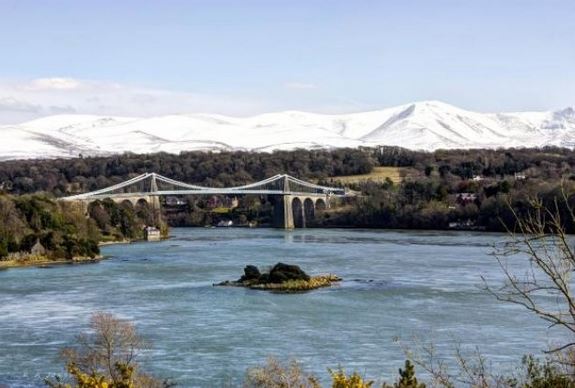 The proposal of building a new tunnel under the Menai Strait to carry electric cables from Wylfa
Newydd nuclear plant, has potential to give geologists the opportunity to study ancient rock
formations on the bed of the Strait.
The new tunnel, which could be opened in the mid-2020s, would see cables laid to carry energy from
Wylfa Newydd to the mainland.
Dr Mike Roberts, from Bangor University’s School of Ocean Sciences, told ‘Good Morning Wales’
listeners how geology and marine geology surveyors are benefiting from samples from under the
Menai Strait.
Drilling by National Grid has gone 50m into the sea bed and seen samples of rock brought up from
under the straits. Geologists believe the rocks will be able to tell a story of the movement of land
which was once south of the equator.
“The National Grid are drilling holes in the Menai Strait, giving us a unique opportunity to take
physical samples we wouldn’t normally see, rather than using remote sensors.” He explained.
“These rocks there are 300 million years old and some much older than that. We know there are a
sequence of rocks from about the time coal was being formed, which is hugely important. It will be
really interesting to look at them in more detail.”
It has been suggested that the cables from Wylfa Newydd could be included in the proposed third
Menai Bridge crossing, but Aled Rowlands of the National Grid said:
“As things stand right now, the only way we can be sure to connect Wylfa Newydd into the electrical
transmission system and to the people and businesses that need it is to develop a tunnel.”