Bangor March To Reclaim The Night 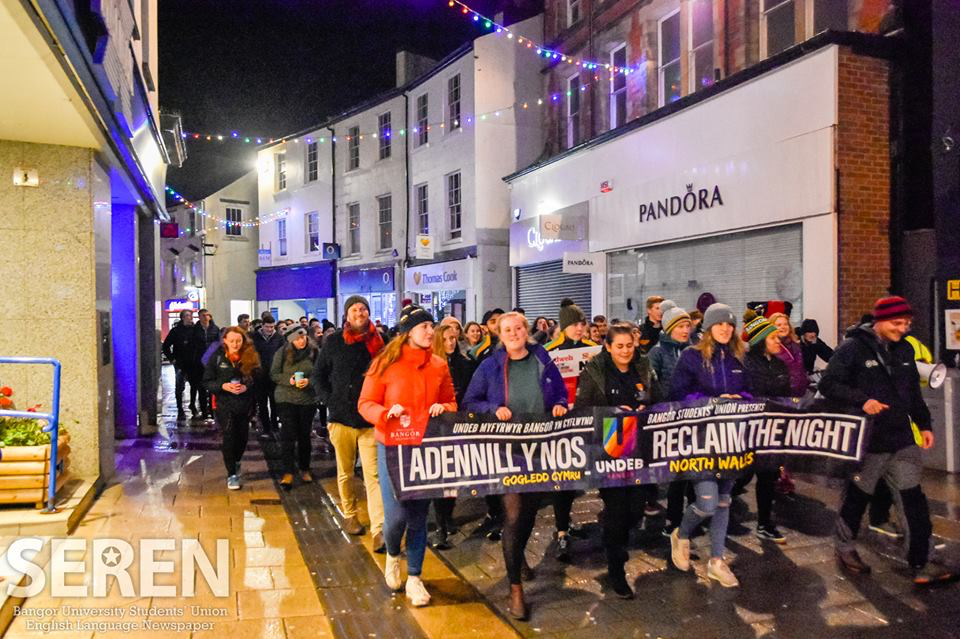 Over one hundred students attended Reclaim The Night – a peaceful march in protest of sexual violence which took place on November 29th.

The march, organised by Bangor University Students’ Union (Undeb Bangor), started at Bangor Clock Tower and continued through the high street before ending at Pontio Arts and Innovation Centre.

It was Bangor’s first Reclaim The Night event since April 2016 and is a part of Undeb Bangor’s campaign against sexual violence, which aims to clearly communicate the definition of sexual violence to students.

Mark Barrow, Undeb Bangor’s Vice-President for Education, was a leading figure behind the planning of the march.

After the march, he said: “You’re never really sure, especially with the weather, how many people would come along. But I’m really happy with the turnout, so thank you to everybody that came.”

He added: “It’s been a long time coming. So it’s been great to see so many people tonight. Hopefully it’s made a big impact and got people talking about the issue.

“I want people to take away that it’s an ongoing battle and that it can happen to anybody. But, particularly, 16-19 year old females are the most likely to be effected.”

Although self-defining women led the march, the event was open to everyone, and was fully inclusive.

Reclaim the Night began in Leeds, in 1977, as a response to women in West Yorkshire being advised to stay indoors, due to murders carried out by the ‘Yorkshire Ripper’.

The march exists to demand justice for victims of rape and sexual assault. It will state that women should be able to walk the streets at night, without fear or reality of violence. Such marches thereby give women a chance to reclaim the streets of their towns and cities.

Undeb Bangor vows to continue raising awareness about sexual violence after the current campaign has finished.

“There is no grey area. The university has a zero tolerance policy on sexual violence so it’s important that people know there’s help out there,” said Mark Barrow, VP Education.

“Don’t give up. Keep fighting. We are making a stand to work towards making sure that people aren’t affected by sexual violence going forward.”

Students who may be affected by any of the issues raised in this article can contact Student Services for confidential advice and guidance.