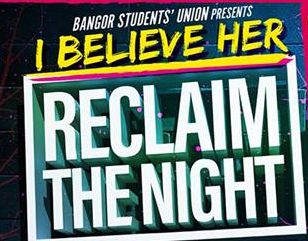 Join Bangor University’s Students’ Union, Undeb Bangor, for a peaceful march in protest of violence directed at women, on 29 November 2018.

Reclaim the Night is an international campaign, when people take to the streets to say NO to sexual violence against women, street harassment, rape culture and victim blaming.

The event will begin at the Clock Tower, in Bangor City Centre, at 6.30pm. There will be a selection of rousing speeches, before the march heads along the High Street towards the Pontio Arts and Innovation Centre.

Although self-defining women will lead the march, the event is open to everyone, and is fully inclusive. The route is fully accessible to wheelchair users.

There will be a placard-making event the previous evening, Wednesday 28 November, at 7pm. This will be held in the Students’ Union, which can be found on the fourth floor of the Pontio building.

The march exists to demand justice for victims of rape and sexual assault. It will state that women should be able to walk the streets at night, without fear or reality of violence. Such marches thereby give women a chance to reclaim the streets of their towns and cities.

Reclaim the Night began in Leeds, in 1977, as a response to women in West Yorkshire being advised to stay indoors, due to murders carried out by the ‘Yorkshire Ripper’.

Bangor’s Reclaim the Night march is part of Undeb Bangor’s Sexual Harassment prevention campaign, ‘No means No’, which begins on 26 November.

It will be Bangor’s first Reclaim the Night event since April 2016.

Mark Barrow, Undeb Bangor’s Vice President for Education, said: ‘’It is very important that we organise a Reclaim the Night event, and I hope there will be a strong turn out from students, and members of the local community.

‘’Nobody should be made to feel afraid when walking the streets at night, and these marches visibly convey that message.’’