Alex Jones: The Truth Behind InfoWars 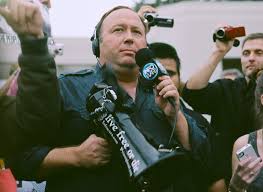 Alex Jones; the chaotic man we always see making headline news and no one is entirely sure why. With his outrageous scaremongering and absurd claims about tap water making frogs gay, it can be difficult to believe that he has any real leverage in influencing people’s political views. However, he has a core following of an estimated 6 million people, awarding him a primary position in many people’s news intake. One of those viewers, shockingly enough, is Donald Trump. Trump has outwardly praised Jones and his news outlet InfoWars, retweeted Jones’ tweets, and even appeared on the show prior to winning the 2016 presidential election.

However, the justification Jones uses to defend his outrageous political views does not coincide with the content of his air time. In any of Jones’ standard four-hour talks, approximately a quarter of that time is spent promoting the products being sold on his InfoWars website. These products directly coincide with the conspiracies he pushes in his segments, making the motives behind his beliefs questionable at the least. The incentive for marketing these products is a strong one as well; approximately two thirds of his funding comes from viewers purchasing his products.

To his viewers, Jones consistently makes claims that the cost of producing InfoWars is near 45 to 50 million dollars a year. Jones also regularly regards the fact that nearly every penny that is donated or earned gets put directly into improving the production of the show, and that income is scarce enough that the show may get shut down. Yet when looking deeper into the InfoWars empire, it is found that Jones scarcely advertises anything other than his products, does not put adverts on his YouTube videos, and his subscription services consist of unadvertised videos that can be found on YouTube. These facts shed doubt on the legitimacy of the state Jones claims his empire is in, especially given the monetary figures Jones provides and the high level of wealth he embodies.

The fact of the matter is, as successful of a conspirator that Alex Jones is, his profits and the success of his show are not due to his sheer talent, but instead his business model. With every inflammatory comment, fearful viewers get coerced into believing in the legitimacy of his claims, and Alex Jones promptly sells them the answer. In an age where fake news is more widespread than ever and conspirators to the likes of Alex Jones are unjustifiably respected, it is pivotal to remember to differentiate between manipulation and fact.