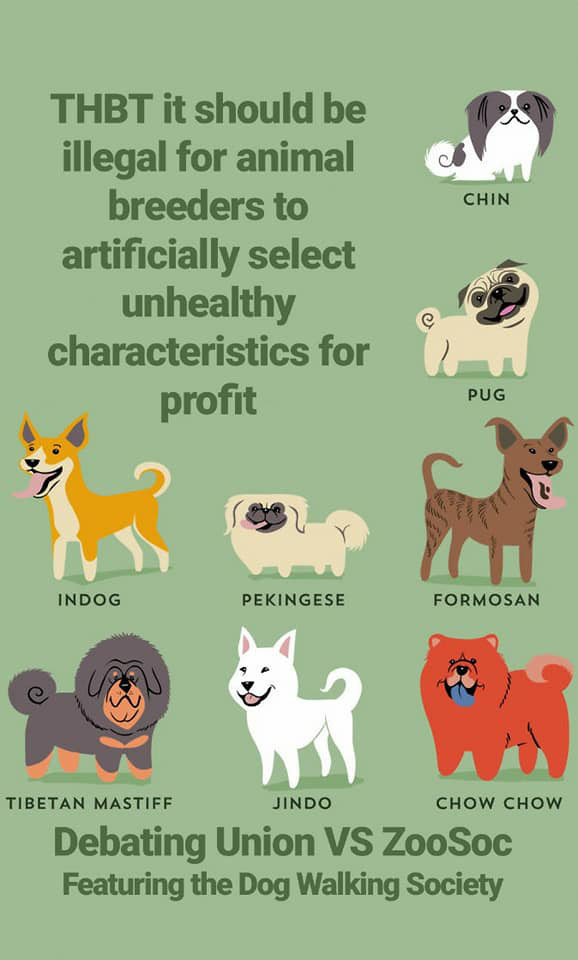 On January 30th, the Debating Union went head to head in a competitive debate with Zoology Society, in front of an audience that nearly packed the entirety of Wheldon Lecture Theater. Each competitor had the opportunity to defend or oppose the motion, “It should be illegal for animal breeders to artificially select unhealthy characteristics for profit.” The side arguing for the motion consisted of four extremely passionate zoology students, whilst the opposing side was filled by active and talented members of the Debating Union.

Prior to the beginning of the debate, the tone of the audience appeared to be unanimously in favor of the motion, with a tally showing only one person definitely in favor of the opposition. Throughout the debate, members of each position gave compelling arguments, and were met with overwhelming enthusiasm from the crowd. By the end of the session, only five people were opposed to the motion, making Zoology Society the winners of the debate by a large margin.

If competitive debating like this is of interest to you, the Debating Union meets for competitive sessions every Sunday from 8 to 9 PM. For more information, contact Natalia Taylor-Aurrekoetxea at psu670@bangor.ac.uk.