On Thursday October 31, students in UK universities waited in vain for their lecturers, as they protested against low pay offers in the largest strike for years.

University staff were offered a pay increase of just 1% which means that the real-time cuts have been 13% since 2008, what Will Hutton of The Guardian calls “one of the largest sustained wage cuts any profession has seen since the Second World War”.

John Hamilton, regional officer for UNITE, said “You know the saying ‘we’re all in this together’? I wish that was true.” Meanwhile, university leaders are enjoying increased pay and benefits, adding to the inequality in the lowest paid sector in the UK.

The graph below shows the overall surplus of income to expenditure in the sector, which has fallen during the previous year but is still over £1.1 billion. 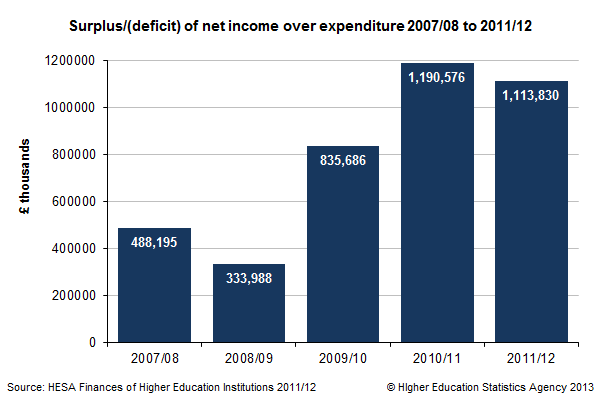 Nathan Abrams, lecturer at Bangor University, describes the strike as a “last resort”, adding that “people dismiss lecturers as whingers, but it takes a lot to get a lecturer on strike”. Union members at the picket line agreed with Abrams, some saying the last time their last day of action was 22 years ago, emphasising the severity of the situation.

Mike McCartney, Unite National officer of education, said “[The employees’] contribution should be recognised with a substantial pay rise as household bills, such as energy, are going through the roof. We hope that the strike will focus employers’ minds and they realise their staff are their most important asset and reward them accordingly.”

Staff and union representatives at the picket line at Bangor University expressed hope that the government would negotiate a new, higher, pay offer to higher education staff.

“All we are asking is that we are paid fairly and we know that this is affordable. We are worth more than 1%”, Edkins said.