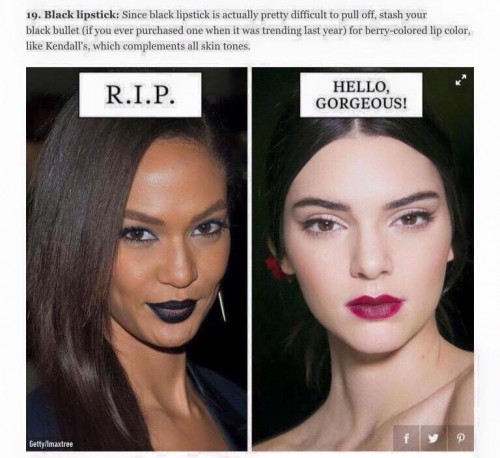 Cosmopolitan magazine have recently published a beauty feature that describes old make up trends by labelling them “R.I.P” and comparing them to up to date trends, labelling these “Hello Gorgeous!” But when you look at the feature and the pictures provided you see a disturbing pattern emerge.

Every single “Hello Gorgeous!” girl in the example is a white woman, with the exception of Nicole Richie who is biracial. The “R.I.P” women on the other hand, more often than wanted ended up being a woman of colour. The editor of Cosmopolitan have apologised for any offense they might have caused and it was not their intension for women of colour to be portrayed this way but there are way too many examples, 21 in total, for this to be a mistake and taken so lightly.

Social media was an up raw of people expressing their disgusted and frustration that in our world today we still suffer from blatant racism, with many readers saying they are boycotting the magazine. One woman took to Twitter and wrote “Rare to see women of colour in a mainstream magazine. And when you do its to tell us we are ugly…” Another says “Boycott Cosmopolitan. Down right disgusting!”

This issue has raised an aching point in the magazine and publishing world that we need more diversity on the pages of magazines with mostly white celebrities or white models getting the front covers for example. This one just one step in recognising the bigger issue.