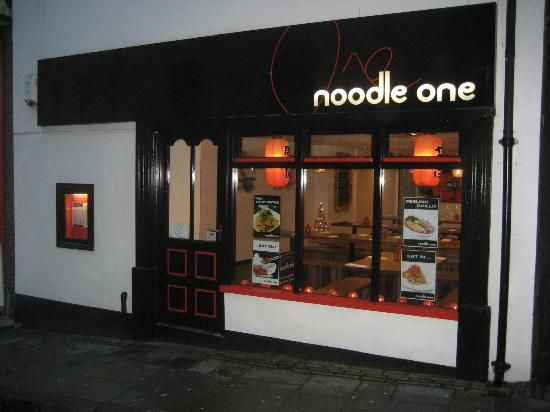 This month Seren decided to find out a little bit more about the winner of Seren’s Local Business Awards: Best Restaurant and met up with co-owner Mary Phillips.

How long has Noodle One been around?

I think it’s been around for about five or six years now. It was quite well established which was nice. It made it easier for us.

How long have you been in Bangor as a business?

Well, we bought Noodle One in October last year but my partner, Iwan and I have both been previous employees here. We’ve had a good ten months so far. I went to talk to the previous owner one day and said, ‘Look, I know this is a bit out of the blue but if you ever do want to sell this place, can you let me know?’ He said, ‘Well if you can keep a secret? It’s actually for sale on the internet.’ So I went straight to have a look. So that’s how it came about, I thought ‘Brilliant!’

Noodle One obviously means something to you:

Yeah, I’ve always had happy memories here, it was a really nice place to work. I always wanted my own business, not necessarily a restaurant, just something and it seemed to work well because we’d already worked here. Iwan was comfortable with the food and I was comfortable on how to run the front of house and my dad had his own businesses when I was growing up so we had him to fall back on to help us with the actual business side of it. We really wanted something to sink our teeth into and this is what we went for in the end. Brave or stupid, (laughs) I’m not sure which.

What do you want to achieve from the business?

We wanted to mainly concentrate on the consistency of the food, of making sure that no matter what chef was on, what time of day it is, what day of the week, the food was always the same. It was an issue before and we’ve concentrated really hard on it. I think that’s really important, people want to come here and have the same experience every time. We get a lot of regulars in here so if it is different one time they’ll spot it straight away. You really have to be right on the ball. People are not shy in telling you if it’s not right. (laughs)

What do you offer in Bangor that other restaurants don’t?

People should come here because we’ve got all the credentials, we’ve worked very hard to get to 5/5 hygiene rating. We’ve won the Seren Best Business Award so we must be doing something right. We’ve also got the TripAdvisor Certificate of Excellence and that’s something we’re quite proud of. We were fifth in Bangor on TripAdvisor, we have dropped to ninth at the moment but we are working really hard to back up to where we feel we deserve to be.

TripAdvisor is a good way to learn what people think:

It’s a really big thing. It’s a double edged sword, though, for a business owner. It’s great that you get all the positive feedback but equally, its quite open to subjective interpretation. This business is like our baby, I can get quite upset sometimes if I get a bit of criticism on TripAdvisor. Obviously, I appreciate the criticism and we always try and fix what the issue was. It feels very strange sometimes. We haven’t actually had very many bad things on TripAdvisor. We had one really bad one, we had just opened and we were still flailing around, so that was quite hard to take. So since then we’ve tried really hard to make sure everyone leaves having had a nice time. We are not perfect, we make mistakes but if you are straight and open with the customer then generally you’ll find they leave happy in the end.

What challenges do you face running an independent business?

One of the things I found quite strange is that franchises seem to have deals set up with the suppliers that unfortunately don’t seem to be that available for independent businesses. So that’s a bit tough to take sometimes. One of the hardest aspects is keeping everything available on the menu because we only use fresh food here, we don’t pre-cook anything. We had to sit down right at the beginning and make a decision, are we going to be fresh and accept that we’re not going to be able to offer everything every time or are we going to make sure everything is on the menu but sacrifice quality and we just decided that we would rather run out and make sure it’s all fresh. It’s very unpredictable how busy you are. We can sometimes be busier on a Wednesday than we are on a Saturday, its hard to plan for that. Quick runs to Asda to go and grab some sugar snap peas happens a lot. We’re really grateful for that.

Getting established for other independent businesses can be difficult but you’ve been lucky there:

That’s one thing we were quite grateful of, everyone knew about Noodle One but that’s a double edged sword as well because you take the good but also the bad aspects of the previous business so you have to weigh up the pros and the cons of taking on an existing business.

Why did you decide to keep the name ‘Noodle One’?

When we were looking into buying Noodle One, we were looking at other places as well so we weren’t tunnel-visioned on Noodle One but we realised as a business, it should work, so we decided to keep it. We felt it was the right time to be getting into this sort of cuisine, Japanese is kind of becoming a new trend. It was the up and coming new fad.

How do people react to the menu?

We still get people who are sceptical about the menu or scared even, so we try to help them into it. The first day when I worked here, I looked at the menu and thought I’m never going to understand any of this, I can’t even read most of it. It can be quite tricky training up new staff because you try and teach them what’s in a dish. Customers do look to the staff to help them so it takes some intense training to get the staff up to scratch just to be able to answer the questions, especially for the first couple of months. We had a chef that started here who kept calling all the dishes wrong but everyone gets it eventually.

How do you see the business developing in the next five years?

We are looking into what to do next, we feel a bit more settled here now, and we’re under control most days.(laughs) There’s the possibility of a Noodle Two somewhere else, we did look in Llandudno for a little while. There’s a possibility of an outside catering aspect for Noodle One. We’ve spoken to a local businessman who’s sorting out an events company, we are in talks with him about getting on board. So we’ve got a few things up in the air. We haven’t decided on anything at the moment. We definitely want to expand in some shape or form, just can’t decide how yet. (laughs) Although we’re settled, the idea of taking on something else does still terrify a little bit. So we might give it another six months (laughs) and get through the busy Christmas period. We have actually hired a dessert chef, whose chief job is to focus on desserts because when we first arrived we carried on buying desserts in because we were at full stretch just doing the main menu (laughs) but now we’re slowly changing to homemade which I think is quite important. It shows a bit more care to have homemade and they are starting to sell really well.

Its all about the challenge of running a business isn’t it?

If you had to convince someone to come to Noodle One in five words what would you say?

Something a little bit different.

All the staff are friendly, we all have a good laugh. If the staff are enjoying their work, it will show on their faces. There’s little, tiny smiley face stickers dotted around the back yard and it always makes people smile when they spot a new one that they haven’t seen before. We just have a bit of fun really. As long as the job gets done then we are quite relaxed, we poke fun at each other. It’s quite a nice place to be, really. I think everyone that works here enjoys working here and I think that’s half the battle. If the staff want you to do well and want you to succeed then you can’t really ask for much more. So we are very lucky with the staff that we’ve got. They’re all on our side and they all want us to do well, so we feel really lucky to have them.

How many staff members do you have here?

We have seven members of staff in total. Chefs, waitresses and a cleaner.

How did you find out about the Seren Business Awards and how did it feel to win it?

It felt great to win it. It was really good, we were so pleased. I found out about it through one of my staff, one of my waitresses came in and asked me if I’d heard about this award. So we put a blackboard up in the restaurant saying ‘if you like what you’re eating, vote for us’. Yeah it felt great to win, especially to get it within your first year. It felt really nice to get recognised after the first six months of really hard work, to know it wasn’t for nothing. We were going in the right direction and we just need to keep doing what we were doing.

Is there anything else you want to add?

Just watch this space, we’re branching out. Like us on Facebook and keep up with what we’re getting on with. We do put offers on Facebook sometimes so it’s worth watching it for that. It’s to keep us busy and to reward our Facebook followers. We do get quite a lot of regulars and it is quite nice that the staff are getting to know them, it’s almost like they’re your friends as well, which is really nice.