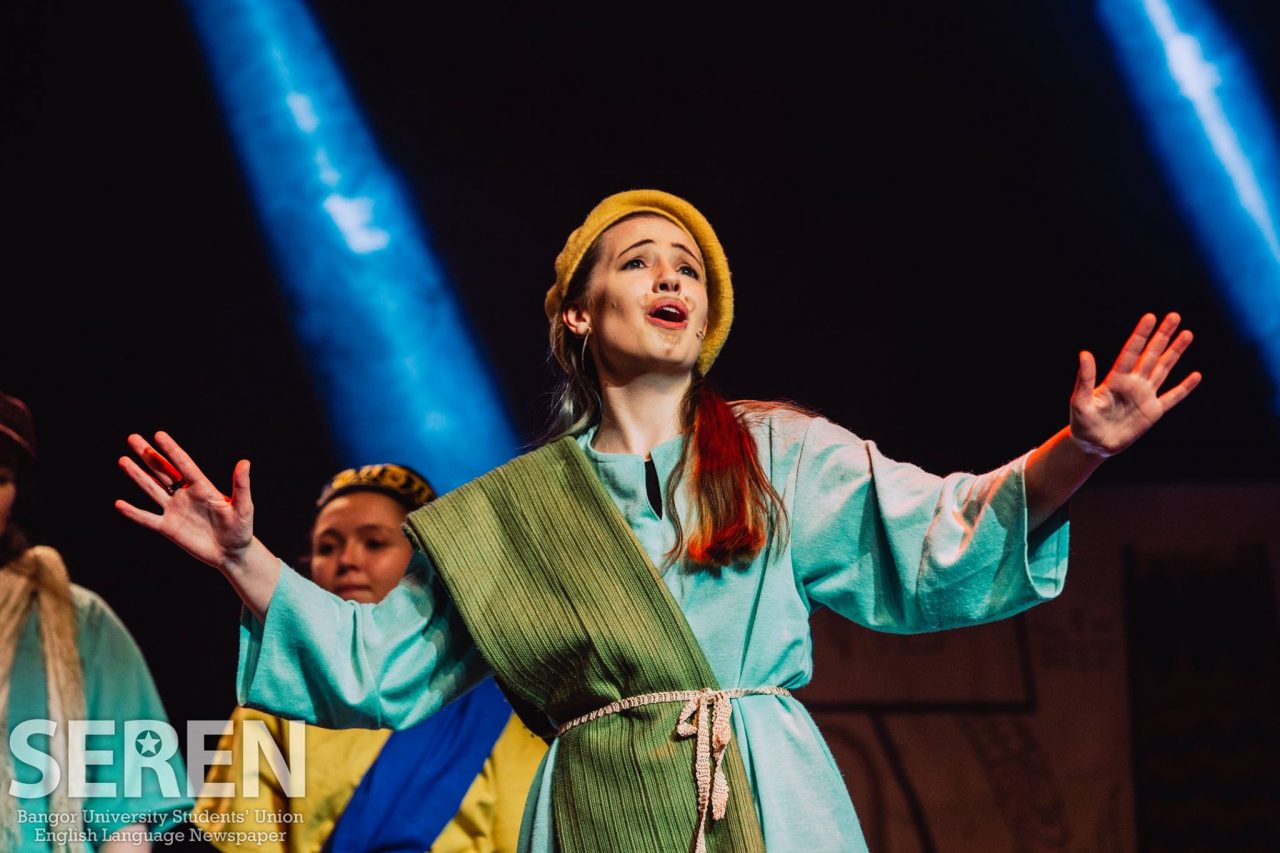 Every spring for three years, the Bangor Musical Theatre Society has arrived in Pontio to bring in their main show of the year. Looking back to Fame (2017) and High School Musical (2018), the previous Pontio shows have paved the way to family-friendly feel-good musicals. The auditorium full, we have grown to expect flashy group songs, sentimental solos, lovably humorous chorus characters and at least two confetti cannons in the finale.

However, moving from the American high schools to Ancient Near East is no easy feat. Joseph is the brainchild of Tim Rice’s penmanship and Andrew Lloyd Webber’s musical mind, and goes as far back as 1968. Originally based on the ‘Coat of many colours’ from the Book of Genesis, the show was the first joint production by the veteran duo of musicals. After versions of the scripts were produced mainly in high schools and theatre festivals, the modern version of the extended script was taken to the West End in 1974, and later to Broadway in 1982 – the latter sparking the era of revivals, tours and the 1999 film starring Donny Osmond.

In this sense, SODA’s 2019 production of Joseph (directed by Sara Wilson) is 51 years in the making. The choice of show seems to nevertheless be spot-on, given its accessibility to students and adaptability to all kinds of venues.

Upon the show’s opening, we meet the Narrator (Daniel Fay), whose central place in the story is by no means shadowed by the mystical entrance – popping up from the theatre floor, he rises and hovers in the air only to nonchalantly transition upstage and deliver the introductory song to the audience. The Narrator’s songs are delivered with comfortable and expressive vocals; Fay’s stage presence is active and humorous especially in interaction with the chorus – and Joseph, of course.

Speaking of, another surprising entrance strategy is revealed as Joseph (Olivia Young) joins us, walking and singing Any Dream Will Do through the auditorium. Young portrays the title role with ease and strength especially in the friendly interactions with the Narrator. Her vocals, despite having to adapt to the classically tenor role, are compelling and bring softness to the well-known songs.

Supporting the leading duo is SODA’s large cast, who successfully form the foundation of the performance. Joseph’s 11 brothers lead spotlight to many plot points of the show, and provide us with plenty of comic moments, some captivating hats and stunning solo vocals – the many fresh faces will surely be coming back as future leads.

Other gems of the chorus group include Mr. and Mrs Potiphar (David Keeble and Caitlin Riley), who entrance us with comic scenarios early on in the show, as well as the Pharaoh (Terrence Wang). As some of the most memorable comic moments of the show, the Pharaoh’s impressively Elvis-like vocals as well as his excited and dynamic dancing steal the show – receiving thunderous applause after his solo Song of the King. Finally, a special mention must be granted to the Sheep, strutting to the stage only to be killed by Joseph’s brothers – and having to strut offstage in his comical afterlife.

Overall, the chorus delivers their responsibilities of choir as well as dancers with confidence and positivity. Group numbers, such as One More Angel in Heaven and Go, Go, Go Joseph are active, joyful and make the audience wish they could join in. The choreography (Farah Spiers) is enjoyable, impressive and well-suited to the production, with a variety of moves suitable for all actors who go through many choreographed numbers with stamina.

The staging of the show has remained bare – which is well-suited to the large cast production. Funnily enough, the colourful cast fill the stage to its brim with only a few back wall sets behind them. The staging and choreography includes all areas of the stage and keeps the show feeling new and exciting. Techwise, the show includes some excellent atmosphere via the light design. The colours and lights adapt to the scenes well. For example, the projected spots symbolise the bars of a prison cell in “Close Every Door” which elevate the scene even further.

The music of the performance is brought by an impressive in-house student pit band (Musical Directors: Daniel Greaney and Tim Hawkes) Instant transitions to timed musical numbers are seamless, which shows a fine level of interaction with actors and the stage. While an off-tune violin might have sneaked into the overture, the pit band still offers a highly professional and enjoyable musical show.

As for the final reception, one can safely say the audience loved the show. Friends of the cast were in standing ovation, and everyone else closely behind – all thoroughly immersed by the end of the show. SODA’s repertoire has seen a shift towards large musical productions ever since Pontio was opened to societies’ use – and with Joseph, it is easy to see why this has paid off. Year after year, fans of musicals find their way to join the society, and each new cast grows. Stakes are up next year for SODA to find new, exciting musicals for their members, as well as the eager audience in Bangor.

And what about the confetti cannons?

Four! It seems the stakes have upped here too.