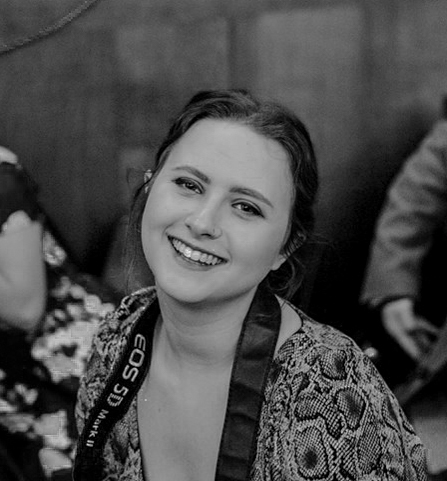 Hannah Grimston is the president of the Film Society and a member of the English Dramatics Society.  She is a 3rd year Creative Studies student in the School of Music and Media, and wants to be a playwright in the future.

Why did you choose to be a member of the English Dramatics Society?

I was introduced to the society in the 2nd semester of my first year through Byron Dean. I later went on to work on his play for the Conwy One-Act Festival. I made a lots of friends in the society, it was very welcoming and very warm, plus they do quite serious performances which is what I like to do.

What made you want to become a playwright?

What I wanted to be has changed quite a lot over the years; I thought I was settled on wanting to be like an editor for a fashion magazine but I’ve been writing for theatre since I was very very young. I first wrote a proper play when I was doing GCSE‘s, simply because I started with drama through acting. I felt there were no roles that I wanted to portray that I was introduced to.
I was introduced to a play that my teacher thought it would be a good idea for my group to do, but it didn‘t sit right with me. So, I was like “What if I did my own?“ and I moved on from there.

How many plays have you written?

This is my technically fifth, however one is ongoing, which is the dissertation that I am writing.

What is the main plot and theme surrounding it?

They Will Be Like Shadows is about five girls that have been held captive in a bunker. You see their stories and their life. It explores memories, quality of life and also looks at the person that has kidnapped them. It is basically about telling stories; what I’ve done is put it in an arena where it forces people to tell the truth and share it, to go to back into their memories, even if they are not the happiest ones.

What inspired you to come up with this play?

There are a lot of things I take inspiration from. I think I’ve been obsessed with the idea of kidnapping for a very long time but never written anything about it. I think it is such an interesting concept, because it is something that happens every single day, so why not write about it? Certain people inspire me. I’m doing my dissertation on someone called Sarah Kane, who’s a massive influence. People like Angela Carter, certain songwriters.

How was the writing process for this play?

I started this play at the end of last year. I wrote it mostly over the summer of this year. I was just trying to do something new. It’s always been a passion project to write something like this. But I really wanted to experiment with the form and the monologues, and create something this society would love to do; they were looking for some modern plays and monologues. It was quite a long process. Some of it was awful, but it’s definitely the longest play I’ve ever written. I had to cut it down, because it was, maybe, perhaps too long; there were bits that were really clunky, and I still think there are still bits that need work; that’s what I’m planning to do with the actors. That’s the freedom that we have, working with a play that has no rights because if actors suggest to me something, then we have the freedom to change it.

How is the process from play to show then?

I’m co-directing with Harry Peaker. So far, we’ve had a read-through, which was eye opening. I have an idea for a set, but we need to work within the constraints of the theatre and what’s actually doable for the society, for the budget, and the feasibility of moving sets around.

What about the actors? How do they portray the characters?

It’s early steps. So far, I’m happy; they’re an amazing cast. Everyone who auditioned blew me away, and I had a difficult choice in who to cast, but I think I’ve a very strong cast and I’m excited to work with them. In the auditions, we looked at their movement; we did a thing called chair duets, which is from a group called Frantic Assembly, and I was astounded by what they produced in 20 minutes.
There’s so much buzz about it; I can’t wait to start rehearsing.

Are you thinking of exploring such concepts in the future?

My plays have always been very very dark. I think what I’m trying to learn more is a maturity when it comes to subjects like that. I don’t have experience with kidnapping. You could kind of say that it’s not my right to ask about it, but I want to focus more on emotional aspects that are more likely for me to put my experiences into. The last play that I did, without even realising, was a exploration of toxic masculinity. I think that’s something that’s so prevalent now, that I need to maybe go back to that sort of writing. It would be nice to do something a little bit different, and to make sure that my collection of work differs so that I’m not know for one thing.

What advice would you have for other writers?

Just do it, just get it done. One thing I love is just vomiting words on a page, as gross as that sounds. Just get all your thoughts down and play with later. If you just get all the words that you want to say, you can go back and edit later. With They Will Be Like Shadows, I wrote so many words, and went back and thought how they can be performed for the stage, and that’s where a lot of the changes actually came in. If you’re looking to write something, just go and write it. Watch shows, read plays, get as much experience as you can with the medium. And then just go and do it, don’t let anything stop you.

Would you encourage filmmakers to engage with theatre?

There are so many writers and directors who work within both media. As long as you know the differences between theatre and film, then you’re good to go.
I think there are ways you can incorporate both media, and maybe having experience in both is the best way forward.

‘They Will Be Like Shadows’ will be performed on the 10th – 12th May at 7pm in JP Theatre.