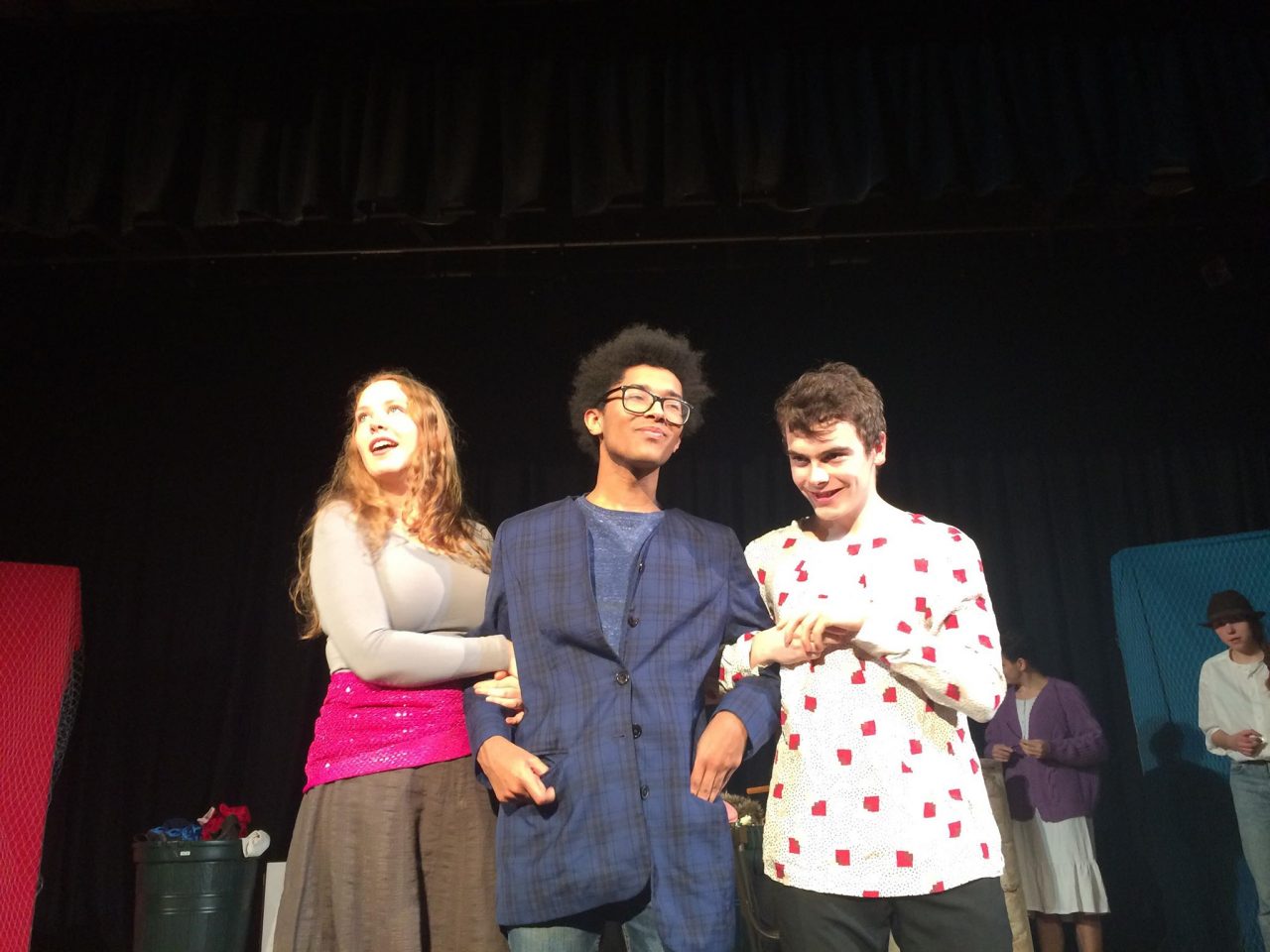 Originally a 1954 BBC Radio play, Dylan Thomas’ distinctively Welsh, working-class ‘Play for Voices’ stands out in the canon of modernist literature for its seductive combination of poetry and playscript. Set inside the hearts and minds of the inhabitants of the fictional Llareggub, exploring their dreams, fears and loves, the text itself is taught on a second year English Literature module here at Bangor. It is a somewhat left-field choice for the English Drama Society’s mid-year production; the slot that always draws the Soc’s largest audience, and has previously been occupied by more conventional theatre fare – a spooky, intense staging of Arthur Miller’s The Crucible (2018) and a colourful, queer-centric Romeo and Juliet (2017). But this topsy-turvy text that could have been a logistical nightmare is brought to the Bangor stage as a blazing, confident triumph.

A cast of fifteen students whizz through innumerable quick changes of costume and characterisation to play multifarious Llareggub residents, anchored together by the excellent Nadine Kaur as The Narrator, who brings an absorbing warmth and wonder to Thomas’s prose poetry (and has the unenviable task of being permanently on stage for the entire show.) Kaur’s fourth-wall-breaking storyteller, gazing enchanted at the action, is the perfect device for sucking the audience further into the dream world. Four performers have been selected to handle the bulk of the characters, subverting the tradition of Chorus members being background figures, here the Chorus members lead the action; Harry Peaker absolutely smashes it through a vast array of accents and physicalities, variously camp, doddery and bloodthirsty from one minute to the next; Megan Owen is superbly confident in her characters and chimes perfectly with the script’s language, her comedic flourishes – and sadder notes – always looking effortless and natural; Elliott Day is clearly having the time of his life whatever the role, and understands exactly when to play it big and theatrical, and when to draw the audience in with quieter, more tentative monologue; and BEDS newcomer Mae Bernard is another revelation, comfortably handling a challenging array of parts with huge energy, and the solid technical grounding of an experienced performer, which will hopefully serve well in more plays, as this fresher could definitely become a mainstay of the student stage in the future.

Any audience members coming to the performance expecting a purist adaption akin to the rhythmic, tender Welsh vocality of the BBC original may consider some of the creative choices sacrilegious; the bombastic and sometimes wildly improvised style taking Thomas’s script in adventurous new directions – and generally ditching Welsh accents for most of the characters. But it would have unreasonably restrictive to force the students to just mimic Richard Burton et al’s 1950’s recording, and the trust that director Briony Collins has clearly put in her cast to freewheel and create with the original material has paid off; by having the actors find their own new voices and energies for the parts, she has evidently made them more passionate and invested in their performances, and this sense of ownership on the part of the performers is the secret ingredient that gives the show the best kind of kick up the a**, and really lights it up as properly entertaining.
It means too, that there is great diversity across the performances, including in the more peripheral cast. One of the funniest turns in Under Milk Wood is from Laura Łabno, who plays two contrasting old men; the blissfully music-obsessed – and almost adorable – Organ Morgan, and the hilariously sinister, murder-obsessed Mr. Pugh, fantasising about poisoning Mrs. Pugh, played with full-bodied Northern scowl by Barnaby Omar, who is also wonderfully convincing as the dainty, lovestruck Myfanwy Price. Elsewhere in Llareggub, Patrice Kerrigan really shines as the Reverend Eli Jenkins; a divine choice for the clergyman, Kerrigan radiates hope – handling long verse passages with real nuance and musicality. Lots of the actors are great at delivering script, but Kerrigan stands out at delivering poetry.

Frequently centre stage in a more fixed role is Will Aspinall as Captain Cat, a washed-up sea captain now going blind in a wheelchair, and one of Thomas’s more extensively written parts. Aspinall is a performer who holds nothing back, and he assuredly conveys both the old man’s zest for life, and his more haunting losses with equal passion. Indeed, it Aspinall’s moments of guttural emotion that are among the most powerful in the play – the Captain’s heart still very much out there in the waves while his life crumbles gently on the land.
But the best performance in Under Milk Wood is undoubtedly that of Dominika Ogorek, as downtrodden village daughters Lily Smalls and Polly Garter. Polly, mopping the washhouse floors, sings mournfully of the man she has loved and lost, and Lily, lacking independence under her irascible mother, gazes into the bathroom mirror, wishing she were prettier. Ogorek’s acapella singing is hauntingly beautiful and tender, and her monologues swell with such spellbinding fragility. Her soft and disarmingly real portrayal brings the whole chaotic carnival of this madcap production down to the ghosts in one girl’s eyes, and surely Dylan Thomas would have been proud of that.